Open admiration for the art market has always been a taboo within museums, but that has not stopped institutions across the world from staging exhibitions about the dealers who helped shape modern art. The Museum of Modern Art did a show about Ambroise Vollard back in the ’70s; the Philadelphia Museum of Art mounted one about Paul Durand-Ruel in 2015; the Centre Pompidou has honored Daniel-Henry Kahnweiler with a survey. Looking at all of these venerated dealers who boosted the Impressionists and the modernists after them, a certain picture emerges: the gallerist as a well-to-do white man who is suave, forward-thinking, good with money.

All of which may explain why the French dealer Berthe Weill may not have joined their ranks. She was a middle-class Jewish woman who never even tried to blend in with people like Vollard, whom she openly hated. She tended to show art that didn’t sell, which consistently kept her one step away from financial ruin. Still, her Paris gallery offered Picasso some of his initial exposure, Diego Rivera his first exhibition in the City of Light, and women artists such as Sonia Lewitska a first chance at critical attention.

It also may explain why, until this summer, there had never been an English translation of Weill’s quirky memoir Pow! Right in the Eye. And what a good thing it is that this book has finally arrived.

Weill, whose gallery operated from 1901 to 1941, was a polarizing figure during her lifetime, and she knew it. “I’m stiff-necked, forbidding, and I have a difficult personality,” she writes. It’s hard to argue with that, based on what she recounts in these memoirs, which were published during her lifetime for all to see.

Throughout this book, Weill gets into tiffs with other dealers, fights back when tax officials go after her, and decries the taste of some of the colleagues whom she held close. She even included an appendix in which she portrays Vollard, the dealer who helped launch the careers of artists like Paul Cézanne and Vincent van Gogh, as a backroom swindler and a bumbling idiot. “I’m sure he will confirm that what I’ve written is the exact truth,” Weill sarcastically writes. “But I have to say that among dealers, he is one of the few who was never deceitful.”

Part of the reason Weill could act as a truth teller in this way is because of her unusual position as a woman among a sea of male dealers. True to form, this translation is the work of another female dealer, Julie Saul, who died this past February. To see it into the world, Saul collaborated with Lynn Gumpert, the director of NYU’s Grey Art Gallery, who is set to curating show about Weill that is due to open in 2024. Gumpert served as the book’s editor, with Saul and Gumpert providing the book’s foreword. William Rodarmor provided the vibrant translation from the French.

A plucky, gimlet-eyed observer of all around her, Weill was unwilling to ignore the misogyny that was all around her. In 1925, when the Musée des Arts Décoratifs mounted a big survey of art since Impressionism, Suzanne Valadon, an artist who Weill wrote “matters today,” was left out by the man who curated it. “So the history of painting by women depends on who the author likes or feels is worthwhile; artists he doesn’t like are stricken from the history of art,” she concludes.

Pow! begins with the death of a man, Salvator Mayer, whose Paris gallery was where Weill got her start. That was in 1896, and in the years afterward, Weill began selling posters and books—and nearly going bankrupt constantly. She was never good with finances. “It’s not like me to save up so I could finally have a little steak every day when I no longer had teeth to chew it,” she writes. But she forged on, and in 1901 she opened Galerie B. Weill, which for most of its life was a money-draining operation.

Early on, there were some big successes, including a Picasso show staged the year that the gallery was founded. That show included Le Moulin de la Galette (ca. 1900), a key early work that is now owned by the Guggenheim Museum in New York. She sold it to the newspaper publisher Alfred Huc for 250 francs. “At least there were collectors (so few!) interested in emerging painters,” she writes. (The term “emerging” is an anachronism—it didn’t exist until recently—but it is a useful one here, since Weill’s prose style was so idiosyncratic.)

Not all of the “Jeunes,” as Weill called them, took off in quite the same way as Picasso. Pow! is filled with the names of many artists whose names will be unfamiliar to most, since she enumerates virtually every show she did and does so by relying solely on people’s last names. (The book’s editors have put together a nearly 500-person glossary, but paging back and forth proves to be of little use.) This way of cataloguing information can be a bit cumbersome, but it’s leavened by Weill’s digressions into shoptalk about the Paris art scene. 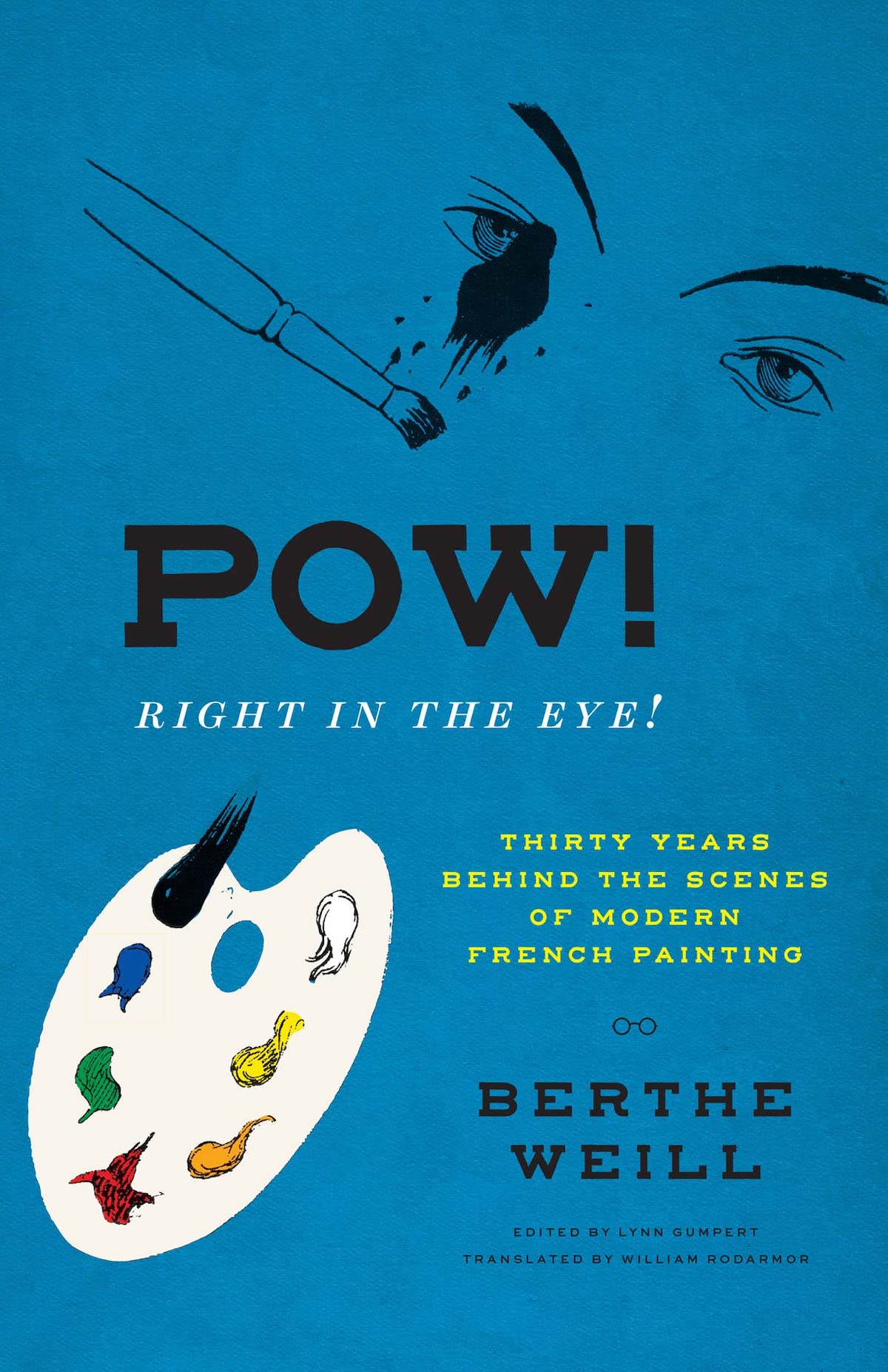 Weill may very well have been the best gossip of the French art scene of the early 20th century, as Pow! goes to show. It’s filled with memorable barbs and spats, including one revolving around allegations of a crumbling friendship between André Derain and Maurice de Vlaminck, two leading painters of the Fauvist movement. “Weren’t those two friends?” Weill asks. “They were . . . or used to be.” She then claims she one time hid in Vlaminck’s home and listened in as an unidentified person upbraided the painter using insults as vibrant as the colors of his canvases. She reproduces this apparent conversation in full, noting every time that Vlaminck stuttered his way through his responses.

Sprinkled amid all the hearsay are accounts of some landmark events in art history, such as Weill’s infamous 1917 Amedeo Modigliani show, the only solo exhibition the artist had during his lifetime. At the time, Weill’s gallery was situated near a police station, and a commissaire was not pleased with Modigliani’s paintings of sprawled-out nude women because these odalisques had pubic hair. The commissaire threatened to send a squad of cops to remove the paintings—“A pastoral image . . . each cop in the squad carrying a Modigliani nude in his arms . . . cinema,” Weill writes—but they never had to because she closed the show mid-opening and de-installed the works herself. She ended up having to buy the paintings to compensate Modigliani’s primary dealer. Today, similar works to those paintings sell for more than $100 million each.

The overall message of Pow! is one of resistance in the face of an elitist, male-dominated art world. That’s partly because it closes out in 1926, 15 years before Weill’s gallery folded amid pressure from the Nazis, who had by then occupied France. Weill could not have known this would happen when she compiled this book in 1933, and so Pow! strikes a positive note in its final pages.

Closing out, Weill writes that financial success is not the same as having actual talent, and naturally, this means that some of her artists had yet to find recognition. As if to accidentally prove her point, some of the artists Weill discusses whose work sold well—André Lhote, for example—are now basically nobodies. By contrast, some of the characters who exist at the margins here—Meta Vaux Warrick Fuller, a sculptor associated with the Harlem Renaissance whose work is in the Venice Biennale right now, to name just one—are of greater note in some quarters.

Now as then, betting big on stars who burn bright is often a losing game, art historically speaking. It leads to short-term financial dividends and little else beyond momentary fame, so Weill might ask: Why even bother? Writing of the speculators, Weill says, “A few may have played along with this dangerous game, and unfortunately are now its biggest victims. The lesson is a hard one, but it will be profitable.”

Amazon’s About to Change the NFL Ad Game. Get In While You Still Can