Set in the grassy fields of California’s Sonoma Valley are a group of 25 figures who appear to be hysterically laughing, their hands clutching their ears. From a distance, they look like a group of men. Up close, however, one realizes it’s an artwork—and just one of many in the surrounding area.

That work is Yue Minjun’s Contemporary Terracotta Warriors (2005), and it is one of many owned by Hong Kong–based collectors Allan and Mei Warburg, who have amassed a significant collection of artworks now housed on the 200-acre vineyard, the Donum Estate. Here, works by Ai Weiwei, Robert Indiana, Doug Aitken, and many more line the northern Californian landscape. And this is more than a private collection, too: the couple’s art appears within vineyards where wine is produced.

“The inspiration [for the Donum estate sculpture collection] really came from wanting to create this combination of wine, art, and landscape,” said Allan, who co-owns Bestseller Fashion Company, one of the largest clothing retailers in Asia. “It’s just such a different experience than being in a museum.”

But, for Warburg, the Donum Estate is more than a merger between art and commerce. “I don’t consider art a business for me at all,” Warburg said with a laugh. “I’m a collector. I’ve never sold anything.”

Of the 50 works in the collection, which has grown steadily since 2015, around a third are commissioned directly by Warburg. Many are by Chinese artists. Among the earliest works to be installed was Zhan Wang’s Artificial Rock No. 126 (2007), made after the Chinese ‘scholar’s rock’ in stainless steel. “Because we collected him many years before and knew him well, that seemed like the obvious one to start with,” said Warburg. Elsewhere, there is an Ai series of 12 standing bronze animal heads, each representing a Chinese zodiac sign.

Danish artists are well-represented in the collection, too: Jens-Flemming Sørensen, Fredrik Wretman, and Jeppe Hein all have works here. A Hein work due to be exhibited there soon acts as an example of the offbeat art housed at the Donum Estate. Titled Chardonnay Mirror Balloon, Rose Mirror Balloon, and Redwine Mirror Balloon (2020), it comprises three metallic balloons positioned to appear as if hovering in the air, each with colors based on several of Donum’s wines. The new work is set to be displayed indoors at the estate’s visitor center designed by Danish architect David Thulstrup.

Because the pandemic that has imposed international travel restrictions, the usual large-scale commissions remain on hold. Yet, despite being less active that they were pre-pandemic, the Warburgs are still moving ahead with new acquisitions. A Tracey Emin painting is headed to the visitor’s center soon, and a set of multicolored totem sculptures by Ugo Rondinone are due to be installed at the estate. The Warburgs have developed close relationships with Hein, and Emin, as well as ones like Gao Weigang and Liu Xiaodong. “We became good friends with many of those artists,” Warburg said, remarking that when it comes to selecting new works to acquire, “it’s sometimes the relationship with the artist more than the work itself,” that is the deciding factor.

Among the Warburgs’ other recent purchases includes Robert Indiana’s LOVE (1965–66) sculpture, which he bought privately at Christie’s. With its Pop art aesthetic, the sculpture differs from much of the surrounding sculptures on the estate, but driven by impulse, he decided to buy it. 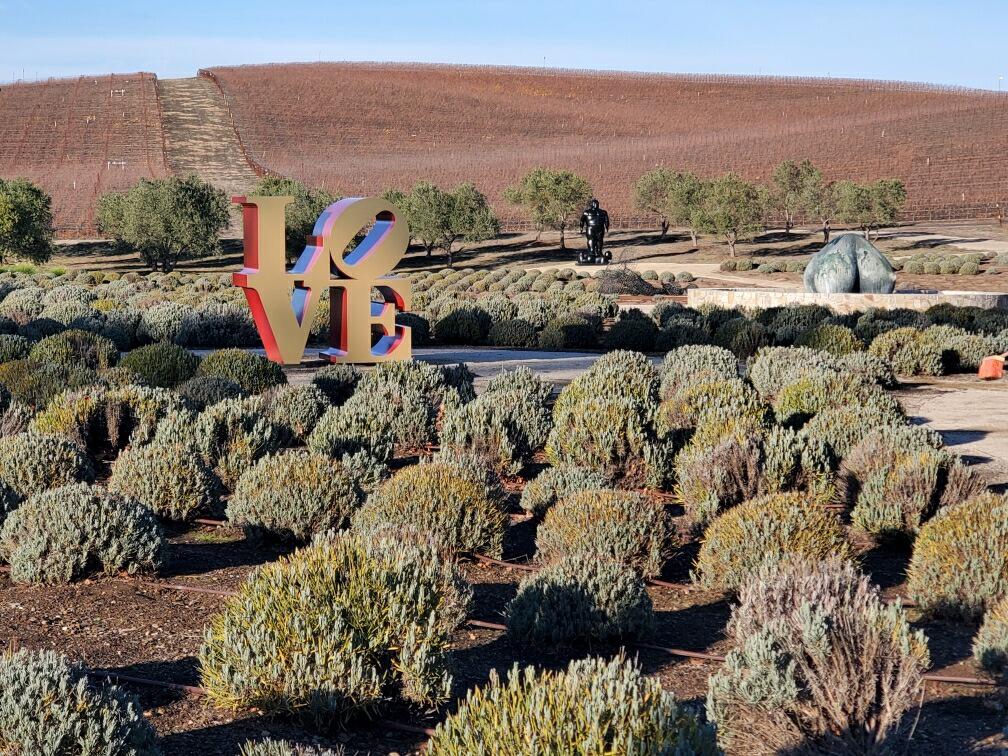 Before acquiring the Donum Estate in 2010, the Warburgs had been collecting for years, mainly in China, where they started living in the 1990s. Born in Denmark in 1967, Allan studied economics in his home country and later enrolled at Yunnan University in China. He then began working in the consumer products division of a Danish firm formerly known as East Asiatic Company. Eventually, he saw the region’s potential as an untapped market and later launched Bestseller Fashion Group China in 1996 with his business partner Dan Friis.

The early 2000s were a time of flux for Beijing’s cultural scene. A largely underground art scene was rising around alternative spaces like Factory 798, a string of artist studios setup in a former military complex. There, artists began creating outré works that tested the Chinese government’s tolerance for freedom of expression, at times even facing conflict with authorities. “There was this incredible explosion of creativity,” said Warburg. “I think it was felt the same way when the Berlin wall fell down.”

He then began going on studio visits and meeting artists in person, many of whom he would later create long-lasting ties. “Back then, you could simply go to most artist’s studio, and they were so interested in talking to you,” Warburg said. “Now, if you want to get access to good artists, you need to have an appointment and they need to figure out who you are. It’s very different now.”

The Donum winery was founded in 2001, and in 2010, when it was put up for sale, Warburg and a group of investors saw an opportune moment. “It was after the financial crisis and seemed like a very good price,” said Warburg. (He declined to state how much the group paid for it.) Initially, an art acquisition program was not part of the plan, but eventually, when the Warburgs became more familiar with the estate’s vast terrain, things shifted. “We realized how beautiful the landscape was,” he said.

Today, that property is home to more than 50 works, the majority of which are large-scale installations host to metallic forms and figures responding to the natural landscape. Among them is one by Chinese artist Gao Weigang, a mentee of Ai Weiwei and a long-standing friend of Warburg. Titled Maze (2017), it is composed of a grid of brass-coated steel tubes, its industrial materials mirroring the native grasses. “That was also a work where we spent a lot of time discussing what was the right thing for Donum,” said Warburg.

British artist Richard Hudson’s Love Me (2016), was one of the first artworks that was part of a now-robust commissioning program at Donum. When Hudson was producing artworks in China, Warburg arranged a meeting. “Over dinner in Beijing, we decided we should do a heart for Donum, and then we met over there and found a location,” said Warburg.

Warburg is fond of remarking that the collection is very personal, and indeed, it is largely the product of his and his wife’s imagination. Unlike most private collections, the Warburgs’ is not under the direction of a curator or art adviser. Instead, the two rely mostly on the advice of friends and colleagues with similar sensibilities. Among them is Danish art adviser and collector Jens Faurschou, who runs an eponymous foundation devoted to contemporary art with spaces in Beijing, Copenhagen, and New York. “We discuss artists I have been involved with over the years,” Faurschou said. “We often have the same interests.”

Faurschou recalls being introduced to the Warburgs through a staff member at the Denmark embassy in Beijing in 2009. From there, the collectors developed a friendship, with Faurschou eventually introducing them to artists and becoming involved in several of Donum’s major commissions, including Pascale Marthine Tayou’s Mikado Tree (2010), Danish-Norwegian duo Elmgreen and Dragset’s mirrored-silver figurative sculpture The Care of Oneself (2017), and Anslem Kiefer’s lead airplane Mohn und Gedächtnis (Poppy and Memory), 2017. The Warburgs took an interest in the Kiefer airplane following the adviser’s exhibition of the artist’s work at Copenhagen Contemporary, founded by Faurschou. “Mei and Allan thought that it would be fantastic if such an airplane could get a home,” Faurschou said.

Since they began collecting for Donum in 2015, the Warburgs amassed a major collection that now includes Jaume Plensa alongside Lynda Benglis, Keith Haring alongside Wim Delvoye, and Louise Bourgeois alongside Ai Weiwei. But perhaps no work looks—or sounds—quite like Doug Aitken’s Sonic Mountain (2018).

Originally, Warburg contacted Aitken (to whom he was introduced through Faurschou) to commission a version of his stainless-steel mirage house made for Southern California’s Desert X 2017 exhibition. “Doug Aitken came out to see the land and then came up with a completely different idea,” Faurschou said.

After spending six hours on site, the artist instead proposed a wind chime. The finished product ended up being a monumental stainless-steel work that is now installed in a eucalyptus grove, tucked among a set of trees, producing sound with moving winds. “It touches a lot of senses,” Warburg said. “You can hear it from many places, but you have to go and discover it.”