The East End of New York’s Long Island has been a locus of artistic activity for decades. Abstract Expressionism is deeply rooted in local lore around the likes of Jackson Pollock, Lee Krasner, and Willem de Kooning. Pop art’s presence can be found among the remnants of time spent “out east” by Roy Lichtenstein and Andy Warhol. And contemporary art continues to be made and appreciated in an area revered for its gorgeous light raking over pastoral farmland and serene seaside vistas. Summer brings the seasonal residents—and events like the Upstairs Art Fair, the 25th Annual Watermill Center Benefit, and the Midsummer Party at the Parrish Museum of Art, all in July. As the weather started to warm, ARTnews paid a visit to the Hamptons and nearby climes to meet longtime residents of the art scene—and some newer ones. 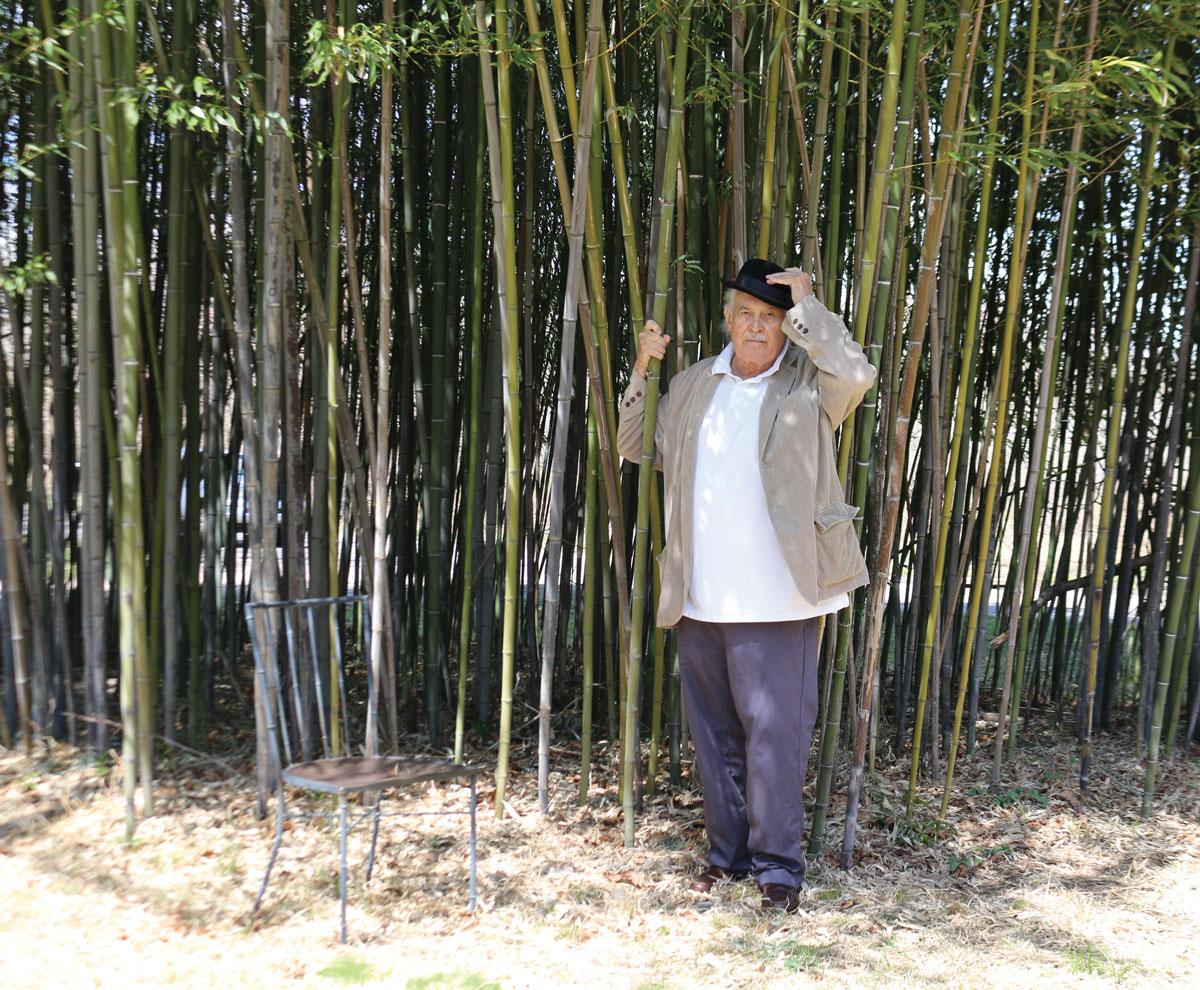 Sculptor and multimedia artist Keith Sonnier—the subject of a survey show at the Parrish Art Museum in Water Mill and an exhibition at the Dia Art Foundation’s Dan Flavin Art Institute in Bridgehampton, both opening in July—has kept a home in the Hamptons for 30 years. “I first came out in my twenties, rented a house on the water with friends, and then started coming to Sagaponack,” he said. “I fell in love with it.” Sonnier described a quieter but more stilted Hamptons art scene decades ago. “The art machine has grown—it’s made Long Island less conservative.” But his pleasures remain close to home. “I bought this home because of the tulip tree in front,” he said of his base in Bridgehampton—noting that Marie Antoinette is said to have ordered tulip trees from the area for planting at Versailles. “It’s one of the most amazing places in America.” 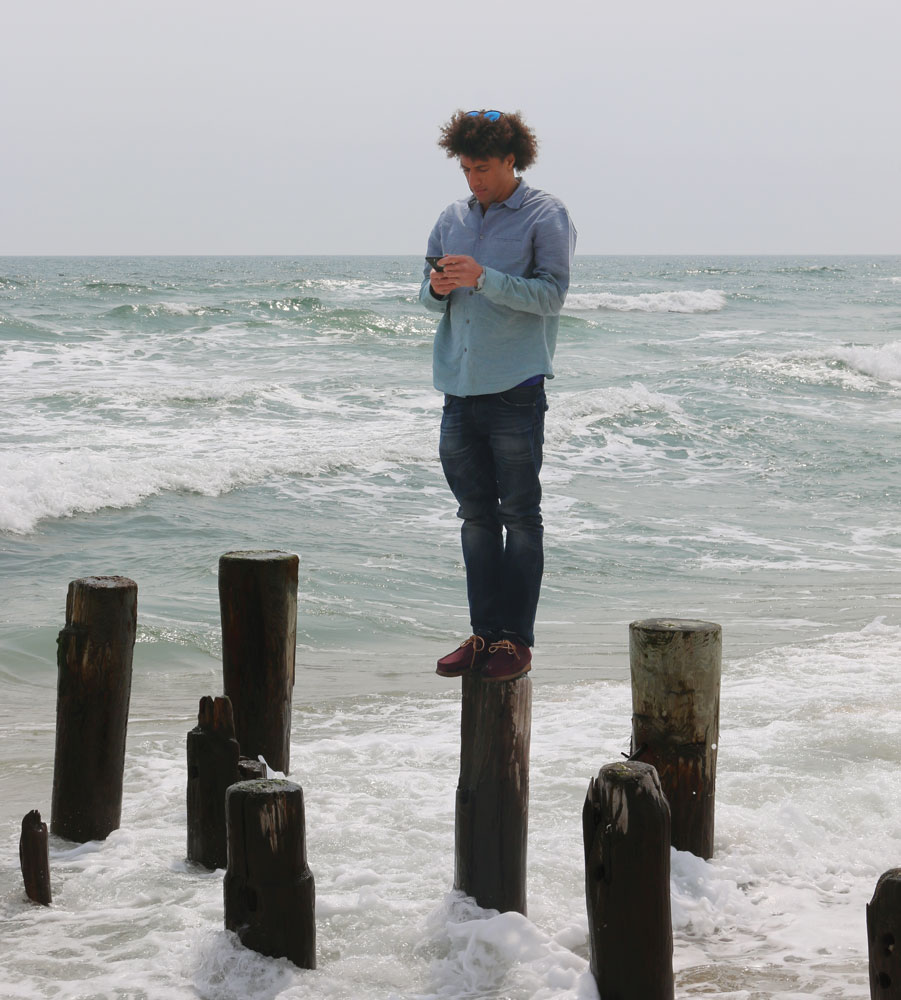 Tripoli Patterson is a professional surfer and gallerist who has lived in Germany, Bali, and New Zealand, but he decided to open his namesake gallery where he had formed his earliest memories. “The East End is where I was born, so setting my foundation here feels right,” he said. With mentorship from his late godmother, Lisa de Kooning (daughter of Willem), Patterson opened his gallery in 2009 and has shown a wide variety of artists in his beloved Southampton space. “I [have] an ‘artists’ gallery,’ and the legacy of great artists out here is deep. The challenges of running a gallery here [include] holding fast to your own beliefs and views without being influenced by the simple desire of the money that surrounds us.” 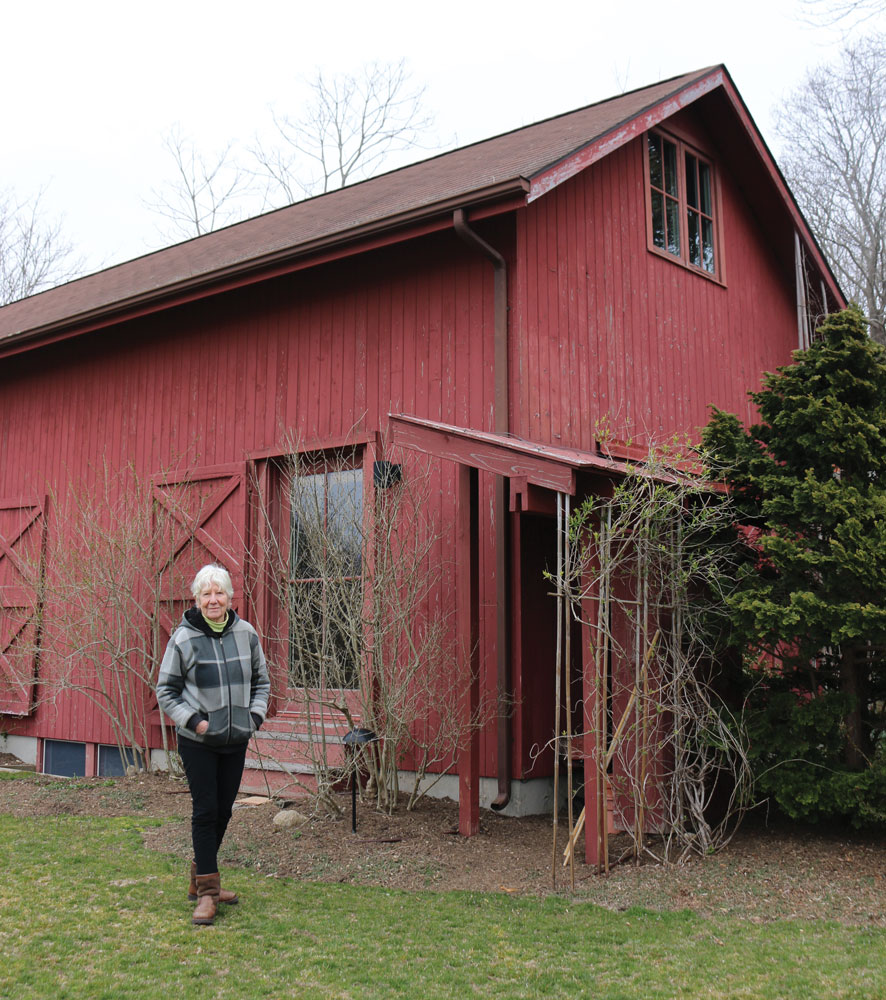 Though she maintains a studio in a SoHo loft, Mary Heilmann spends most of her time in Bridgehampton, where she has lived and worked for 23 years. “The art enterprise is so social and mainstream in culture now,” she said. “I chose it for the opposite reason, because you had to be eccentric and off the grid.” Her first visit, in 1969, was to see her friend Bruce Nauman, who was then working at Roy Lichtenstein’s studio. Now, she works in a studio in a big red barn behind her home, next to a plot of land on which she lets her neighbors plant vegetables. “It really is the country, and the ocean’s just down the road. I’ve got my farm, so I get to see things grow.” 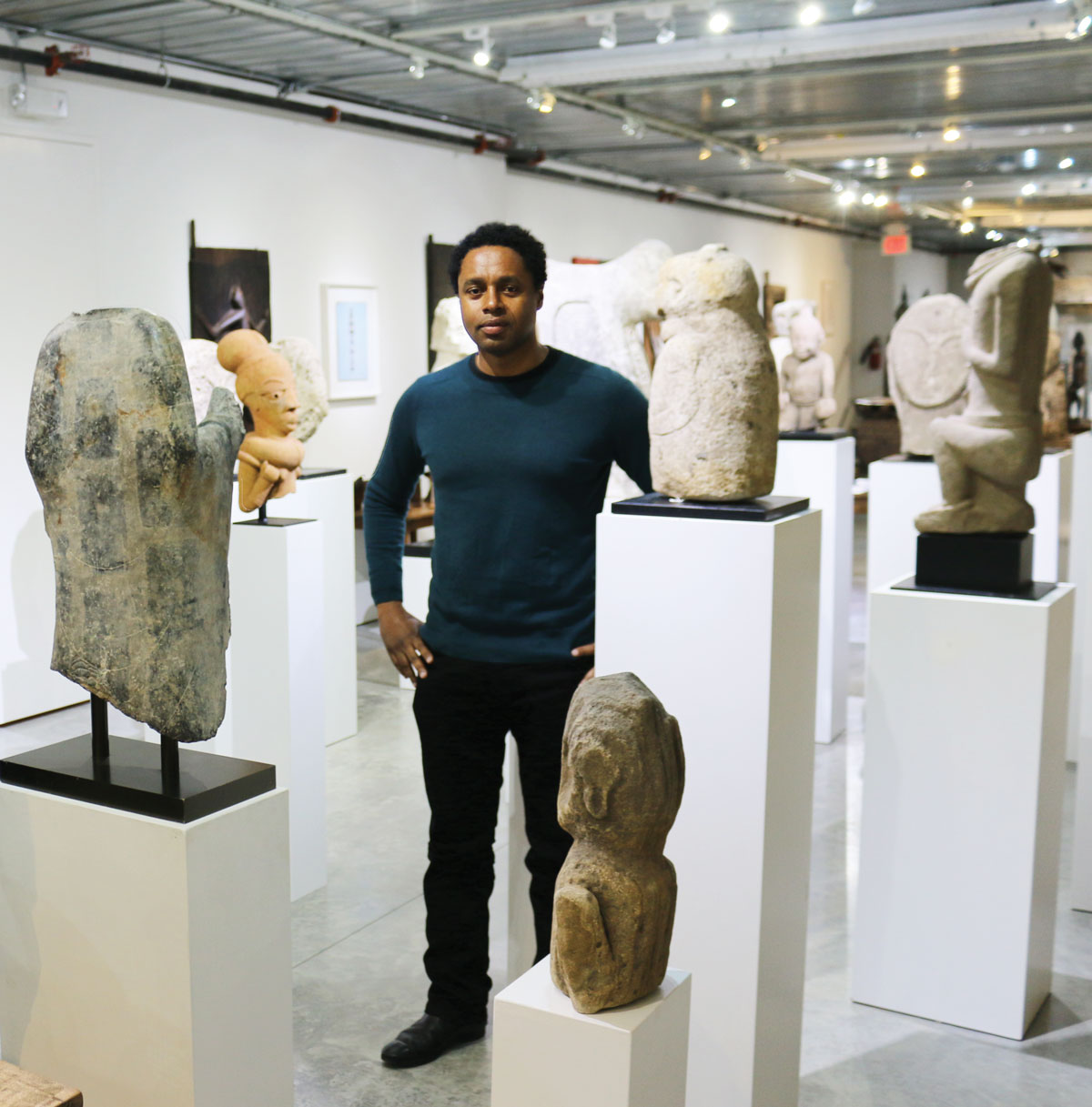 Claude Grunitzky was born in Togo, Africa, but has been based in New York City for the past two decades. On his first trip to the East End in 1999, he stayed with his friend and mentor, the artist Peter Beard. “I felt at home in Montauk, with its surfer vibe, artisan craftsmen, mom-and-pop shops, and unpretentious attitude. I was never really interested in the rest of the East End until years later.” In 2017 Grunitzky was named president of the Byrd Hoffman Water Mill Foundation, which oversees Robert Wilson’s interdisciplinary Watermill Center. He and Wilson found common cause in opposition to the lack of diversity in the area. “Watermill plays a crucial role in expanding the boundaries of creativity throughout the Hamptons. Diversity has always been key, and we’ve been seeing a lot of momentum around the educational iteration of our mission—where schoolchildren from different socioeconomic backgrounds interact with world-class artists in a welcoming setting. I like to think that our open-door policy means a lot in the Hamptons—it’s all about discovery and inspiration.” 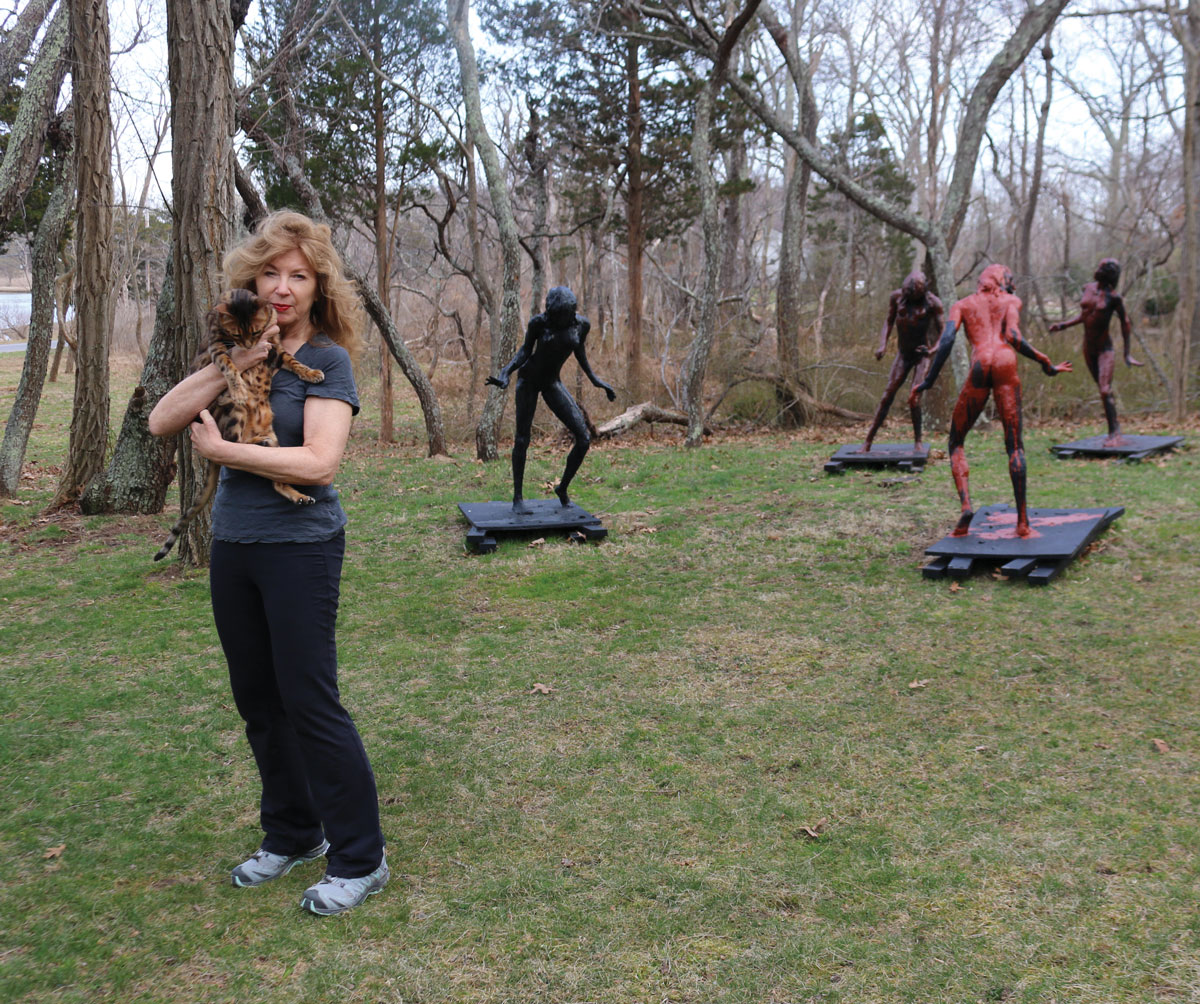 Painter April Gornik first encountered Sag Harbor in 1984, when she and her husband, artist Eric Fischl, visited a friend renting a property there. “I couldn’t believe how charming it felt, compared to the rest of the Hamptons,” she said. In 1998, the couple broke ground on a house they have lived in nearly full-time since 2004. Over the years, Gornik has observed a variety of changes. “It does feel like there’s more energy here, everything from artist dinners at local restaurants to good people in charge at Hamptons institutions,” including Guild Hall and the Parrish Art Museum. In 2015 Gornik helped spearhead fund-raising and rebuilding efforts for the beloved Sag Harbor Cinema, a local theater known for its foreign and arthouse programming, after it was destroyed by a fire. The goal is for the theater to reopen in early 2020. 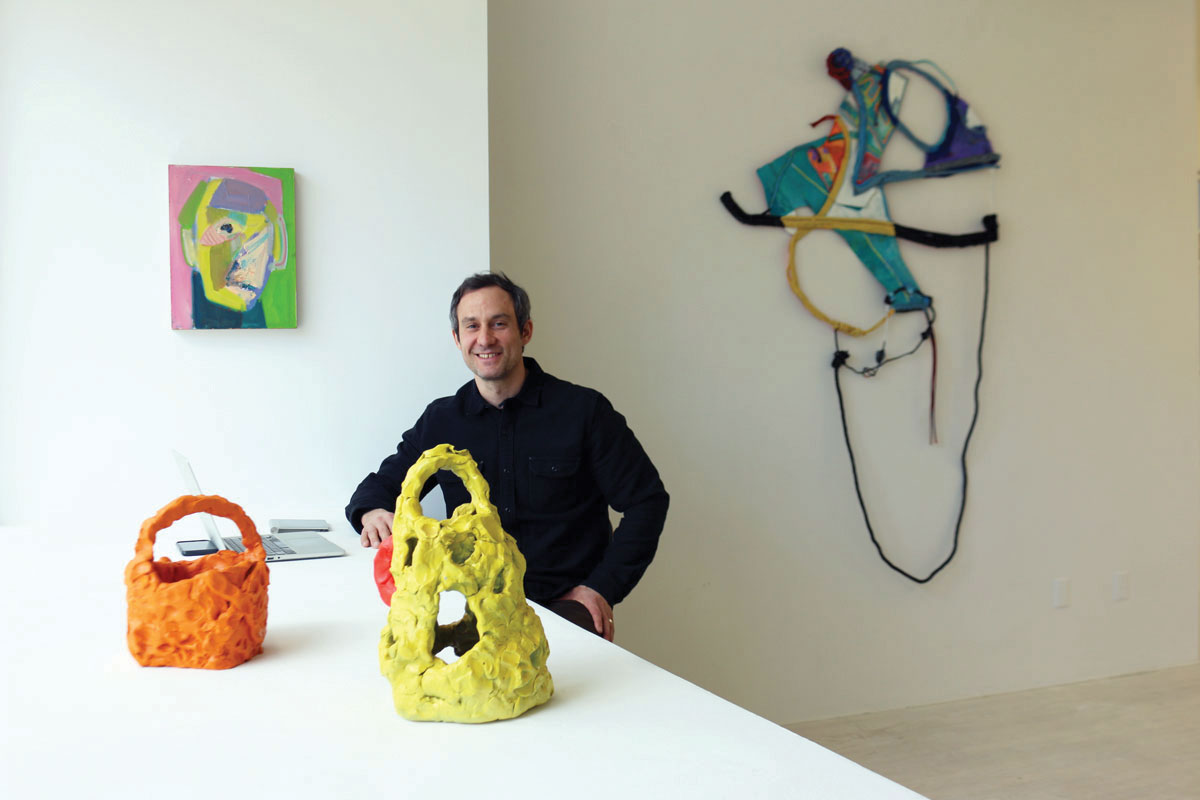 Of the East End art scene, Ryan Wallace, cofounder of Halsey McKay Gallery, said “it’s not as seasonal as people think.” Since 2011, Wallace splits his time between New York City and East Hampton, where he maintains his shop on the idyllic Newtown Lane, but folkways in the area can be forbidding for those new to the fold. “It’s hard to access if you don’t have an ‘in.’ Part of the reason [to open the gallery] was giving an opportunity to artists who might not have the chance to show.” Wallace’s first exhibition this summer is “Converter,” a group show featuring work by artists including Rosy Keyser, Sam Moyer, Graham Collins, and Elias Hansen—with an additional upstairs show, titled “Necromancer,” by Ryan Steadman. 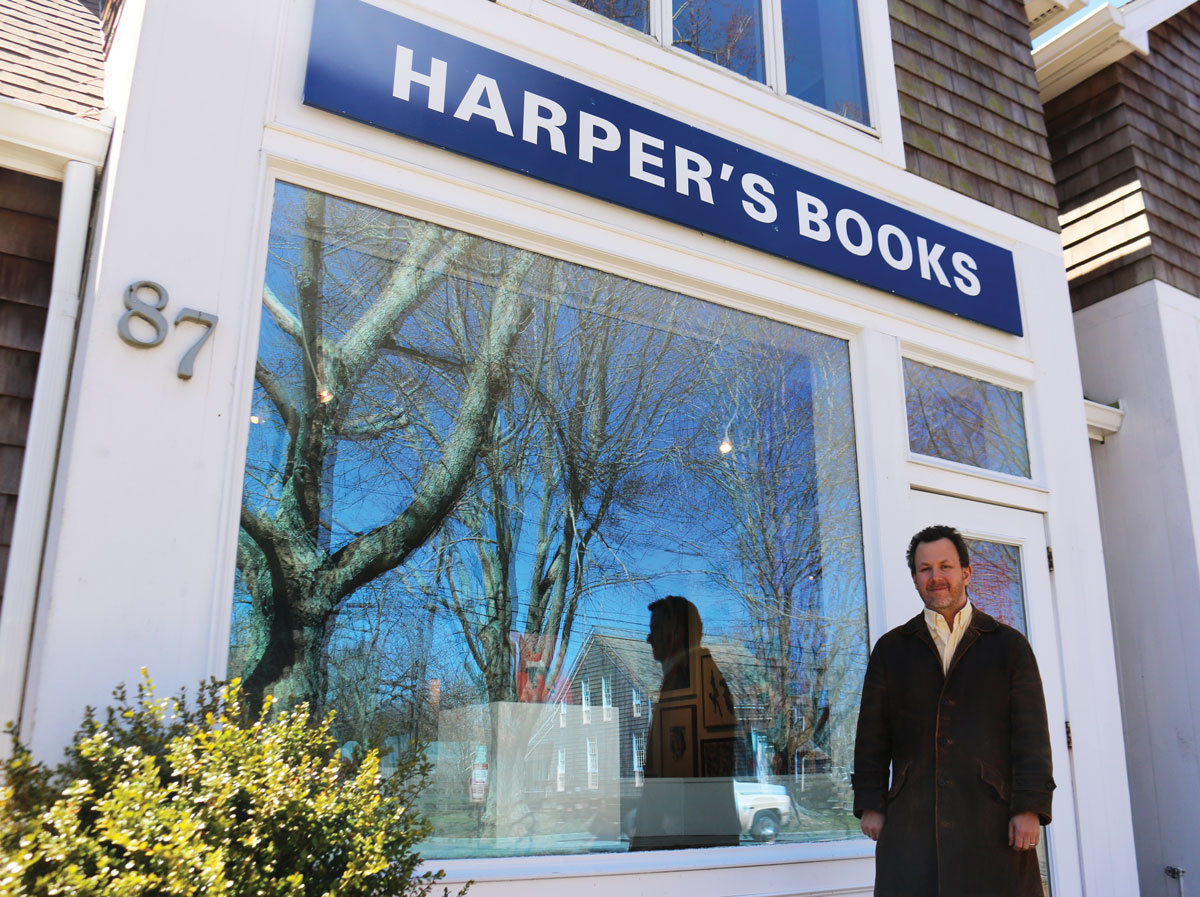 “Because there is so much money, you can come here chasing a dream and leave with your tail between your legs—or you can feel like you’ve found the rainbow at the end of the island.” So said Harper Levine, who has operated the vaunted Harper’s Books rare bookstore since 1997. It has been located in its current space in East Hampton since 2010. “There is an energy and dynamism that, 10 or 15 years ago, wasn’t here,” Levine said. “Without people from the city, there wouldn’t be a Hamptons art scene—but I think it stands alone. The Hamptons has always been a hotbed for artists. Artists have always loved to come here. By extension, it makes sense that there is a whole community built around artists.” In addition to his work in the book trade, Levine cofounded, with dealer Bill Powers, the Upstairs Art Fair, the second edition of which is set to open July 14 in Amagansett. 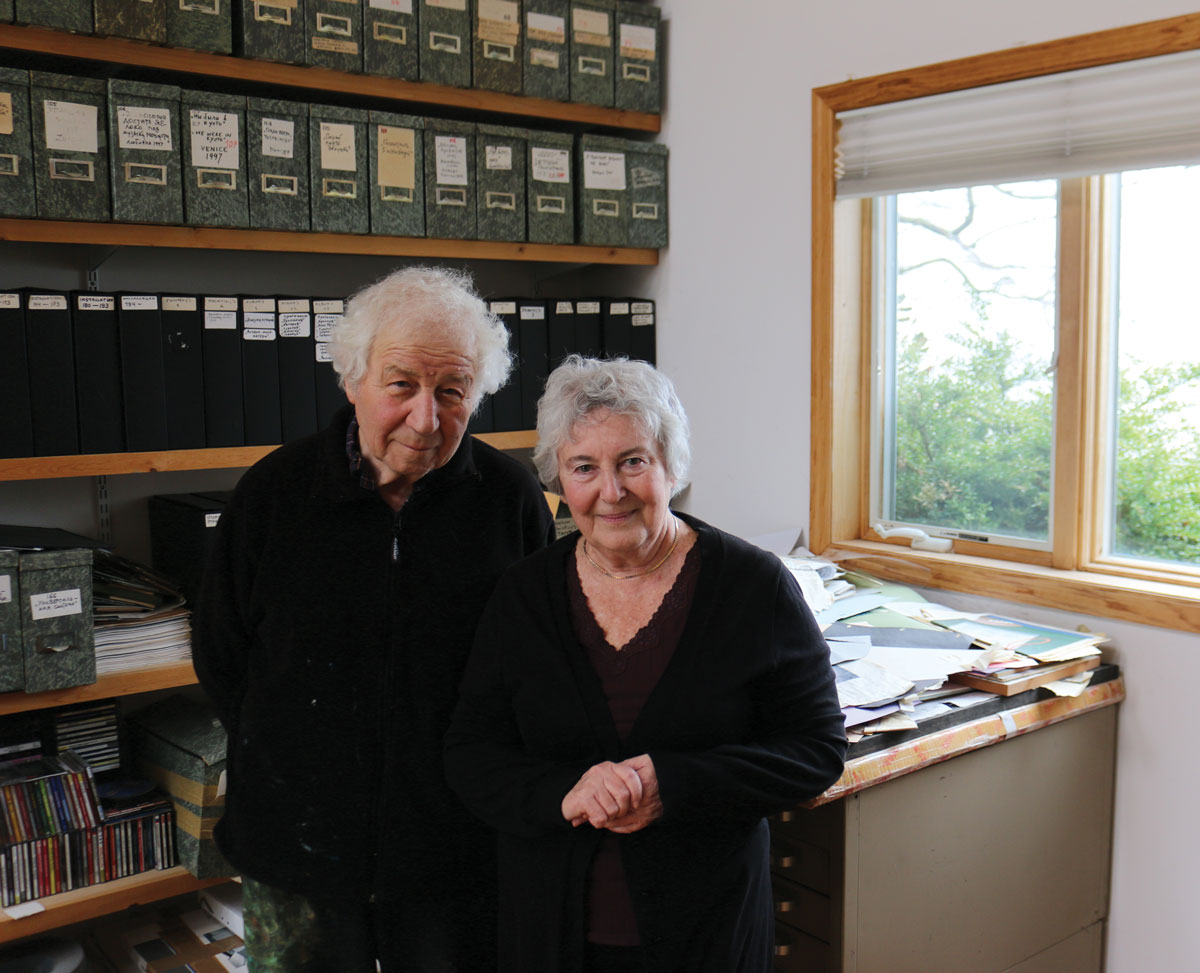 A long way from their homeland in Russia, the artists Ilya and Emilia Kabakov started making their way to Long Island’s North Fork in the late ’90s after visiting friends there. At the time, they were living in New York City but felt ready for a break after finding it hard to concentrate. They bought their house from an elderly Irish couple under the condition that it never be sold—and so it was that they ended up in a home built in 1917 and boasting a view of the Peconic River. “The best thing about Long Island is the people,” Emilia said, “and then the great light, the calmness of nature sometimes disrupted by storms, and the abundance of freshness: fresh air, fresh fish, fresh vegetables, and fresh fruits.” Asked if leaving the city behind ever hampered their career, Emilia replied, “the scene moves with us when we need to.” 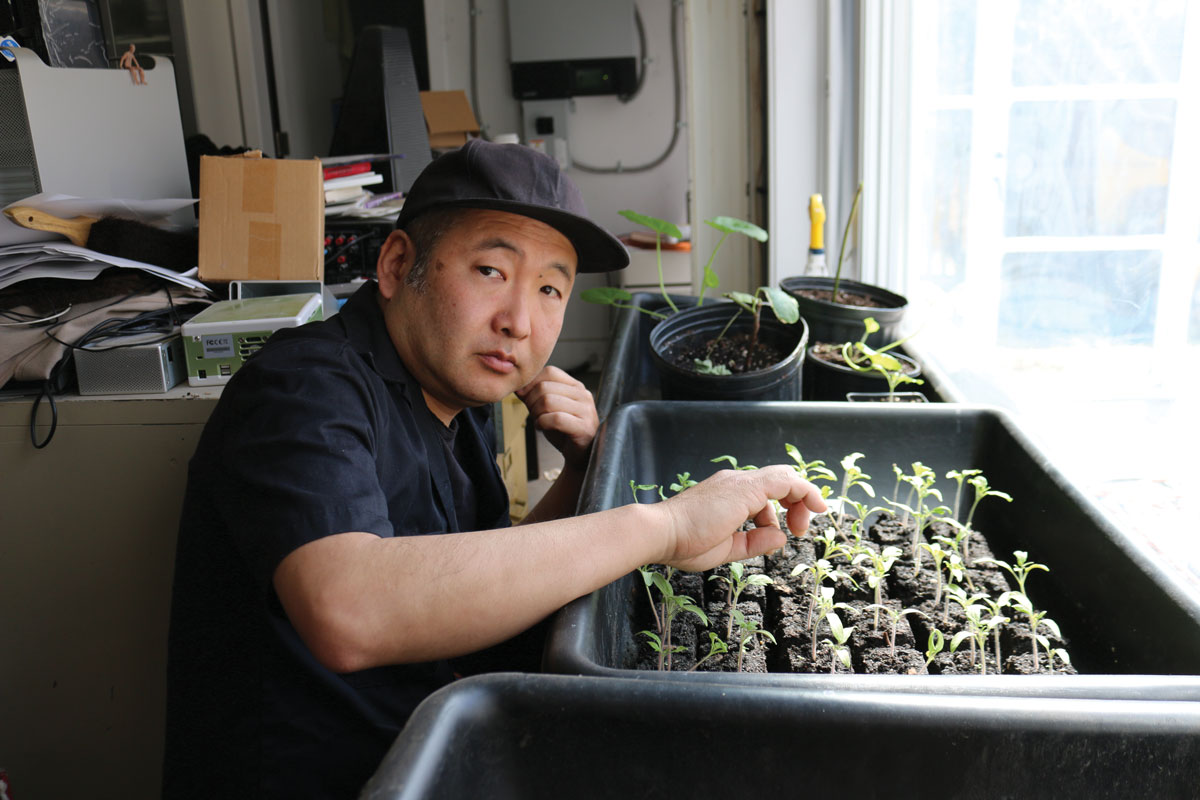 Hiroyuki Hamada, a recent Guggenheim Fellowship recipient (for having demonstrated “exceptional creative ability in the arts”), moved to East Hampton from New Jersey in 1998. Tucked away in the hamlet of Springs, he built a spacious studio on his property. “Everything’s very expensive, and it can be isolating,” he said. “The division between classes is more prominent here than in New York City, which always evokes a mixed feeling.” Despite the discrepancy, Hamada counts his ample space—which includes a greenhouse for gardening—and access to beautiful beaches among his favorite aspects of calling the East End home.

A version of this story originally appeared in the Summer 2018 issue of ARTnews on page 30 under the title “The East End.”