All artists have pet projects, but not all of them take on the project of a pet. Animals abound in the annals of art history, from Picasso’s beloved dachshund Lump to Frida Kahlo’s eagle named Gertrudis Caca Blanca (which translates colorfully to “Gertrude White Shit”). But what about esteemed artists’ pets today? To survey the special of sort of bond that can develop only between humans and creatures of other kinds,  ARTnews visited some notable pets around New York and asked their keepers about their habits. 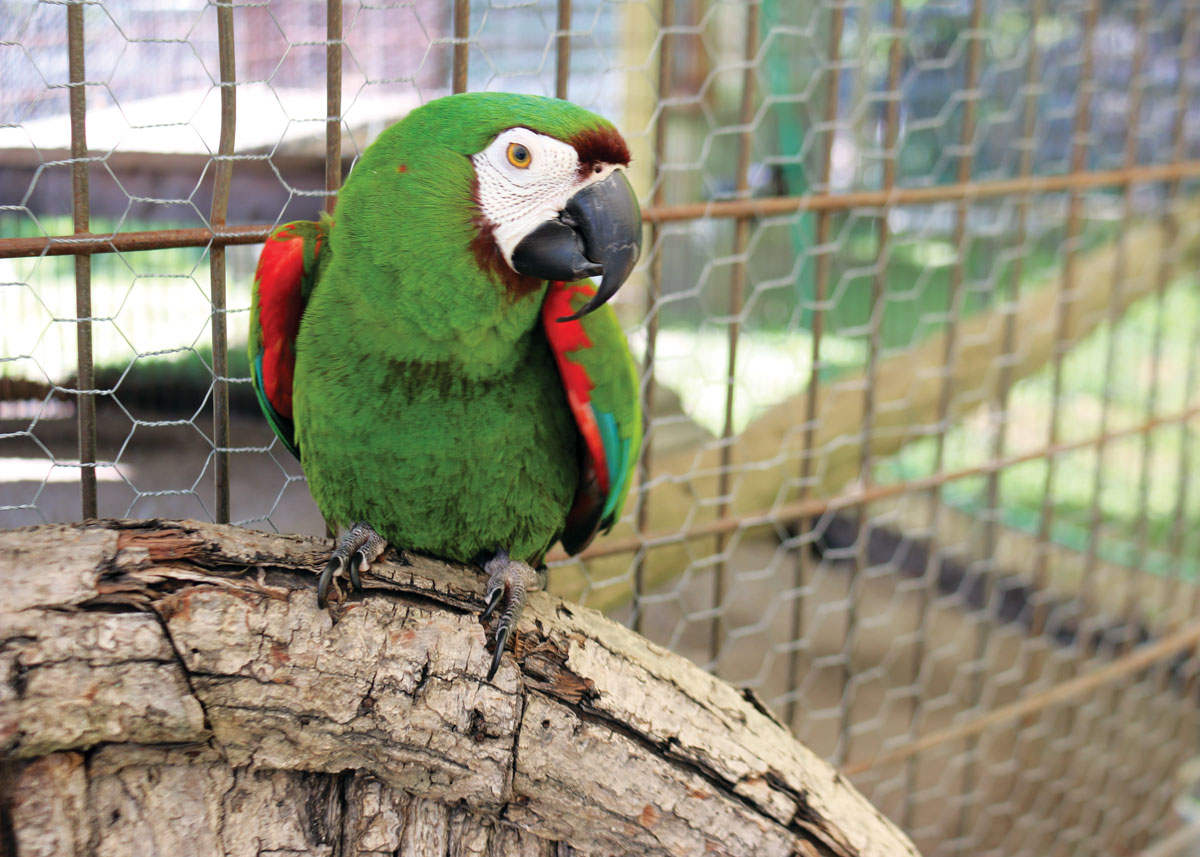 A severe macaw living with the photographer Cindy Sherman, Mister Frieda underwent a slight name change a decade after the artist acquired her winged compatriot in downtown New York. “The bird store in Tribeca told me they thought he was a girl, so I named her Frieda,” Sherman said. “You can’t tell unless you take blood, so later I had a vet do the test.” After the results came back, Frieda started answering to his name newly preceded by a signal-scrambling honorific. Sherman described Mister Frieda as playful, inquisitive, and very comfortable in the spotlight. “He’s affectionate and loves attention. He’s been the longest companion I’ve ever had, although it’s like having a perpetual 2-year-old.” 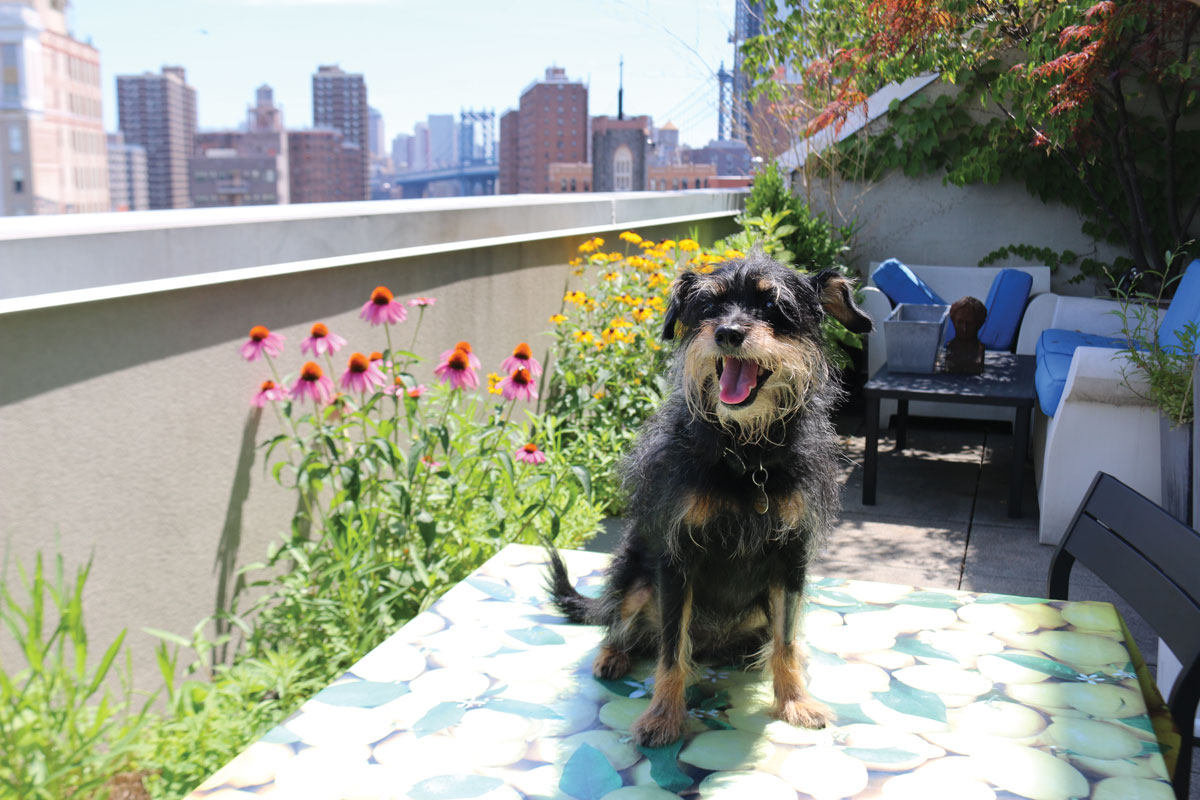 Filou, whose name in French translates to “rascal” or “scamp,” is the pet of artists Michael Stipe and Thomas Dozol. “I tried to name her Brezhnev because of her eyebrows,” Stipe said. But fate settled instead on a nickname coined for her by Patti Smith. A mini pinscher-poodle mix, Filou is “impish and very, very smart,” said Stipe. “She has a great demeanor and is calming but also demanding when she wants something.” Filou also comes from down South. “She came from Athens, Georgia, abandoned on the side of the street in a ditch,” Stipe said. “The first time she got into an elevator she was like, ‘What the fuck?!’ Now she’s an old pro.” 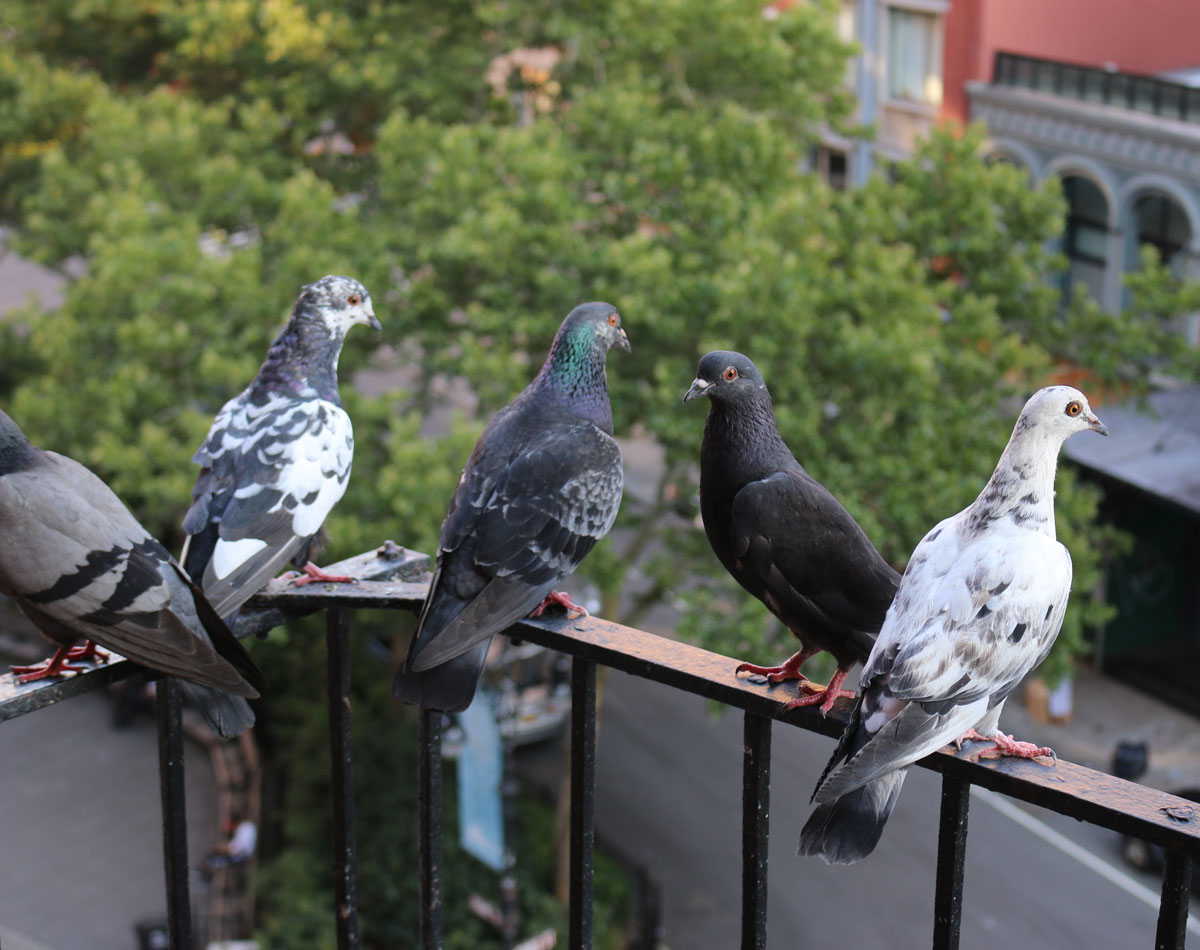 More than a few pigeons flock around the Tribeca loft of Laurie Spiegel, a computer-music maestro who worked at Bell Labs in the 1970s and has developed a sort of language with animals all around her. “They come and visit me,” she said of the birds—including one named Rusty—who swarm to her for daily feedings. “Pigeons have incredible social intelligence and form very strong lifelong bonds to each other and to individual humans, which makes them wonderful feathered friends and pets. We created them from wild rock doves the same way we bred dogs from wolves,” she continued, adding, “I think we have a real responsibility to take care of them. But mostly I do that because I love them and they make me happy.” 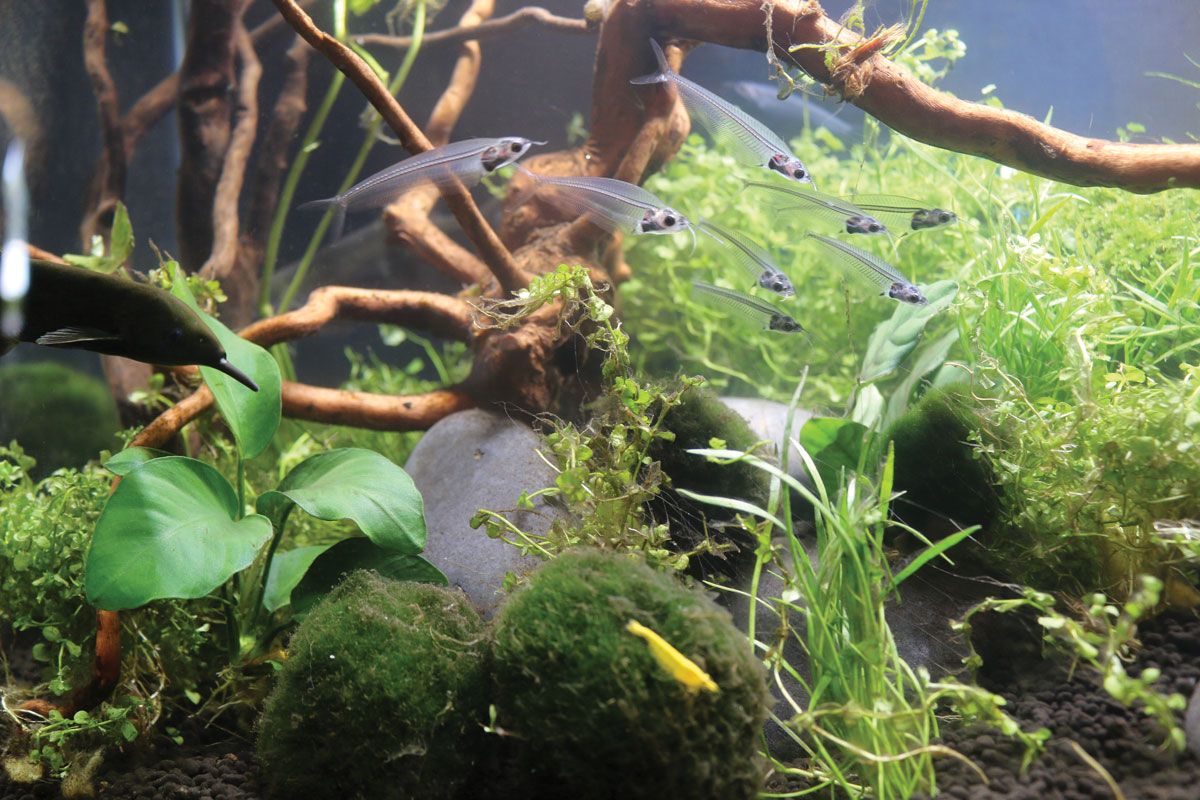 “Out of nowhere I just wanted an aquarium,” Jamian Juliano-Villani said of her aquatic wonderland in Brooklyn. “I got my first tank about five years ago and started with a crawfish named Michael. I used to breed hermit crabs when I was a kid, so I had some experience with crustaceans.” Her current collection includes two Peters’ elephantnose fish named Robbie and Samantha, ten glass catfish, a handful of cherry shrimp, and one unplanned addition to the family: “Somehow, when I got my plants, a tiny orange fish made its way into the tank. His name is Lucky for obvious reasons.” The best feature of aquatic pets? “They don’t talk back. And I like that I can play mini-God with things I don’t have to touch.” 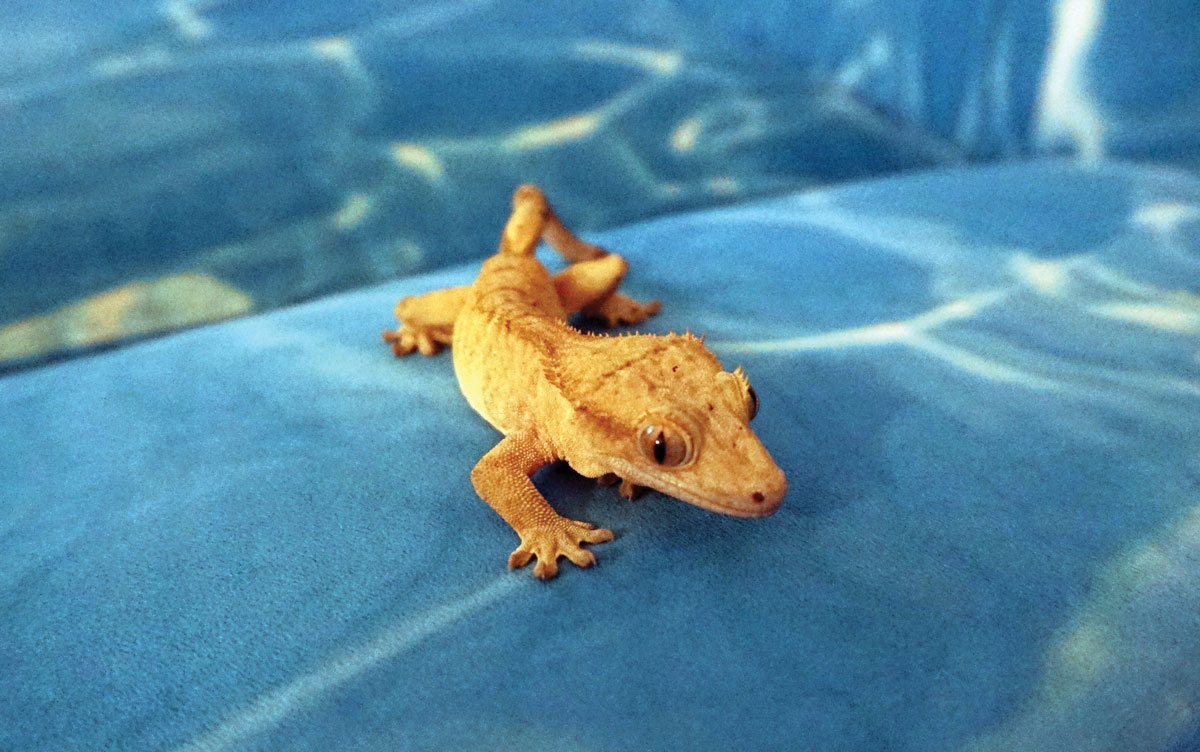 This eyelash crested gecko belonging to Cecilia Salama is almost two years old and has grown close to full size, thanks to daily cricket feedings. Salama got her lizard from a pet store on Bleecker Street in Greenwich Village one night after an art opening. “She was on sale for $35,” Salama said. “She was a tiny little thing and super scared. She had already been there over a month and no one wanted her!” Boy Rose is a “chill” companion for watching television, venturing on trips, and taking naps, the artist said. And every year she is treated to a gecko-geared party. “Last year we had caviar and champagne, and everyone brings a tropical fruit as a treat for her. We all sing ‘Happy Birthday’ and there’s usually some sort of dessert with candles for her to ‘blow out.’ ” 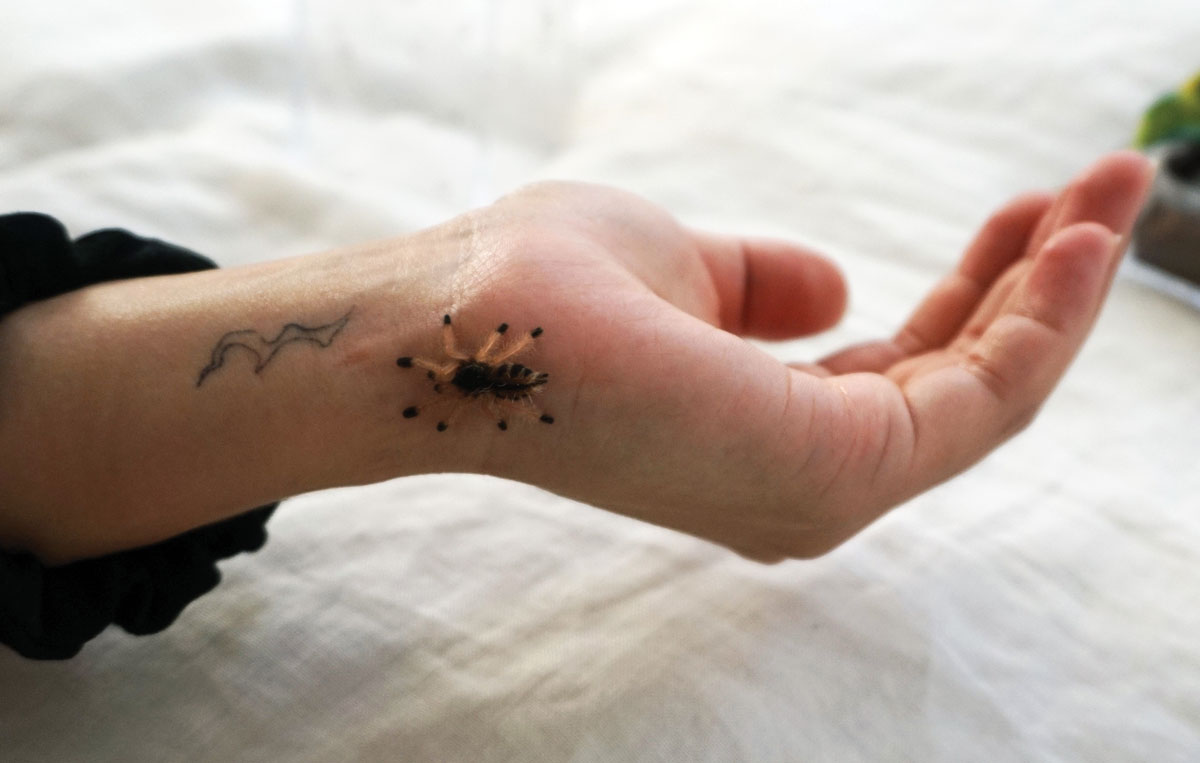 Goat is not Sydney Shen’s first tarantula. The taxidermied body of her last one, named Syd, even appeared as part of a reliquary in a recently exhibited artwork. Though Goat is small for now, the Goliath Pinktoe—the biggest tarantula in its genus, Avicularia—can reach a leg span of about 8 inches. “It is fascinating to observe animal behavior,” Shen said. “I love watching Goat build webs and hunt prey.” Asked about Goat’s moniker, Shen said, “I like when animals are named after other animals, like dogs named Tiger.” Plus, “there’s something diminutive and cute about the name Goat, yet it’s also the acronym for ‘Greatest of All Time.’ If I get another tarantula, I’ll probably name it Horsie and have a little barnyard.”