Most artists, unless they are selling a lot of work, need a good side job. For some, it’s just a way to pay the rent; for others, it’s a parallel passion. But whether they consider it a temporary solution or a career, a boon to their art or something entirely separate from it, the artists we interviewed below all seem to find satisfaction in what they do for money—maybe because they’re artists.

A slide show of the artists’ works appears at the end of the article. 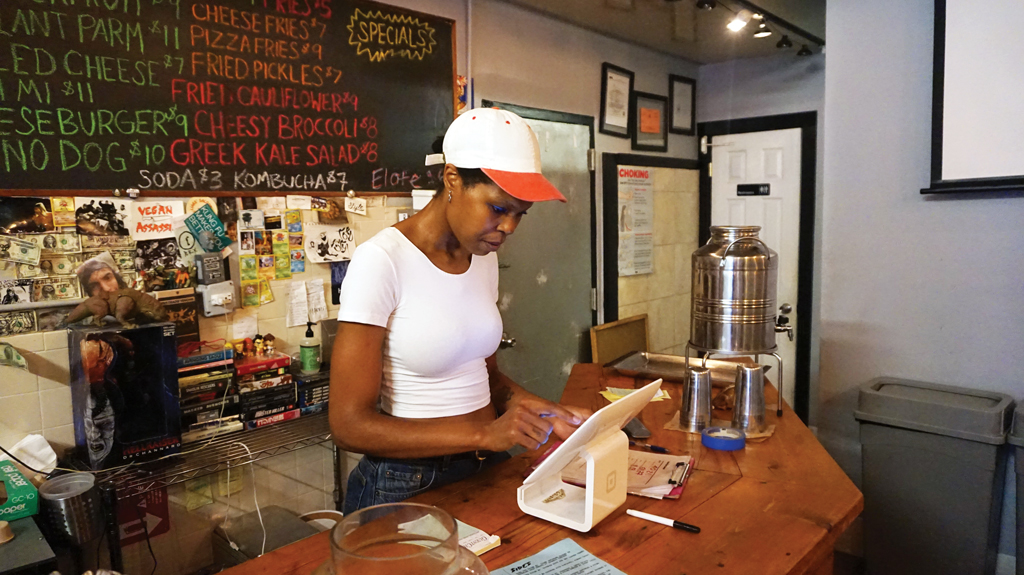 Diamond Stingily makes sculptural installations from found and ready-made objects (a recent show at New York gallery Ramiken Crucible featured documentary video footage, old doors, baseball bats, and Kanekalon hair). She used to work in a pet shop; she’s now a waitress at Toad Style, a vegan restaurant in the Bedford Stuyvesant neighborhood of Brooklyn. It helps that her managers, who are musicians, are supportive of her art career. “They really understand what I’m trying to do,” she says. For an emerging artist like Stingily, a reliable income and a flexible schedule are particularly important. But waitressing is not just a means to an end. “My job is a way of surviving, but that doesn’t mean I’m not informed or inspired by it,” she says. “I meet a lot of interesting people who also happen to be hungry.” 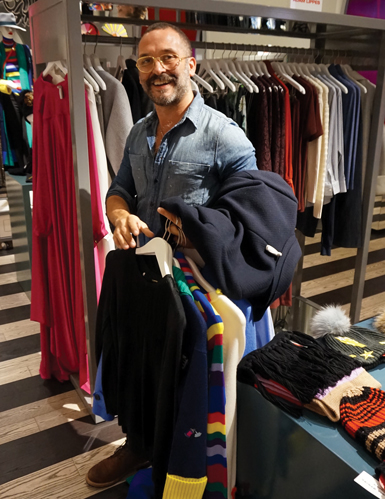 Everest Hall, whose work encompasses drawing, painting, and collage, is a stylist at the New York clothing boutique Kirna Zabete. He received his MFA from Yale in 1998 and, as he tells it, “I didn’t want to be a studio assistant, I didn’t want to teach, and I didn’t want to pack art.” He worked at a bank before moving into fashion. “There’s a misconception that fashion is a superficial business and stylists are only concerned with the artifice of it all, but we aren’t. I’m very interested in what’s happening with you, inside of you. It’s very intimate.” Most important, he can support his art. “When I was selling with galleries,” he recalls, “it was stressful. There’s a lot of pressure on the galleries, a lot of pressure on the artists.” This way, he says, “I can make work for myself. Which is the best way to do it.” 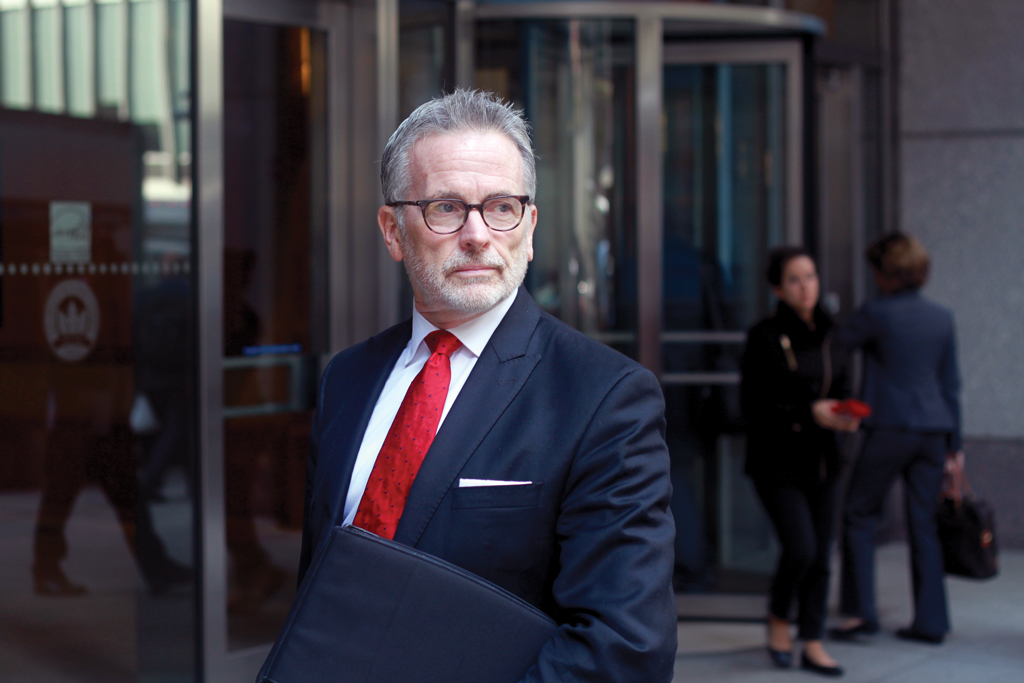 Michael Netter, whose paintings feature superimposed iconic faces (George Washington, Minnie Mouse), also has his own business as a management consultant. The majority of his clients probably don’t know that when Netter was in his 20s, he was a member of Andy Warhol’s inner circle, making more than 200 videos of Factory superstars like Candy Darling and Joe Dallesandro. While this early experience might appear unlikely preparation for a corporate career, Netter doesn’t see it that way. “What’s different about my two jobs,” he says, “is work style. Consulting is collaborative, highly structured, contextual, solution oriented. Painting is reflective, solitary, unstructured, enigmatic. Consulting is about answering questions, painting is about questioning answers. Same path; different directions.” Netter’s consulting work also allows him creative freedom. “Having a career as a consultant has allowed me to paint unencumbered by concerns about public acceptance and supporting my family,” he told me, adding, “I’ve never felt the need to choose one job over the other. Neither robs me of my ability or desire to do the other, so I just do both.” 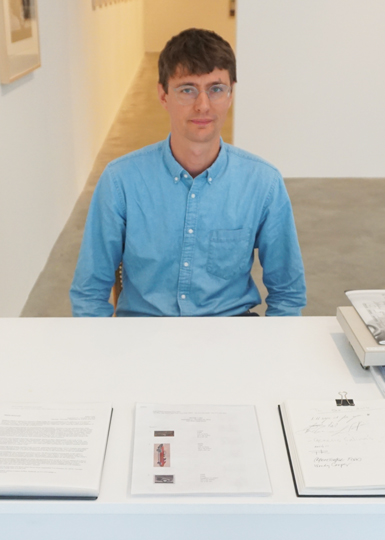 Painter Karen Heagle has had day jobs since she moved to New York in the late ’90s, including as a guard at the Metropolitan Museum of Art, and working for a short time in artist Robert Gober’s studio. It was Gober, in fact, who recommended Heagle for her current gig as a gallery attendant at Matthew Marks in 1999. Heagle, whose paintings are queer interpretations of historical artworks, has been the face of the gallery’s main space ever since. Next door, artist Richard Tinkler has been manning the front desk at the gallery’s second space since 2005.

“I never really planned on working at a gallery,” says Tinkler, who makes delicately colored paintings with quiltlike patterning, “but it turned out to be something that I really enjoy and something that I was suited to.” Adds Heagle, “I think that Matthew appreciates having two artists in place here, perhaps because we have a particular connection to the art-making process that we bring to every conversation, whether it’s with a member of the general public or a collector.” 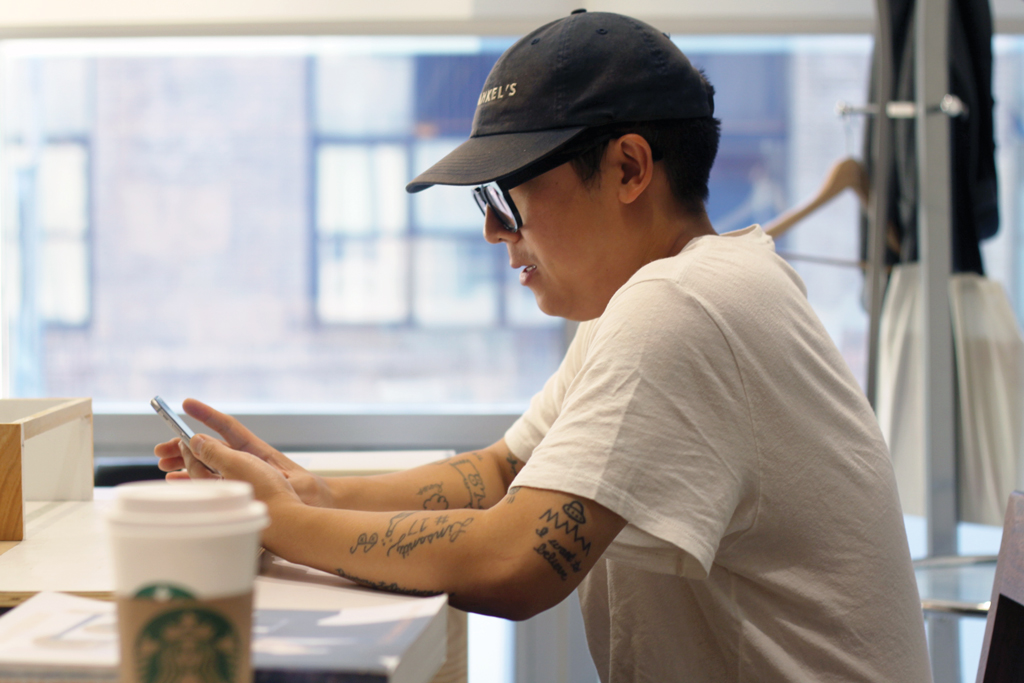 Andrew Kuo refers to his popular “EarlBoykins” Instagram account as a “pretend job.” As he tells it, “It’s something that accidentally became part of my routine—looking for photos and posting them throughout the day. It informs my practice by reminding me to lighten up.” Of late, Kuo has spent most of his time working on his hard-edge geometric paintings, but past side gigs have included making T-shirts for the luxury clothier Opening Ceremony, programming music for Kenzo stores, working as a DJ, and writing music reviews for the New York Times. 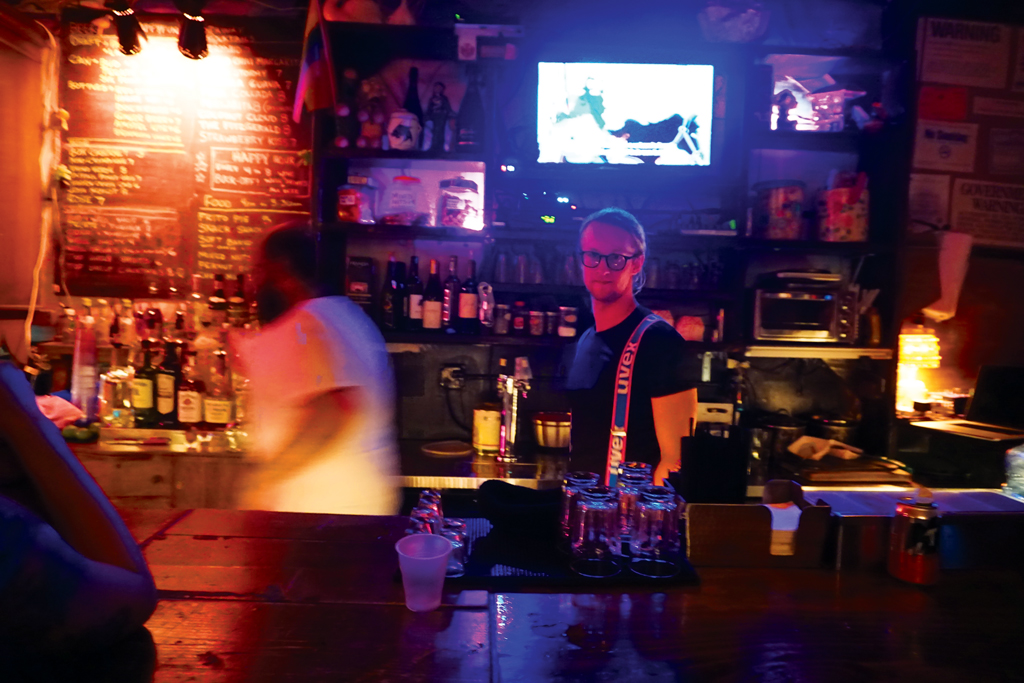 It’s not every day that you get carded by someone you recognize, let alone a rising star like multimedia and performance artist Colin Self, who splits his time between Berlin and New York, and is a bartender at the eccentrically decorated, gay-tilted bar Happyfun Hideaway in Bushwick. Self credits the bar’s two owners, Erik Zajaceskowski and Rachel Nelson—the team behind Flowers for All Occasions and the temporarily closed Secret Project Robot—with giving him a reason to keep returning to New York: the community they’ve built. “There’s a socioeconomic web that they’ve created to take care of artists,” Self says. “It’s a safety net that’s always there for me. I don’t have to worry so much about New York being such an expensive place.” 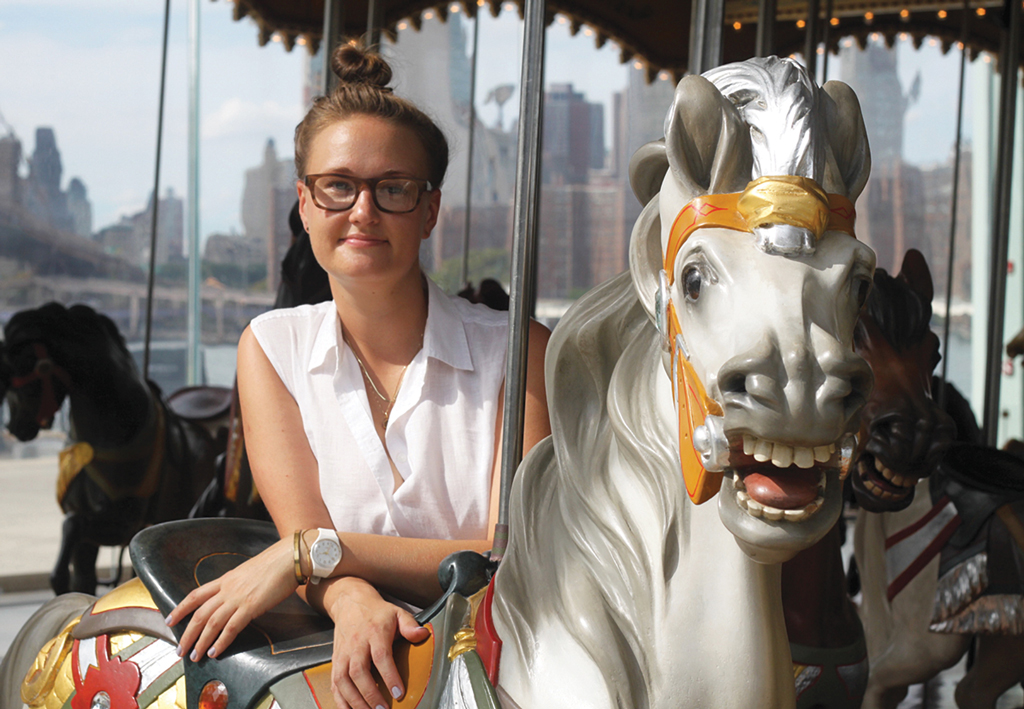 In addition to painting and making sculptures, Katie Bell has been a carousel operator at Jane’s Carousel in the DUMBO neighborhood of Brooklyn for the past five years. The owner of the carousel, Jane Walentas, is an artist herself and a supporter of the arts (she is executive director of the Sharpe-Walentas Studio Program, formerly the Maria Walsh Sharpe Art Foundation Space Program, which provides working studio space to artists). “Jane knows I’m an artist,” Bell says, “and she wants to support that.” For her part, Bell has respect for the carousel as a work of art, considering herself the protector of a giant, spinning sculpture. Working at the carousel can be extremely repetitive, but also very meditative. “The same thing happens every five minutes,” Bell told me. “In New York, everything is in flux. But here, things are constant.” Nevertheless, she added, “the experience you’re providing is really complex.” 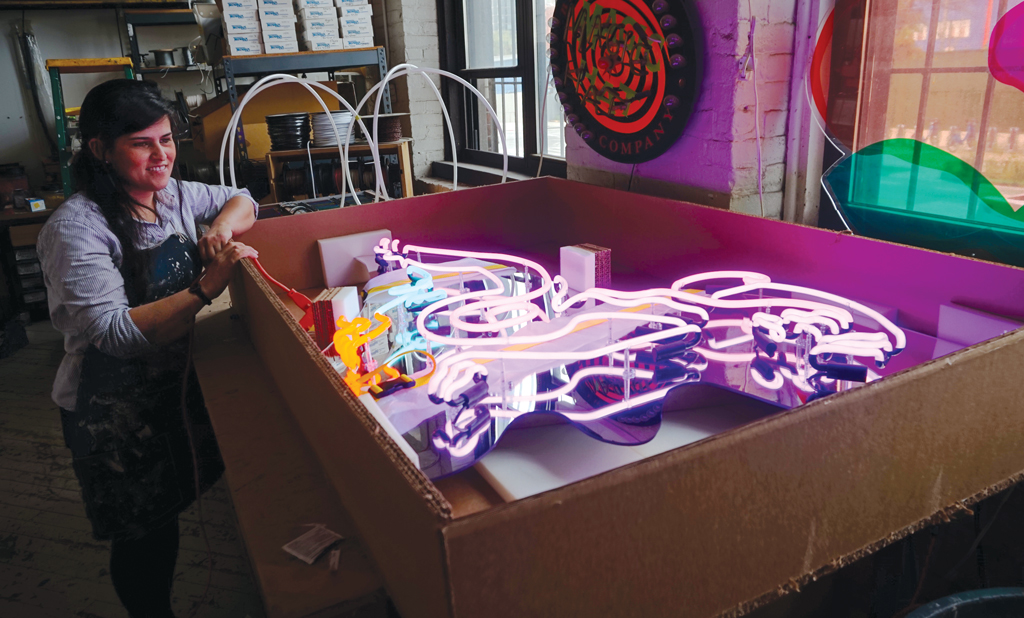 Esther Ruiz has been working as a technician at Lite Brite Neon Studio in Brooklyn since she answered a Craigslist ad five years ago. Her work at the company has a direct connection to her art; Ruiz’s freestanding sculptures regularly incorporate neon, and the skills she’s acquired at Lite Brite allow her to push the material’s limits when fabricating her own works.

“I have a very intimate relationship with neon,” she says, “I understand it in a way many artists don’t, so I’m able to use it in a more unique way.” For Ruiz, her day job is a daily inspiration. “Working closely with a somewhat elusive science, and a dated, yet futuristic technology, dovetails with my longtime love of science fiction,” she told me, “There are times when I use Ohm’s Law and long division and discuss electromagnetic fields in the course of one project.” 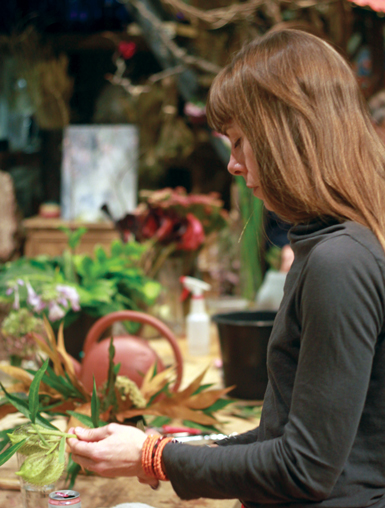 Joy Curtis has worked as a florist at Fleurs Bella in New York for ten years. The owner of the shop, Bella Meyer, also happens to be Marc Chagall’s granddaughter; she originally hired Curtis to help her with her archives. Over time, Curtis got more involved with the floral arrangements. “I make primarily sculpture, so it was a good fit in a way,” she says, adding, “I’m very lucky because Bella understands what being an artist entails.”


Below, a look at work by the artists.

COURTESY THE ARTIST AND MARLBOROUGH CHELSEA

A version of this story originally appeared in the Winter 2017 issue of ARTnews on page 38 under the title “Habitat Moonlighting.”

Everything You Need to Know About Collecting Vintage Jewelry in 2022