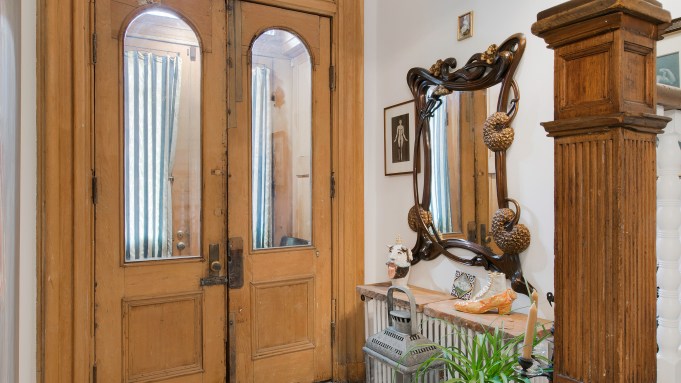 A five-story town house in New York’s Greenwich Village neighborhood that was decorated by painter and filmmaker Julian Schnabel has hit the market for the first time in 30 years—with a price tag of $18.5 million. Roughly 6,600 square feet, the Italianate town house at 132 West 11th Street has been in the Schnabel family since the 1990s. Though the artist and his first wife, art collector Jacqueline Schnabel, did not reside there—they lived a few blocks away—the interior bears their work. A cavernous dining room is outfitted with baby-pink patent leather chairs, and a white carpet is offset with green and fuchsia paint. A bull’s bleached skull emerges from the hearth of a fireplace in the home office.

A Look at the Art in Julian Schnabel's Former $10 M. Gramercy Park Loft

“When you are there, you feel as if you are traveling on a boat down the Nile,” Lola Montes Schnabel, Julian’s daughter, said in a statement to the Wall Street Journal. “Natural light floods the house from every direction, as if bouncing off water.”

According to the listing agent, Michael Bolla of Sotheby’s International Realty, the house includes four bedrooms, four terraces, a light-filled art studio, library, and a 1,000-square-foot basement. Past visitors to the town house described an environment that embraced spontaneity. According to a 1994 profile in T Magazine, a George Condo painting was once perched in the fireplace (“I put things where I can enjoy them, that’s all,” Jacqueline told the interviewer).

Although divorced, the duo worked together during the renovation. Julian laid the kitchen floor and made furniture, including the kitchen table and Jacqueline’s rolled steel bed. They instructed the architects, David Piscuskas and Juergen Riehm of 1100 Architect, to restore the house to its 19th-century spaciousness. The architects, in turn, tore off the house’s rear and added a glass-bottomed terrace on the third floor.

Unfortunately for the new owners, the residence won’t come with Schnabel’s art collection, which includes works by Cy Twombly, Andy Warhol, Francesco Clemente, and Francis Picabia (among many Schnabels, of course).

Take a tour of the house in the slideshow above.

Intermix Said to Have a Buyer: Regent L.P.