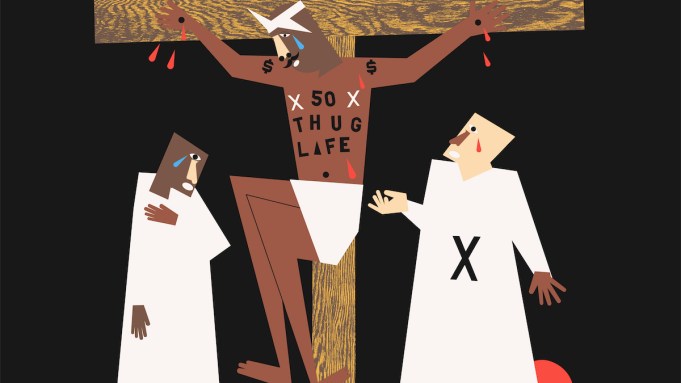 It’s easy to rattle off the artists who’ve designed album covers that have gone down in history. During the ’60s, there was the covers of Rolling Stones’s Sticky Fingers and the Velvet Underground and Nico’s eponymous 1967 album, both by Andy Warhol. There were also three covers for the Beatles, all by the Pop artist Peter Blake. The tradition has continued on since then, and has in recent years included covers by Takashi Murakami and George Condo for Kanye West, one by Damien Hirst for Drake that went viral this past fall, and one by Jeff Koons for Lady Gaga, whose 2013 album ARTPOP features the singer in the style of his “Gazing Ball” sculptures.

But if it’s harder to recall those more recent ones than it is the Warhol covers, that’s partly down to the ways in which many of us consume music nowadays, with the physical album fading amid the rise of digital streaming services like Apple Music, Amazon Music, and Spotify. Lately, however, vinyl has been making a comeback, and with that, perhaps, may come a wave of artist-designed album covers. In the largest artist/album cover project to date, Interscope records is celebrating its 30th anniversary by enlisting 47 celebrated contemporary artists to make covers for the albums in Interscope’s catalogue. The albums have been reissued in editions of 100; they are priced at $2,500 apiece, and proceeds from their sales will go to Iovine’s charity, the Iovine & Young Academy at the University of Southern California

The album project is something of a return to form for Interscope founder Iovine, who worked on it with his handpicked successor at Interscope CEO John Janick, and it merges their two passions, music and art. Iovine, who has said he got the 30th anniversary project idea from Justin Lubliner of Darkroom Records, has become known for straddling the analog and digital music worlds: from the 1970s to the early 2000s, Iovine was responsible for numerous iconic albums, then, in 2014, he left Interscope for Apple and, with his business partner Dr. Dre, was partly responsible for the development of Apple Music. In 2019, in an interview with the New York Times, he expressed skepticism about streaming as a model. Since he retired from Apple in 2018, Iovine has become an art collector of note, donating a large Mark Bradford painting to the Los Angeles County Museum of Art in 2018, and commissioning Ed Ruscha in 2017 to create the painting Our Flag, which was subsequently shown at the Brooklyn Museum. He has also appeared on ARTnews’s Top 200 Collectors list. In that 2019 Times interview, he compared today’s music unfavorably to today’s art, saying of his Ruscha Flag: “This painting says more than any song that I’ve heard in the last 10 years. Why is that?”

An exhibition of the original artworks for the albums at the Los Angeles County Museum of Art opens to the public next week. And while LA Times art critic Christopher Knight has raised legitimate questions about the ethics of museums presenting such projects, the scale of the project itself, and the caliber of the artists involved, could have a wide-ranging influence on the nexus of visual art and music.

“What Interscope does is try to get out in front of something that is going to happen,” Iovine said in an interview. “I think this project is going to inspire a lot of [musical] artists to refocus on their album artwork. It used to be a competition, where the artwork was as important as the album. What Interscope has done here is brought in something that is sort of bubbling out there, but now they’ve galvanized into this one giant piece of work. And it’s also something that will probably be impossible to duplicate.”

To match artists with musicians, Iovine and Janick brought on a fellow producer and art collector, Josh Abraham, founder of the music publishing company Pulse. (To promote the project, Interscope brought in yet another producer and art collector, Swizz Beatz, who also appears on ARTnews’s Top 200, and who made a short video for the Interscope project.) Abraham has been collecting art since the early 2000s, when he was an independent producer, his first purchase a Yoshitomo Nara from 2001. “Josh is a rare bird where he is into art and is talented in music, a real hybrid guy,” Iovine said.

“This marriage of music and this art is really taking place” right now, Abraham said. “Look at Jay-Z and Puffy— these guys are real collectors.” A few years ago, Puffy bought at auction a Kerry James Marshall painting for a record $21 million.

The Interscope project worked in different ways for the various artists involved. Each artist designed the cover for one album, with the exception of Damien Hirst, who did covers for all 12 Eminem albums as well as three of his signature pill cabinets to house them.

Some artists met with their musical counterparts to discuss the project. Kehinde Wiley made a portrait of Dr. Dre outfitted in armor; the two met and spoke extensively. Less extensive than those exchanges, but still significant, were those between Jenna Gribbon and Lana Del Rey. Gribbon requested Born to Die, and discovered that Del Rey was a fan of her work. “We talked about ideas, and the painting happened really organically,” Gribbon said. The piece is connected to a series Gribbon showed in London a year ago where she paired her own work with work from the estate of French filmmaker Agnès Varda. “It was all about my relationship to Varda’s work, and watching my friends encounter her work—showing my friends her work and watching them watch it.” She took the same approach with Del Rey’s image, depicting her partner, the musician Mackenzie Scott (known as Torres) gazing at a projected image of Del Rey. “We had a long conversation after she saw it,” Gribbon added of Del Rey. “She wanted to tell me how much she loved it. The painting is also a gay fantasy, which I like. It’s really fun for me and also great for the gay community to have a Lana Del Rey record for themselves.”

Other artists also mixed in inspiration from their recent series. When he took on Lady Gaga’s 2016 album Joanne, Nicolas Party was working on an exhibition in Germany where he was making portraits of the actress Marlene Dietrich. He saw similarities between the two women, he said, and in the cover, he outfitted an image of Lady Gaga in a suit Dietrich wore in a famous photograph. The bird Gaga holds he appropriated from a pastel by Rosalba Carriera. During the Rococo period in the 18th century, the Italian-born Carriera started a trend toward pastel portraiture. Perhaps because it was popular with women, who weren’t permitted to have proper studios and work with oil paint. pastels are still often associated with hobbyists, Party pointed out. With his own work, he said, “I’ve been trying to have people get into it again.”

At least one artist—Chloe Wise, who did the cover for the Yeah Yeah Yeahs’s It’s Blitz!—had in mind the album’s original cover, making reference to its image of lead singer, Karen O, crushing an egg. Brian Donnelly, the artist known as KAWS, was dead set on doing the cover for Snoop Dogg’s 1993 Doggy Style. When he looked back at the original cover, he said, he realized he didn’t want to compete with it. Like Party, he went with a continuation of his present work. “The songs on the album are cinematic,” Donnelly said. “And the last show that I was working on, it just sort of chimes with that body of work.”

For many of the visual artists, nostalgia also played a role. Julie Curtiss said of No Doubt’s Tragic Kingdom, “I grew up with this album. It’s my generation. There was a nostalgia factor. These songs were on the radio, and playing in my head, during my teenage years.” Thinking about the song “Just a Girl,” Curtiss painted an idiosyncratic image of Botticelli’s Venus, made entirely of hair and situated inside a fishbowl. Curtiss said the music on the album and her own art have similarities. “There’s ska, reggae, rock grunge. I related to that because my work is like that. I like to borrow, and use different inspirations.”

In other instances, there was a pre-existing relationship between the visual artist and musical artist. When Juice WRLD died from an accidental overdose in 2019 at the age of 21, he and Takashi Murakami were speaking about potential collaborations. On his cover for Juice WRLD’s Goodbye and Good Riddance, Murakami shows himself having a FaceTime conversation with the musician.

In some cases, Interscope and Abraham sought out artists on the basis of imagery the musicians had already used. In MGK’s video for his song “Forget Me Too,” the camera appears to travel inside his eye, which made Iovine and the others think of British artist Marc Quinn’s giant paintings of the irises of human eyes. (As he spoke by Zoom, Iovine had one behind his desk, featuring the eye of his wife Liberty Ross.) Sometimes Abraham’s approach switched to something else entirely: he was talking with dealer Francois Ghebaly about having artist Sayre Gomez work on a Nine Inch Nails cover, but Gomez, who has become known for sticker pieces where each one says “99 Cents,” had the idea of using that motif but replacing it with 50 cent, for the rapper’s Get Rich or Die Tryin. (Historically, art dealers have been responsible for some of the greatest artist/album cover matchups, among them the one that Richard Hamilton designed for the White Album, which was orchestrated by London gallerist Robert Fraser, a regular visitor to the Abbey Road studios.)

Other resonances between artist and musician include the one between artists Lauren Halsey and Reggie Burrows Hodges and rapper Kendrick Lamar—all three grew up in Compton. Halsey made a painting for To Pimp A Butterfly. Burrows Hodges had done a painting called “Swimming in Compton”; he made a new one for Good kid, m.A.A.d city, which includes the song “Swimming Pools.” (Henry Taylor also did a work for a Lamar album, DAMN (DNA), describing one of the rapper’s concerts as “off the mf…” in a text message.)

In a handful of instances—Loie Hollowell for Lady Gaga’s Fame Monster, Raymond Pettibon for Lana Del Rey’s Norman Fucking Rockwell, John Currin for U2’s Beautiful Day—the artists provided existing artworks, a practice that has a significant precedent in Sonic Youth’s iconic cover for the 1988 album Daydream Nation, which has a song called “Candle” and, on its cover, Gerhard Richter’s photorealist painting Candle (1983). New Order went considerably further back in time when they reproduced Henri Fantin-Latour’s 1890 painting A Basket of Roses on the cover of their 1983 album Power, Corruption & Lies.

Interscope also included a work from a deceased artist, Matthew Wong, who committed suicide in 2019. Brendan Duggan, a dealer at New York’s Karma gallery who represented Wong during his lifetime, had texts from the artist talking about Del Rey’s music.

The Interscope project, conceived in Spring, 2021, came together in just over a year. “What everybody did was herculean,” Iovine said. At the end of the day, Iovine, the art lover, is adamant that the original artworks the artists produced, the ones being shown at LACMA, are as important—if not more important—to him than the album covers. “We didn’t do this to make albums you can sell,” he said. “We made the art and because we had to come up with something, we came up with, Hey, let’s make limited edition albums and sell them for charity.”