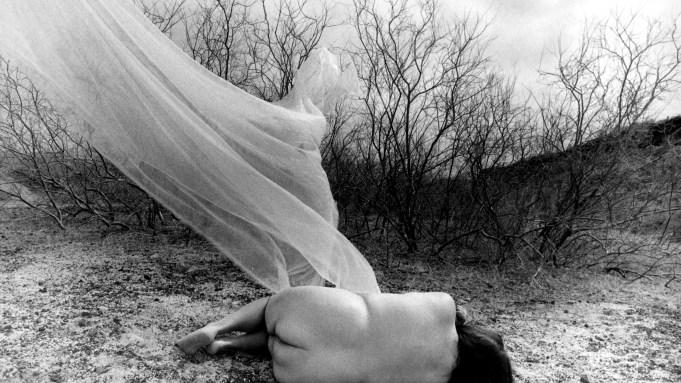 In the three years since her widely lauded traveling career retrospective first opened, museums across the country, realizing that they had long overlooked one of contemporary art’s most significant photographers, have been clamoring to acquire prints by pioneering Chicana artist Laura Aguilar, who died in 2018. Almost exactly a year ago, the J. Paul Getty Museum in Los Angeles announced it had purchased 35 prints by the artist, and a few months later, as part of its annual report of new acquisitions, the Whitney Museum in New York announced that it had purchased four works by Aguilar as well.

Now, in an acquisition that has been in the works since around the time of Aguilar’s 2017 retrospective, the Los Angeles County Museum of Art and the Vincent Price Art Museum in nearby Monterey Park, which organized the show, have announced that they have jointly purchased 21 prints by Aguilar. The acquisition was engineered by Rita Gonzalez, curator and head of contemporary art at LACMA, and Pilar Tompkins Rivas, VPAM’s former director, who recently joined the Lucas Museum of Narrative Art as chief curator.

Aguilar’s most iconic works remain her images featuring her nude body in arid settings, but her photographs of the community at a lesbian bar and herself in poses that mock the art world have risen to the fore as well because of the VPAM show. “I think her retrospective gave people a real sense of the range of her work,” Gonzalez told ARTnews. “If people knew her work, it was really through the nude landscape photographs.”

She added, “We have a substantial representation of the breadth of her work now.”

Among the images entering the museums’ collections is Aguilar’s famed Three Eagles Flying (1990), for which the artist depicts herself bound by a noose and flanked by two flags, one for the U.S., the other for Mexico. Gonzalez described it as “an intense image [that] speaks so much about Chicanoism, about her place in-between, betwixt these identities and being potentially stifled by these national identities as well.” Also entering the museums’ collections are the four-part work Don’t Tell Her Art Can’t Hurt (1993), three works each from the “Plush Pony” series (taken in 1992) and her later color “Grounded” series, and two works each from “Clothed/Unclothed,” “Nature Self-Portrait,” and “Stillness.”

The Aguilar acquisition will significantly augment LACMA’s holdings, which already include works by Aguilar (acquired in the 1990s and early 2000s), but have largely been lacking when it comes to the most famous parts of her oeuvre. The museums’ acquisition is also accompanied by the joint purchase of a 2019 four-panel adobe painting, titled …we are the mountain, by L.A.-based Chicanx artist rafa esparza, which was shown at the artist’s 2019–20 solo show at MASS MoCA in North Adams, Massachusetts.

Gonzalez said that she hopes these kinds of acquisitions between LACMA and VPAM will continue, extending the two institution’s long-running partnerships that has seen, among other programs, selections from LACMA’s permanent collection travel to VPAM in an effort to reach the city’s Eastside communities. This news is also significant to the history of East Los Angeles College, where VPAM is located, as both Aguilar and esparza studied there.

According to Gonzalez, LACMA doesn’t have an endowment for the acquisitions of new works—all works that enter the collection have to be donated, or curators must raise funds for them to be purchased.

That has left the museum’s holdings severely lacking in contemporary Latinx art—a gap Gonzalez is seeking to fill.

“For the years I’ve been at LACMA, I have been trying to focus on expanding the presence of Latinx art in the collection,” she said. Now, Gonzalez said, change is coming—even if it’s “slow and incremental.”