Laura Raicovich, who resigned as Queens Museum director last month, has countered charges levied in a report issued by the museum that she exercised poor judgement in her post and misled the institution’s board over politically contentiousness matters, in particular an event involving the Israeli government and U.S. Vice President Mike Pence.

In a two-page document titled “Summary of Findings,” which is in fact the whole of the report, Katten Muchin Rosenman, a law firm enlisted by the Queens Museum’s board, said a three-month review of emails and interviews with museum staff revealed actions on the part of Raicovich and Queens Museum Deputy Director David Strauss that “knowingly” misled the board and otherwise exhibited a failure “to comport themselves with the standards consistent with their positions.”

In an interview, Raicovich maintained that she had resigned on her own accord after differences of opinion with the board on numerous matters became too much to bear, contrary to the report’s claim that she and Strauss had been offered “the opportunity to resign.”

“With the buildup of J20 and the fact they weren’t interested in the sanctuary business—and a black cloud hanging over from an investigation that wasn’t yet completed—I made the determination that it didn’t make sense for me to stay on,” she said in reference to last year’s nationwide art strike on Inauguration Day, January 20, and actions on the part of the museum to provide aid and accessibility to immigrants.

Raicovich said she made her decision prior to a meeting with the chair of the museum’s board, Mark J. Coleman, in which he made it clear that there were differences of opinion within the board as to the tenor of her directorship. “When Mark came over for dinner and said there were some for me and some against me, it just confirmed that decision,” Raicovich said. “When I told him the next day that I had decided to resign, I told him I’d be happy to stay to make a proper transition. That’s when he got back to me and said, ‘The board wants tomorrow to be your last day.’ Clearly my decision was the correct one.” (Asked to comment by ARTnews, a representative for the museum’s board reasserted the report’s claim that an offer to resign had been extended.)

The investigation, initiated by the board, stemmed from the controversy surrounding a space-rental event last November, during which the Israeli government staged a reenactment of the historic vote that established the state of Israel in 1947, when the United Nations convened in the building that now houses the museum. The report, which was made public yesterday in an article in the New York Times, stated that Raicovich “showed immediate hostility to hosting the event at the museum even before consulting with the board.” It also contends that, together with Strauss, the deputy director, she informed the board of a policy that prohibited rental events from being political in nature. The report claims that such a policy did not in fact formally exist but that the board was led to believe otherwise.

Raicovich, in response, said that the nature of the event was problematic for numerous reasons. “Museums rely on event rentals as sources of revenue that help realize programs—they’re an essential part of operating income,” she said. “But it’s also important that they be distinguishable from regular programming at the museum. You don’t do art auctions, because that could be confusing. Events can’t be open to the public, because that could confuse the public. One of these longstanding practices we had is not allowing renters to use the space for political events.”

Raicovich said that there had been miscommunication among staff as to what had been promised to the prospective renters and when, and she conceded that the renters had reason to presume that a deal had been reached prior to any contract being signed. (When the controversy developed, there was confusion in the press about whether the event had been canceled or was still contingent on negotiations.)

The former director said that she learned about the event from a Google Alert for an article in the Jerusalem Post announcing it, but even then was led to believe that, because no deal had been finalized, there was still time for deliberation with the board. After the newspaper story, further description of the event provided by the renters raised flags, according to Raicovich. “When we got the event description it became clear to me that, with Mike Pence being the keynote presenter, the nature of the event was more political than I was comfortable with for a space rental,” she said. “I said to the board that, because of the involvement in a prominent way of the vice president, I felt it went beyond being a simple historical celebration.”

The board at first decided to decline the event, owing to what it now characterizes as misinformation as to the status of the arrangement, but ultimately allowed it to happen when controversy erupted over what some perceived as anti-Israeli sentiment on the part of the museum’s part. 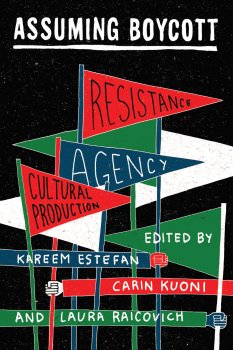 Also at issue in the report is Raicovich’s involvement as one of three co-editors of Assuming Boycott: Resistance, Agency, and Cultural Production, a 2017 anthology of writings by artists and thinkers about boycotts around the globe. The museum board said Raicovich did not disclose her involvement with the book, which it characterized as being supportive of the anti-Israel Boycott, Divestment, Sanctions (BDS) movement; Raicovich averred that a simple Google search would have made it known, and that the book itself was part of a project that predated her employment at the museum, when she was working for the politically charged public art organization Creative Time. “There was no policy that I was made aware of that required me to report any projects like that,” she said. “I also worked on At the Lighting Field [a book about Walter De Maria’s Land Art piece in New Mexico], and nobody seemed to have a problem with that when it came out.”

In addition to her involvement with the book, the Queens Museum board took issue with the use of museum funds to pay a fellow co-editor of the book, which Raicovich said involved $4,000 in discretionary funds that she had at her disposal as director. “From my perspective there were artists —Tania Bruguera, Naeem Mohaiemen—who were contributing to the book and had longstanding relationships with the museum,”
she said. “The subject of the book was cultural production intersecting with the real world and real-world issues, and it seemed to be that was perfectly in alignment with the kinds of programming we were doing at the Queens Museum. It didn’t seem to me like there was an issue there.” After the issue was raised by the board, Raicovich said, she reimbursed the museum.

“I never participated in misleading the board,” she said. “What I did participate in was a book I don’t think they liked. I think that’s why we are where we are today.”

She said the book aspires to do more than focus on boycott in any one time or place. “I’m not sure how many of them have read it. There is one section of the book out of four that is devoted to the BDS movement, and that’s the only part that is being discussed. There are three other sections that are equally if not more important to the way that artists are navigating the cultural and political landscape globally today.”

Raicovich said she still considers that part of her charge in the art world. “I think that there is a real need to have these conversations. The reason it’s called Assuming Boycott is that we are living in a moment when we have to contend with having conversations about this stuff. Stopping the conversation is the worst part.” Museums should, instead, “talk about all the different tactics and methodologies that artists are using to engage in the world today,” she said. “I think we need more of that, not less.”