In 1974, the Nigerian government asked the British Museum to loan back an object that had been looted from the country more than seven decades earlier. That object, an ivory mask that once belonged to royalty in the Kingdom of Benin, depicts Idia, a queen active during the 16th century, and though it is cracked in parts, it retains its nearly unparalleled beauty. On its website, the British Museum calls the work “among the most enduring and emotive examples of the representation of women in Benin court art.”

“It’s a small thing, only twenty-three centimeters long, but I can’t look at it without feeling moved,” writes Barnaby Phillips in his new book Loot: Britain and the Benin Bronzes (Oneworld Publications), a deep dive into the story of the Benin Bronzes. “The queen’s eyes are dark, inset with iron pupils and lids of bronze, making a lovely contrast with the aged ivory. She has a haunting feminine beauty.”

It made sense that Nigerians wanted the mask to act as a mascot for a festival known as FESTAC ’77, a celebration of the continent’s culture. But for that to happen, Nigerian officials were going to have to free her from “prison,” as Erhabor Emokpae, the Edo artist who lobbied the government to get the loan, once put it. With pan-Africanism finding favor around the world, the Nigerian government hoped that the political moment would enable the country get back one of its lost cultural treasures, if only temporarily.

It turned out that their optimism was misplaced: the British Museum rejected their plea “on conservation grounds,” claiming that the humidity in Nigeria would damage the work. In other words, the climate in which the mask was originally made would, in the eyes of the British, prove too hostile for it. Nigeria’s Daily Times called the quagmire a “tragi-comedy.” In a fittingly dark conclusion, despite the protests of Africans living in London, the work never made it to Lagos. Today, it is still housed by the British Museum, which has owned it since 1910.

In recent years, there is a growing awareness among people living in the West that the Queen Idia mask and thousands of objects like it were looted. Taken by British soldiers in 1897, these works, collectively known as the Benin Bronzes (though many are also crafted from ivory and brass), are held in institutions around the globe. Calls for their return are reaching a fever pitch, with Germany vowing last week to start sending back its Benin Bronzes next year. If these protests are relatively new among Europeans and Americans, they are old in Nigeria, where politicians, museum directors, artists, and local citizens have long pointed to the plundering of these works as a sign of colonialism’s long-term impacts on the region.

[What are the Benin Bronzes, and why are they important?]

“We shouldn’t have to ask, over and over, to get back what is ours,” Edo artist Victor Ehikhamenor tells Phillips in Loot, which focuses on how the cache of artifacts was stolen by the British and subsequently dispersed. The story Phillips tells is one we’ve heard before, most recently in curator Dan Hicks’s 2020 book The Brutish Museums: The Benin Bronzes, Colonial Violence and Cultural Restitution. But rarely have books like Loot focused so in-depth on the perspectives of Africans. As Loot makes clear, whether in the form of Nollywood films or oral histories handed down across generations, Nigerians have had a lot to say about the Benin Bronzes. 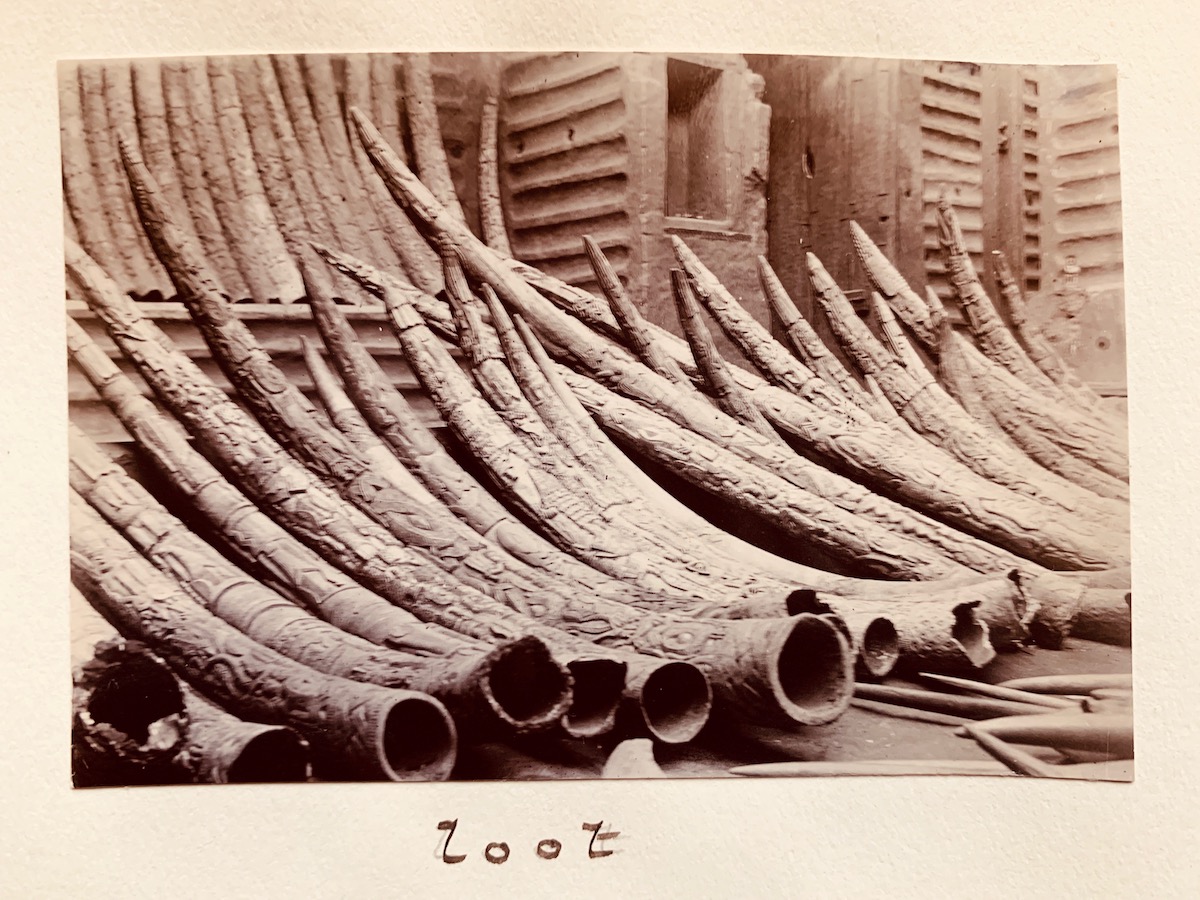 In 1897, British officers looted tusks from the Kingdom of Benin. Key among Phillips’s achievements is his ability to show the pain that the plundering of the Benin Bronzes continues to cause. It’s something the author understands personally. He was born in Kenya in 1968 and has worked as a BBC correspondent while posted in countries such as Mozambique, Angola, Nigeria, and South Africa. “I’ve lived much of my life in Africa,” he writes toward the end of his book, “and know how, in conversations and friendships, it is rare to feel truly free of the suffocating weight of colonialism.”

Phillips kicks off his stylish tome with an in-depth history of the Kingdom of Benin, which now forms much of Nigeria’s current Edo State. One of Phillips’s few missteps comes early on, when he makes the mistake of starting that lineage by centering Europe, opening that section in 1486 with the first contact between Benin and Portuguese explorers. But Phillips quickly recovers by doing something most writers have not: he paints a touching portrait of the kingdom and the people who inhabited it.

We learn of how the kingdom’s power “waxes and wanes” between the 15th and 19th centuries, and we get a sense of the meaning of certain important rituals of the Edo people, including human sacrifice. Europeans used that rite to label Benin a kingdom that “stinks of death,” as British diplomat Richard Burton wrote upon his arrival in 1862. Refusing to only rely on European accounts of the era, Phillips also introduces contemporary Nigerian histories, which suggest that human sacrifice was intended to “bring good fortune to the community, to ensure success in warfare, to demonstrate the authority of the royal family and to drive out evil force.”

Phillips’s account of the fateful British-led 1897 mission that led to the looting of the Benin Bronzes likewise pays mind to the words of Nigerians. He tells of how the explorer James Phillips (no relation to the author of Loot) was warned not to visit and how he did so anyway, ultimately leading to his death at the hands of senior chiefs. There is a sense of tragedy about all this: Prince Edun Akenzua, the great-grandson of the kingdom’s ruler at the time, Oba Ovonramwen, calls the event “the day we lost our independence.”

The subsequent events are now well-known. The British pillaged the kingdom, plundered its goods, set it aflame, and later killed its high-ranking members, including the Oba. It is easy to lapse into ire while writing of these events. Phillips does not. He attempts as much as possible to remain a neutral interlocutor, offering evidence that, contrary to popular belief, the picture of the raid on the Kingdom of Benin may be more complicated than it initially seems. According to Phillips, several accounts of the plundering suggest that many victims met their death through human sacrifice, not at the hands of the British. Then there is the issue of the flames—Phillips writes that there is “strong evidence that the great fire of Benin was accidental,” although many Edo people believe otherwise. He describes it as “difficult” to discuss as much with many Nigerians even today.

When the Benin Bronzes came to Europe, they were seen “not as objects of religion, but as objects of art,” per Phillips—aesthetic inspiration, in other words, for modernists like Franz Marc and André Derain, the latter of whom at one point even owned a sculpture from the cache. As some objects headed to luxe presentations at the British Museum and elsewhere, others headed to auction, where they netted top prices. To some degree, the Benin Bronzes continue to attract attention when they are offered for sale. The current public record for a Benin Bronze at auction was set in 2007 with the sale of a sculpture of an Oba at Sotheby’s. Deaccessioned by the Albright-Knox Art Gallery in Buffalo, New York, it sold for $4.74 million. When private sales are taken into account, the record is even higher. According to Loot, one work known as the Ohly Head sold for $10 million.

In one thrilling stretch, Phillips attempts to plumb the psychologies of Europeans who still own Benin Bronzes. He describes a visit to the London home of a collector who has requested anonymity. From her father, she has inherited sculptures of the Oro bird, which played a crucial role in a 1515 battle; she calls the pieces “family heirlooms.” Has she thought of giving them back? “I don’t feel like giving them anything,” she says. “It’s not secure.” When Phillips leaves her, she’s still holding on to her bird sculptures, as if out of fear that she’ll lose them.

Gradually, however, Europeans are releasing their grasp on the Benin Bronzes—and it’s possible that a book like Loot could offer some readers the context needed to get behind Phillips’s cause.

When these objects are sent back, many will go to the brand-new Edo Museum of West African Art in Benin City, Nigeria. There have been previous attempts to build institutions worthy of holding the Benin Bronzes, however. In 1957, the British-born Kenneth Murray inaugurated the National Museum in Lagos, effectively laying the groundwork for an institutional network in the country. By 1960, as many as 30,000 people a day might come to the museum. But now, the National Museum has fallen into disrepair—Phillips writes that, on a recent visit, the grounds were strewn with trash, and the only other people in its galleries were a visiting school group. As Phillips tells it, institutions in the country are forced to fend off threats of theft, and too-small staffs must deal with disorganization and limited resources.

Murray’s legacy is one of “colonial museums that lacked indigenous roots but sought to imitate those of the mother country, and which have now withered and all but died,” Phillips writes, and this accounts for their failure. For that reason, EMOWAA could be a game-changer when it opens in 2025. With a building designed by visionary architect David Adjaye, EMOWAA will bear out connections to various members of the local community. It will be an institution for West Africans by West Africans. As artist Enotie Ogbebor tells Phillips, “Now more than ever, we need these works to come so that our people can behold them.”