Maurizio Cattelan may no longer have a golden toilet in a Guggenheim bathroom, but you know what he does have? An Instagram page. And it is glorious.

Its glory comes mostly from the fact that it is called “The Single Post Instagram,” meaning that it will only have one post. Or that’s what we’re led to believe: a rep from the artist’s gallery, Marian Goodman, confirmed on the phone that, yes, the Instagram user @mauriziocattelan is actually Cattelan, and that the single-post approach does appear to be the deal here.

And so, if things go as planned, the one post will regularly be deleted, and another post will go up in its place. Chances are it won’t appear in the feed of his followers, and once it is deleted it will not exist anywhere online. He is following exactly zero people. Which makes the whole operation rather antithetical to the way you’re supposed to work the ‘gram.

We did not discover this strange beast of a social media presence until today, but a source sent over a screenshot of the image from Friday, which has now since been deleted, and it sure is intriguing. 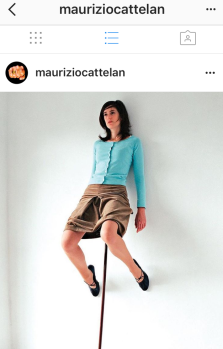 Given the circumstances, one could be forgiven for thinking this is one of Cattelan’s very lifelike sculptures. But some sleuthing revealed that this is actually a real person—it’s photo evidence of one of Erwin Wurm’s “One Minute Sculptures,” seen most recently at the Austrian pavilion on this year’s Venice Biennale. The work asks the viewer to follow a very precise set of instructions involving an object for 60 seconds, and then the work disappears forever, to be replaced by another sculpture. Huh, that seems familiar!

Currently, the post is of a pigeon teetering perilously on the side of a ledge. But if you click on that link anytime after this, well, it will probably be something completely different! The pigeon post will be taken down, rendering this hyperlink totally dead, and a new post will be up. Because that is just how Maurizio Cattelan throws down on his wild and crazy Single Post Instagram. 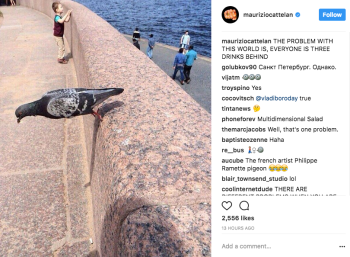 The caption—which, again, is most likely deleted right now—doesn’t appear to be anything related to the pigeon. It just says, “The problem with the world is, everyone is three drinks behind.” Cattelan doing Bogart, everybody!

In the comments, the fashion designer Marc Jacobs commented, “Well, that’s one problem.”