One hundred thirteen: That is the number of artists who are joining the holdings of the Museum of Modern Art for the first time through the donation of the Gilbert B. and Lila Silverman Instruction Drawing Collection to the New York institution. All told, that gift features 800 works by more than 300 artists, with MoMA newcomers like Bill Bollinger, Sandra Binion, and Rammellzee included alongside canonized figures like John Cage, Hanne Darboven, and Mike Kelley.

The Silverman name may be familiar to MoMA watchers. The Detroit couple donated their formidable Fluxus holdings to the museum in 2009 and the archives of the storied Avalanche magazine in 2005. The latest gifts “add another dimension to our collection,” Christophe Cherix, MoMA’s chief curator of drawings and prints, said, explaining that they span from conceptual proposals to specifications for fabricating pieces. They allow viewers “almost to go into the artist’s mind, to understand the very beginning of a great work of art.” 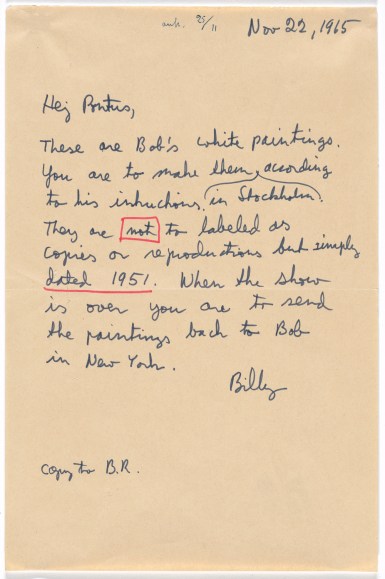 Gilbert, who died in 2016 at the age of 91, spent his life in the real-estate industry, and “he was an engineer by training, so the idea of a blueprint was very appealing” to him, Lila said in a phone interview from Detroit. She credited her husband of more than 50 years as being the driving force behind the collection. “He was very focused in the pursuit,” the artist Jon Hendricks, who has served as curator for the Silverman collection, added. “He went all around the world looking for pieces.”

Picking highlights from so large a trove is a hazardous business, but notable works include Yoko Ono’s Instructions for Paintings (1961/62), which appeared in MoMA’s 2015 show on the artist’s early years; diagrams that Robert Rauschenberg drew in 1965 for the creation of his 1951 “White Paintings”; and a drawing that a 26-year-old Michael Asher made in 1970 to prep his seminal installation at Pomona College in California, which in part involved leaving the museum open to the street 24 hours a day.

Many of the drawings propose artworks or exhibitions that were ephemeral in nature or never realized, Cherix said, and so they now stand as rare bits of evidence of such projects. “They invented a field,” he said of the Silvermans’ efforts amassing such unusual material. “It took a lot to say: we are going to focus on that.”

“I had a wonderful life with Gilbert,” Lila said, “and I am just delighted that the works are now at MoMA.”