This afternoon, in the Sackler Wing of the Metropolitan Museum of Art in New York, a mother and daughter threw coins into its reflecting pool while a couple posed for engagement photos in front of the Temple of Dendur, the man in red pants and a gray blazer, the woman in a black jumpsuit. A long line snaked out of the temple. It was tranquil, most people speaking in a whisper. That grand space has such an effect on people.

By about 4 p.m., though, an unusually large group of people had formed along the wing’s pools, and it kept getting larger. Among the assembly was the artist Tim Davis, wearing an orange hat and a bit of scruff. “I came here to see the David Hockney show,” he said. “I didn’t feel like waiting in line.” He had run into an artist friend who told him, “There’s an art action, and we’re going to protest opioids, and there’s a die-in.” This friend asked him if he’d be willing to throw pill bottles into the pools at the Temple of Dendur. “Look at me,” he replied. “Don’t I look like a guy who was born to throw pill bottles into a moat?”

Also nearby was the fashion director Havana Laffitte, who was sitting with her daughter and a friend she didn’t even know was planning to come. (The event had been organized very quietly.) “I’m obviously a big fan of Nan’s work and very sympathetic of what she’s gone through,” Laffitte said, “and I know other people who have had a similar experience.”

At around 4:10 p.m., heads turned as the Nan she was referring to entered: the photographer Nan Goldin, unmissable with her curly red hair. She walked up to some of the people congregating, and there was a brief discussion. And then it began. 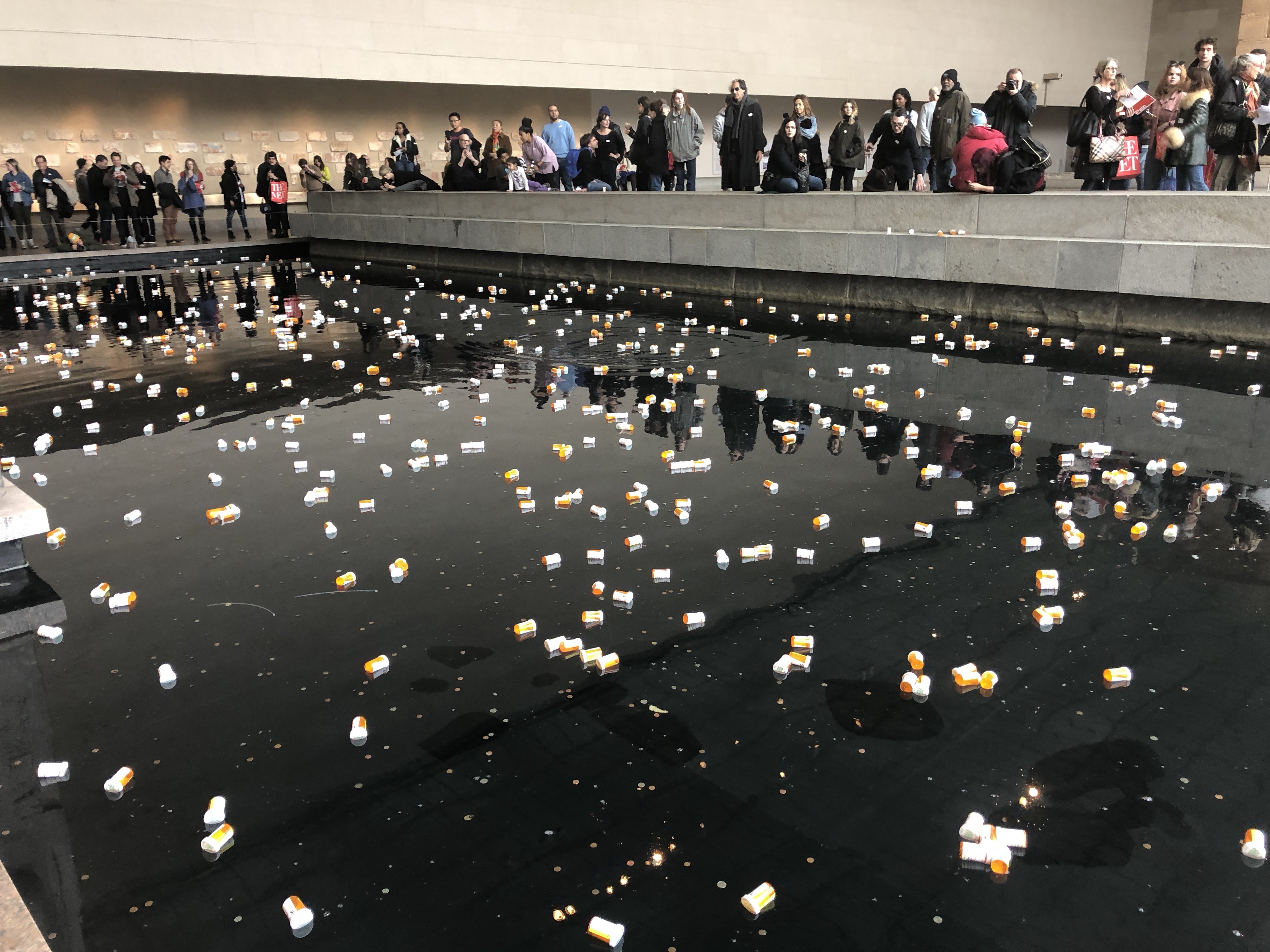 Many people along the pool suddenly began to throw pill bottles into the water—there were scores of the little plastic containers—as others whipped out black banners, one reading “FUND REHAB,” the other “SHAME ON SACKLER.” Goldin, brandishing white type-written pages, spoke in short phrases, and the crowd echoed her as a human microphone. She said at one point, “In the name of the dead. Sackler family. Purdue Pharma. Hear our demands. Use your profits. Save our lives.”

Some people handed out pamphlets that were designed to look like official Met materials, but were emblazoned with “Pain,” an acronym for Prescription Addiction Intervention Now, the group that Goldin has started to put pressure on Purdue Pharmaceuticals, the makers of OxyContin, and some members of the Sackler Family, the company’s principal owners. The group is calling for them to fund treatment programs and to take other steps to combat the opioid crisis. In the pamphlet, the group demands that “instead of continuing to wash their money in great institutions (like the Metropolitan Museum of Art) they donate their money to helping combat the opioid epidemic.” (Sackler family members have funded projects at Harvard, the Louvre, Tate Modern, and elsewhere, as the New Yorker and Esquire have reported in stories about Purdue’s development and marketing of OxyContin.) 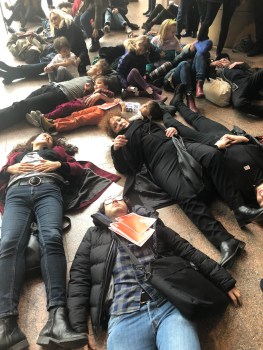 The pamphlets contain statistics about the crisis, like “130 people die a day from opioid overdoses,” “at least 200,000 people have died since 1999 from overdoses involving opioid painkillers,” “$35 billion—Purdue profits from OxyContin, the nation’s bestselling painkiller.” It also includes a list of demands, among them that the Sackler Family and Purdue should invest 46 percent of their profits toward ending the epidemic, and that they should “advertise the dangers of their products as aggressively as they sell them to the public.”

Purdue, which in 2007 paid a fine of more than $600 million for falsely stating that OxyContin is less addictive than other painkillers, has maintained that it has acted properly in marketing the drug, that it has taken concrete steps to curtail abuse, and that it funds programs that promote treatment and abuse prevention.

Tourists gawked, some took pamphlets, and members of the protest group answered questions. Meanwhile, some Met guards gamely asked people not to touch the artifacts while at least one attempted to usher the large group out of the museum. But they did not intend to move quickly. “Die!” Goldin cried, and people began to fall to the ground along one side of the pool. Goldin collapsed to the ground as well.

From the ground, the protesters cried, “Sacklers lie, people die.” 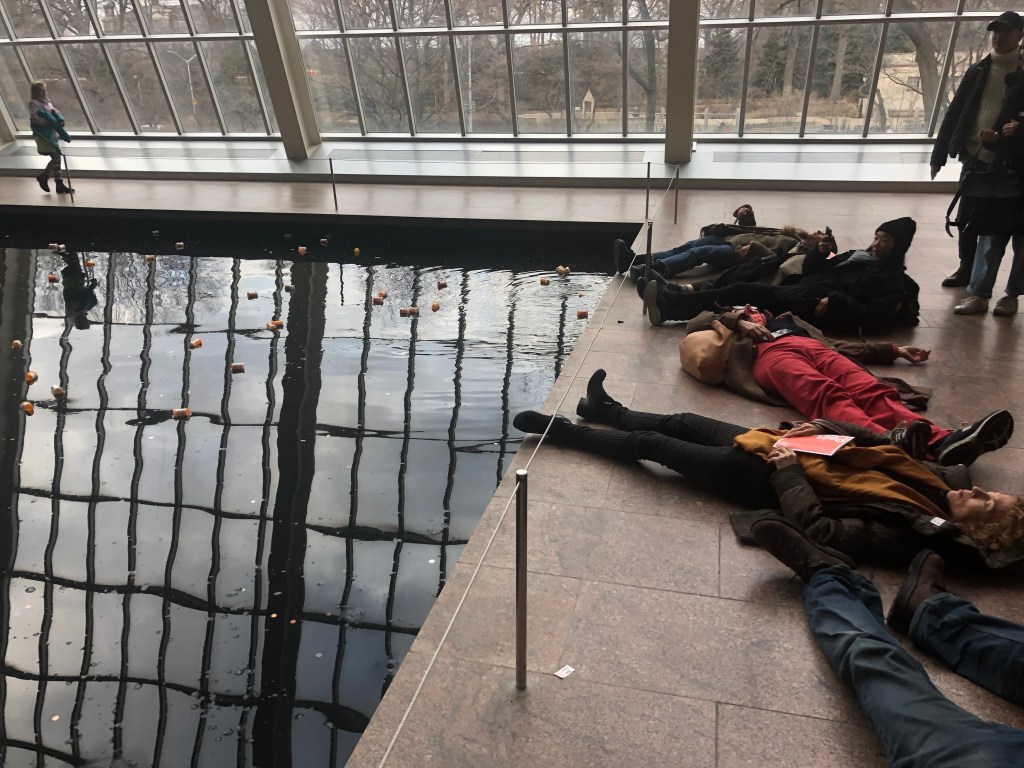 This was Goldin’s first major public action since she began her public opposition to Purdue in January, when she published an essay and portfolio in Artforum in which she discussed becoming addicted to opioids after being prescribed OxyContin following a surgery, and going clean only after two-and-a-half months in rehab. “The Sacklers made their fortune promoting addiction,” Goldin wrote, adding later that “the Sackler family and their private company, Purdue, built their empire with the lives of hundreds of thousands. The bodies are piling up. In 2015, in the U.S. alone, more than thirty-three thousand people died from opioid overdoses.”

Later in the month, a New York Times article detailed Goldin’s battle with addiction, which involved her at one point overdosing on heroin and fentanyl, as well as her burgeoning protest efforts. After handing out leaflets at the women’s march on the one-year anniversary of the inauguration of President Trump, she suggested that the group might next “go to the Museum of Natural History or the Guggenheim,” both beneficiaries of Sackler funds. 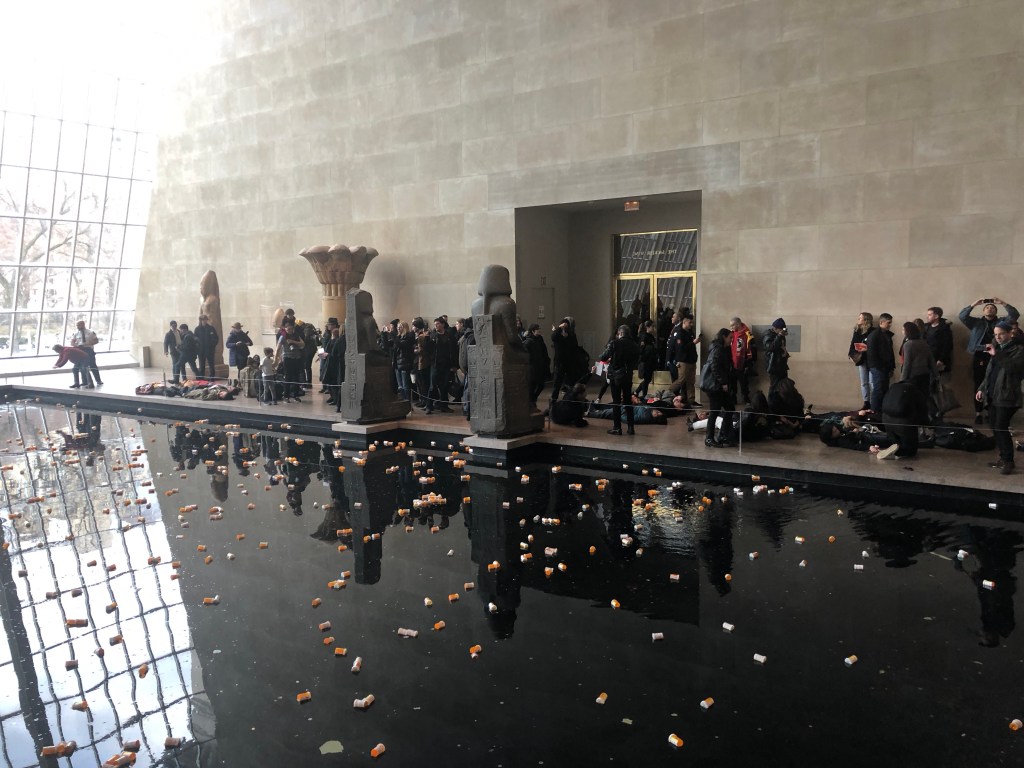 The Met built the Sackler Wing after approaching Arthur M. Sackler in 1973 about funding it, and he brought on his brothers Mortimer and Raymond Sackler, who were all in business together. The Wing opened to the public in 1978. Elizabeth A. Sackler, a daughter of Arthur M. Sackler, who died in 1987, has stated support for Goldin’s cause, saying that, by the time Oxycontin was introduced in 1995, Raymond and Mortimer were the main owners of Purdue, and that Arthur’s share of the company had been sold shortly following his death, meaning that no members of his portion of the the family have used money from the sale of Oxycontin to fund their philanthropic efforts. (The Met declined to comment. Through a spokesperson, Arthur M. Sackler’s widow, Jillian Sackler, emphasized in a statement the fact that his philanthropic work was done well before the development of Oxycontin. “Passing judgment on Arthur’s life’s work through the lens of the opioid crisis some 30 years after his death is a gross injustice,” she said in part.) 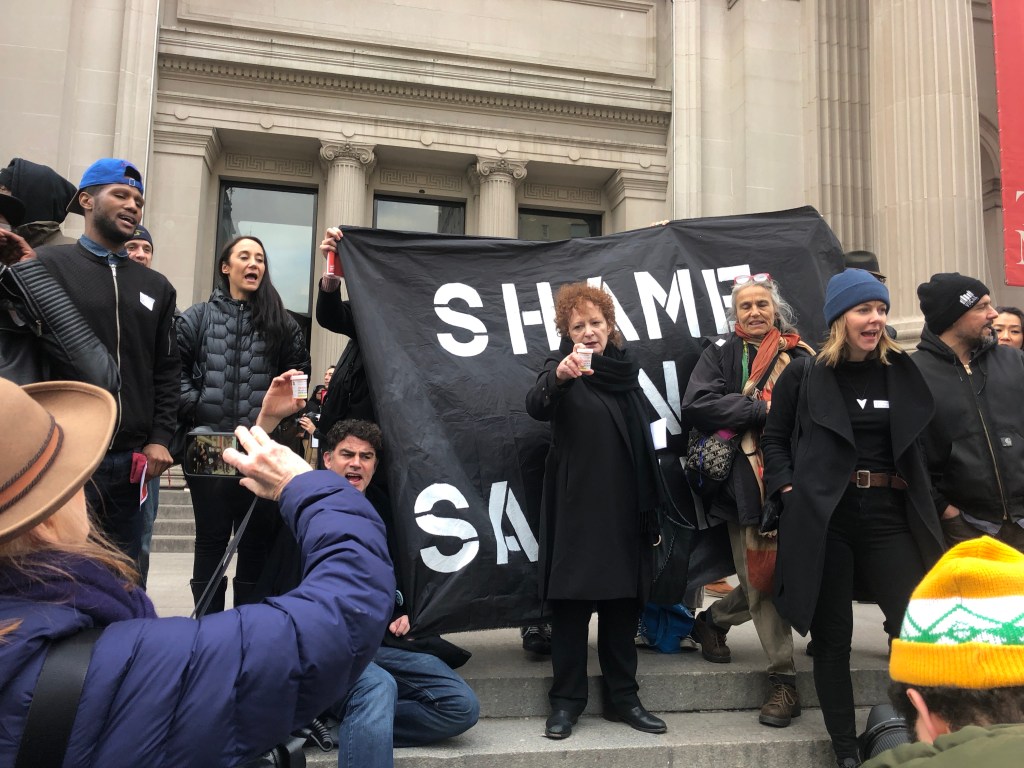 After a few minutes, with the die-in concluded, the group marched out through the Met’s galleries for Egyptian art, accompanied by guards, chanting all the way: “Sacklers lie, people die.” They made their way to the front steps. Goldin stood in front of a banner, held a pill bottle out in one hand, and continued her speech with the protesters gathered around her.

As Goldin concluded, she said, “We are just getting started! Read the facts! Read the stats! We’ll be back!”