The masterpieces are all there, but they’ve got some new company: This is the ethos that drives the new Museum of Modern Art in New York, which opened on Thursday to the press, following a four-month-long closure and a renovation and expansion project with a $450 million price tag. The rehang is all about quietly shocking its audience, placing a Faith Ringgold near a Picasso masterwork, for example, and equalizing the playing field between painting and mediums that had historically been considered lesser.

What, then, are the biggest surprises? Below, ARTnews has collected 15 works that you may not have realized MoMA owned. Each work figures in the rehang’s permanent collection galleries, and they range from one of the most iconic digital artworks to a newly famous painting by the Brazilian artist Tarsila do Amaral. 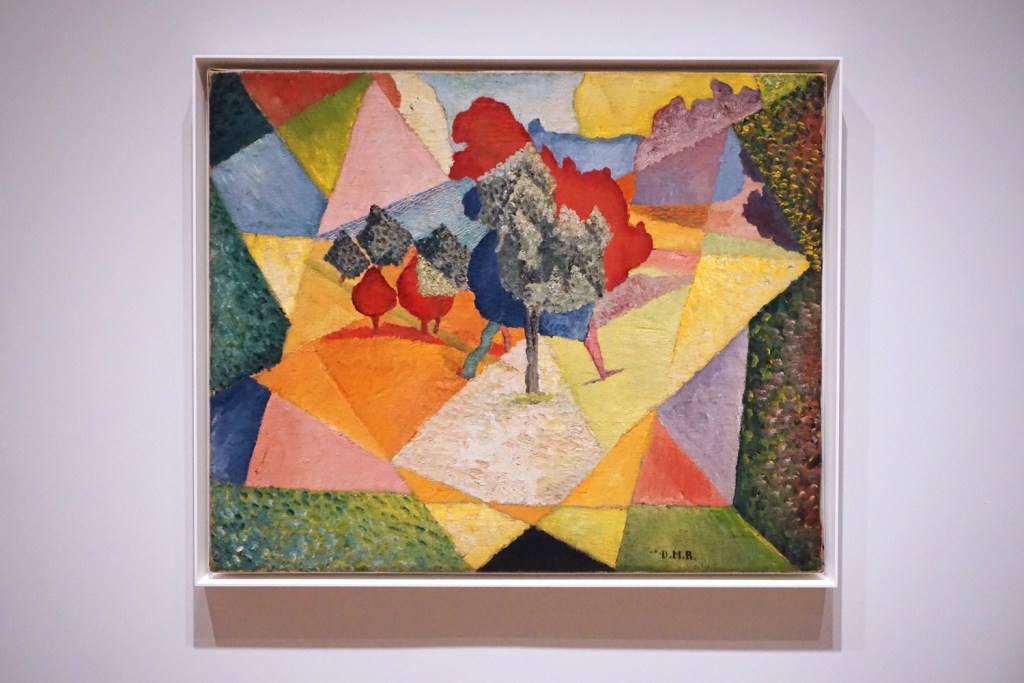 Rather than breaking modernism into a series of discrete movements, MoMA has in some cases grouped artworks by aesthetic affinities, and in a gallery titled “Ca. 1913,” alongside works by Kazimir Malevich, Pablo Picasso, and Fernand Léger appears Diego Rivera. The Mexican artist is typically grouped with other muralists from the 1930s who considered class issues, political strife, and workers’ rights in their home country through figurative painting, but here, MoMA is showing one of Rivera’s Cubist compositions, a tree-filled landscape blown asunder by intersecting, multicolored planes. 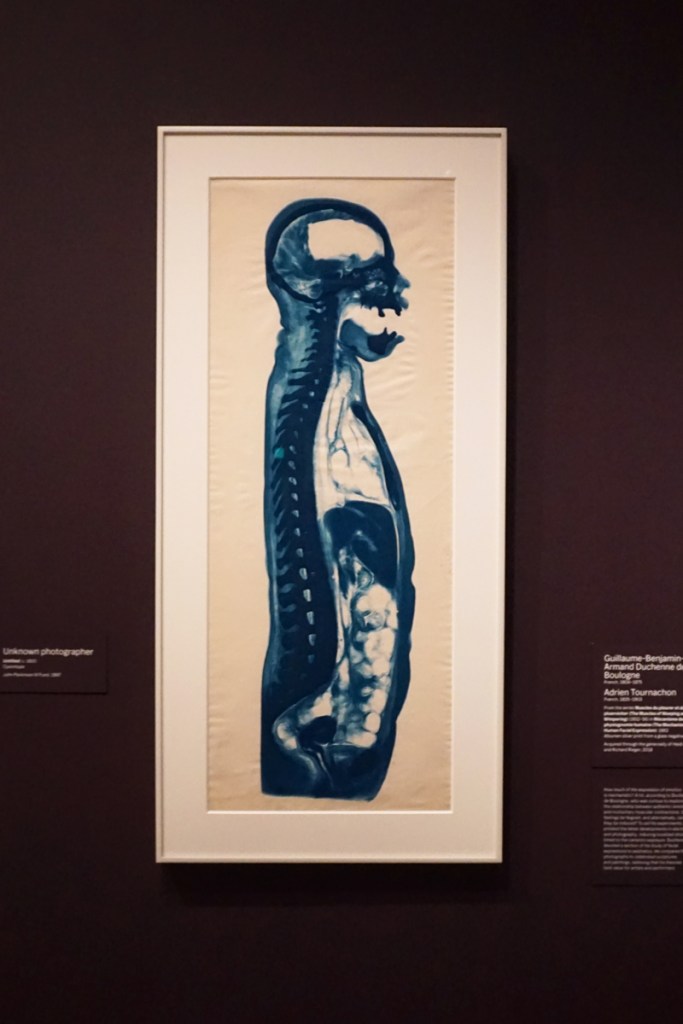 At long last, MoMA has inscribed early photography and film into the development of modernism. A game-changing gallery is given over to the subject, and it does not only feature what may typically be considered art photography, though this is present, too. One of the most shocking images here is this cyanotype featuring a cross-section of a human body, whose flesh appears ghostly through the camera’s lens. 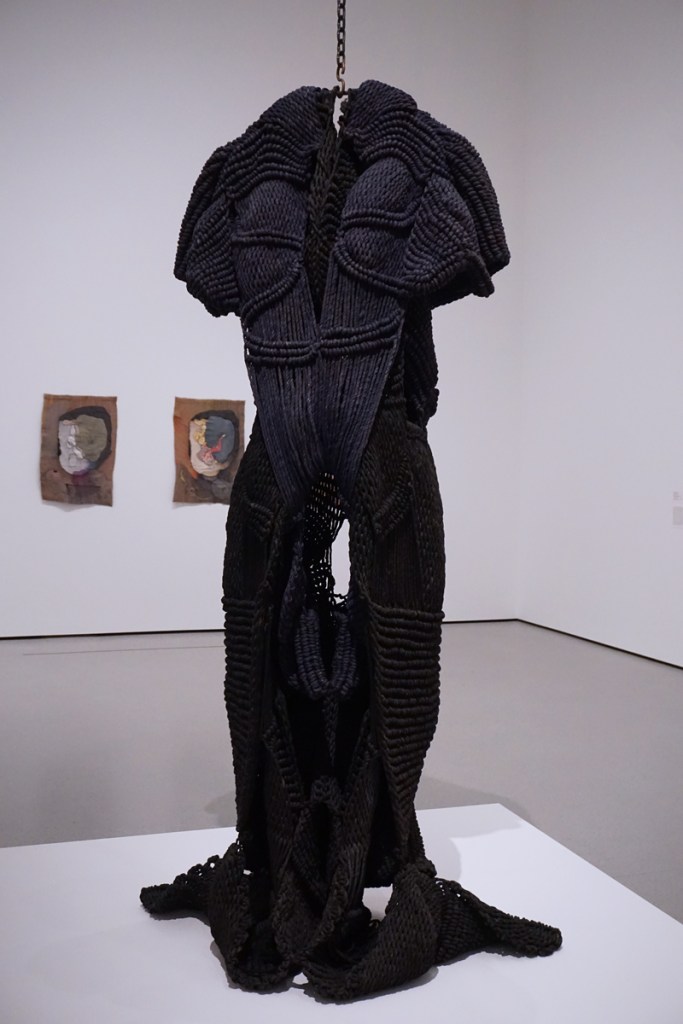 Mrinalini Mukherjee’s name would have turned few heads in New York several years ago, but an appearance in the 2018 Kochi-Muziris Biennale in India and a retrospective at the Met Breuer in New York have turned the late sculptor a genuine star. This woven sculpture, which refers to a female earth spirit from the Hindu religion, is made of dyed hemp, and it is featured in a section devoted to the notion of transformation. 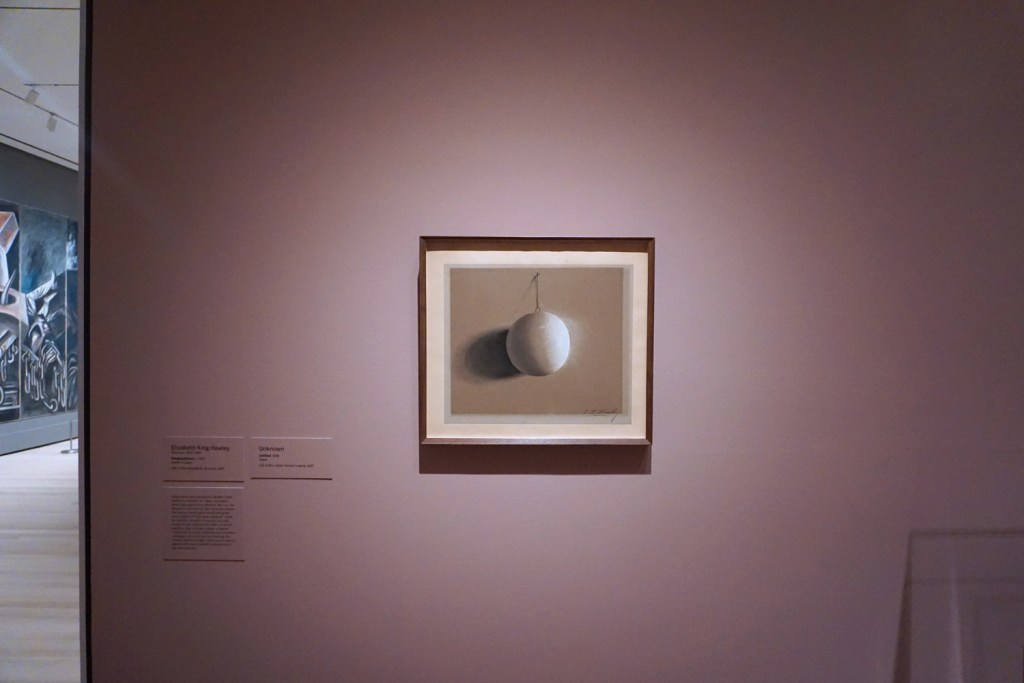 Much has been made of the conversations MoMA creates between works from yesteryear and the recent past, but what of the pairings of masterworks and pieces from yester-yesteryear? In a gallery about Surrealism and its offshoots, near famed pieces by Salvador Dalí, Frida Kahlo, and Max Ernst, there’s this Elizabeth King Hawley piece from the late 19th century—a pastel drawing featuring a suspended white sphere that, for some unexplained reason, is tethered to a beige surface by a string and a nail. The work is a deep cut from MoMA’s holdings, and it’s meant as a reference to its inclusion in the famed exhibition “Fantastic Art, Dada, Surrealism,” held at MoMA in 1936. 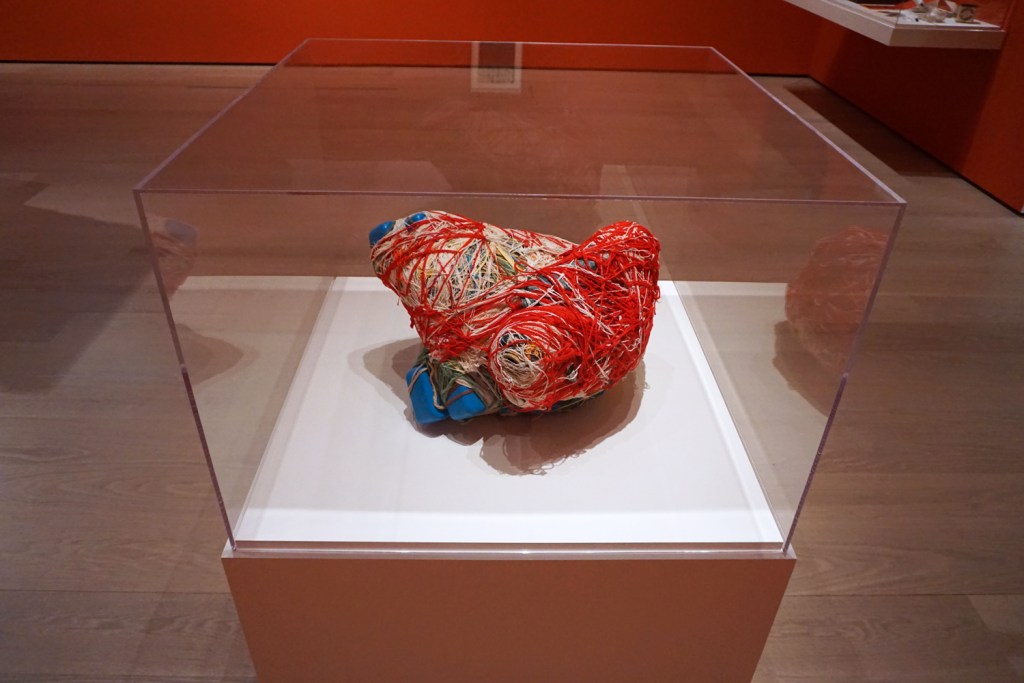 The history of Fluxus, the avant-garde 1960s movement known for raising everyday objects to the status of art, has been told many times over—Yoko Ono famously encouraged people to paint with their minds using a written text, and Nam June Paik altered art history by embracing the nascent medium of video. But that history rarely includes self-taught artists, and now MoMA has remedied this via an untitled sculpture by Judith Scott, the subject of a Brooklyn Museum retrospective in 2014 and the creator of mysterious assemblages of found objects wrapped repeatedly in string. (A bonus fact: the work was given to MoMA by ARTnews Top 200 Collectors Rebecca and Martin Eisenberg the year of the Brooklyn Museum show in honor of Matthew Higgs, the founder of the always-reliable New York alternative space White Columns.) 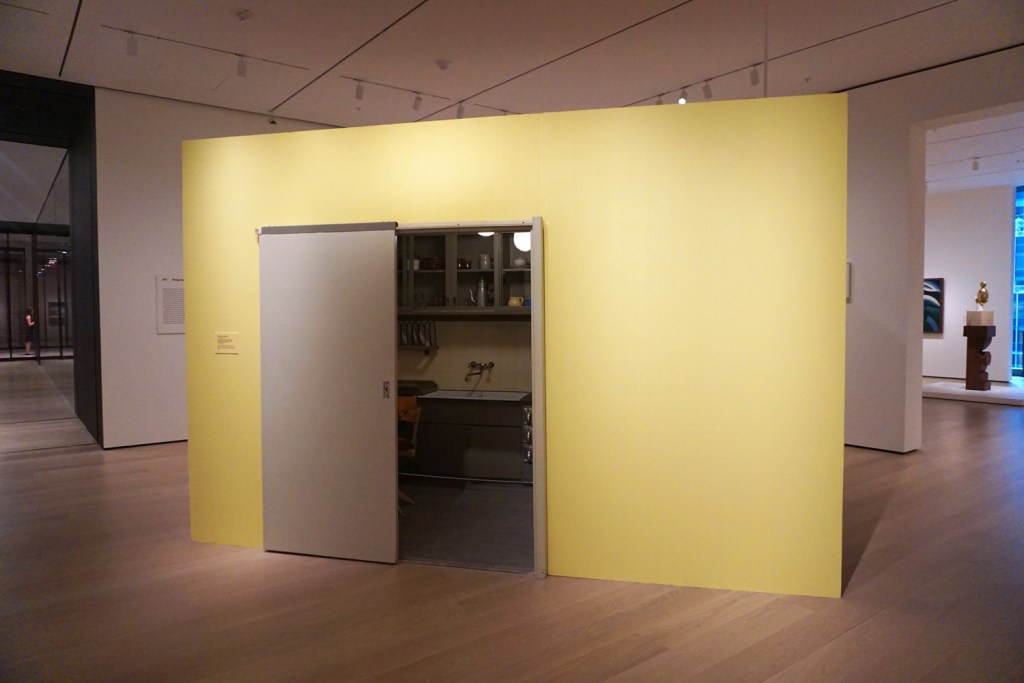 There is a new café to be found at the renovated MoMA, and there’s also a new kitchen of a different sort in the galleries, courtesy of Margarete Schütte-Lihotzky. Before becoming an activist in the resistance movement during World War II, she designed the prototype for the built-in kitchen that many of us use today. She’s one of the many unsung female designers whose work is currently being showcased at MoMA. 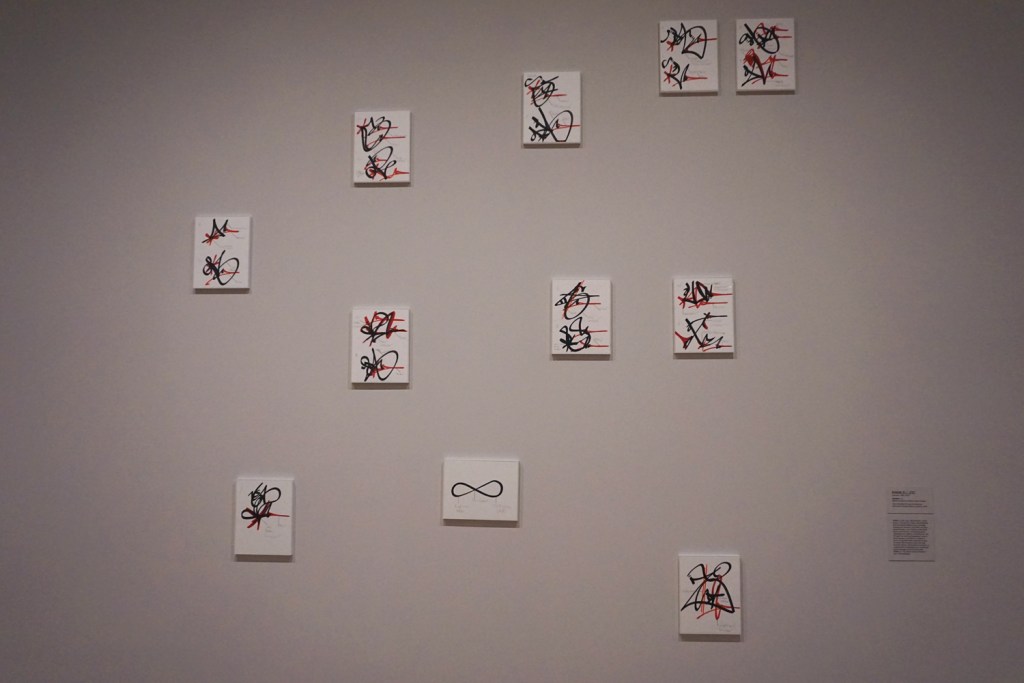 Rammellzee is a key figure in the New York art and music scenes of the 1980s, and now MoMA has paid homage to this through works related to his graffiti art. Several “Alphabet” works are on view, and they draw on the artist’s ideas about Gothic Futurism, which harnessed the power of language and the look of text to upend the rules of society. 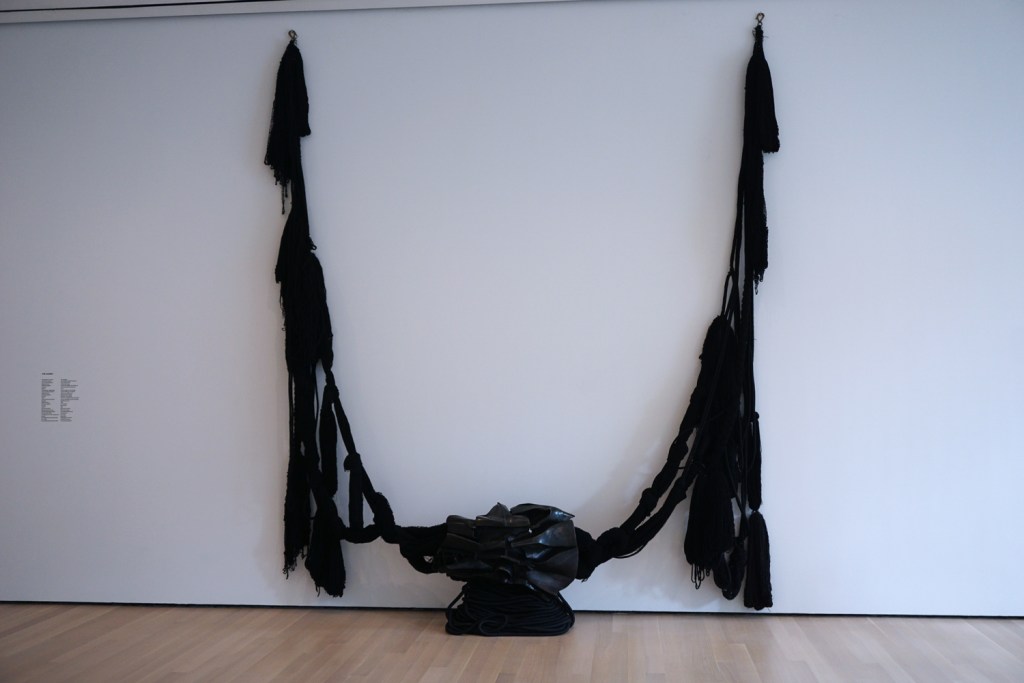 When it comes to MoMA’s fourth-floor galleries dealing with the 1940s through the 1970s, the curators have done well to highlight the multitude of ways in which artists of the era engaged with concepts related to race, gender, and sexuality. Among the best works on the floor comes early on, in a gallery of large-scale sculptures about the body during the era of the Vietnam War and the Civil Rights Movement. Barbara Chase-Riboud’s bronze sculpture comes with a poem addressing African-Americans with albinism, broaching complicated ideas about colorism in the process. In the poem, she writes: “I am as white as I am black.” 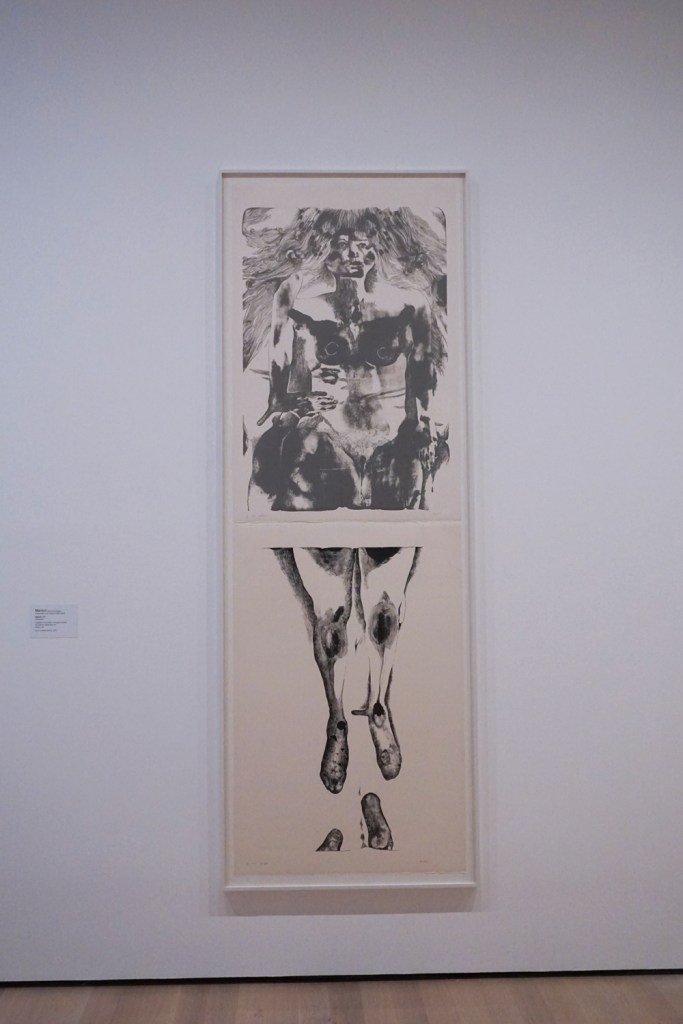 Bodies and their subjection to other peoples’ gaze are at stake in famous 1960s and ’70s works by Ana Mendieta, Adrian Piper, and David Hammons. Add to this strand of art history a new-ish figure: Marisol, who is better known for her Pop works (one is also on view at MoMA). For this lithograph, Marisol shows a female form whose silhouette comes to seem like a bloody print left at a crime scene. 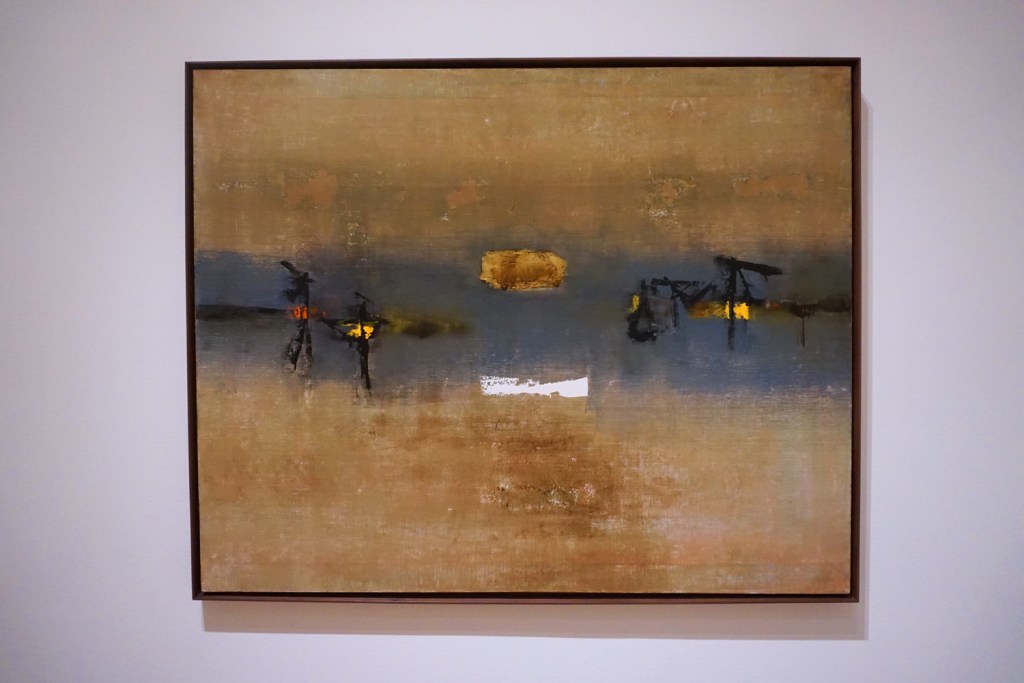 MoMA’s history of modernism has long skewed European, white, and male, and its rehang rights this error by drawing on non-Western artists outside the canon, one of whom is V. S. Gaitonde, the Indian painter whose work was the subject of a lauded Guggenheim Museum retrospective in 2014. Gaitonde’s references may have largely been to Zen Buddhism, Indian miniatures, and other non-Western sources, but MoMA has shown that his work shares stylistic commonalities with some of the very best works from members of the New York School, such as Barnett Newman and Mark Rothko. 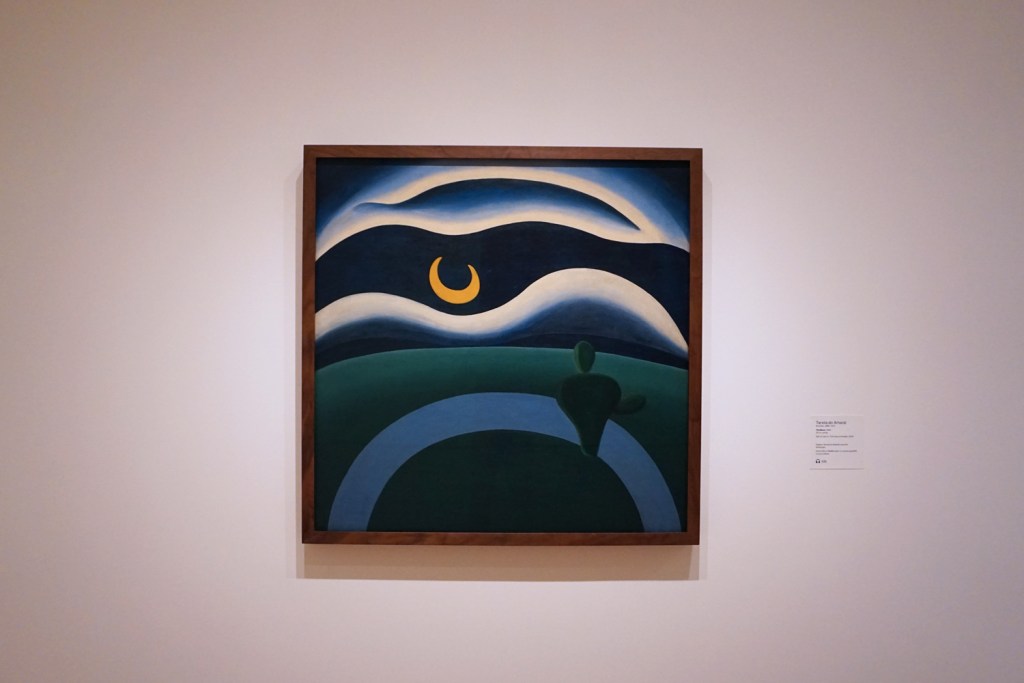 Tarsila do Amaral had the grand goal of becoming the preeminent artist in Brazil during the early part of the 20th century, her home country, and thanks to a 2018 survey at MoMA, she has become not only that, but one of the most important female modernists. This painting, a serene landscape with curvaceous clouds and a blobby cactus, is the work’s MoMA permanent-collection-hang debut following its acquisition this year, when it became the only canvas by the artist to be owned by a North American museum. 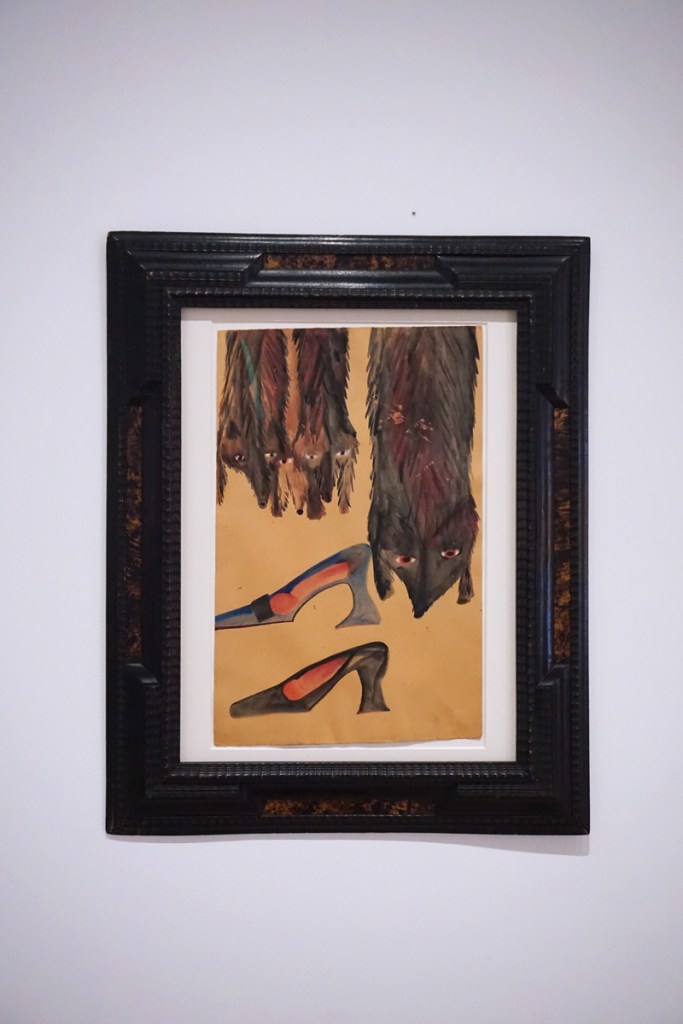 New York museums have finally woken up to Carol Rama, a long unknown Italian artist who didn’t fit into any of the movements she worked contemporaneously with during the postwar years, and MoMA is showcasing this winsome composition featuring foxes and a pair of shoes, placing it conversation with works by Agnes Martin, Yvonne Rainer, and Anne Truitt—female artists whose work has recently been seen often in institutions in the city. With its odd combination of objects, the work hints at Rama’s transgressive spirit. 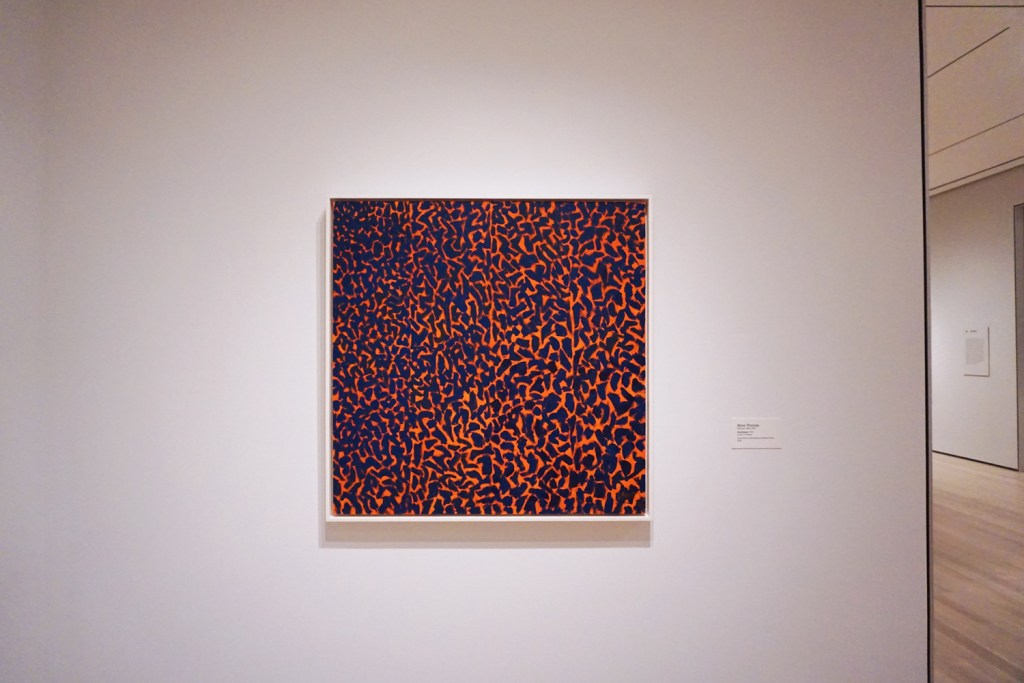 One gallery on MoMA’s fifth floor is called “Henri Matisse,” which may be a misnomer, because while it does include the French painter’s spare experiments with color theory, it also includes one other artist: Alma Thomas. Thomas’s work was hung in the White House in 2015 by then–U.S. President Barack Obama, who exhibited it during a Passover Seder, and that same year, MoMA snatched up this incredible abstraction constructed from cool blue and fiery red-orange forms. 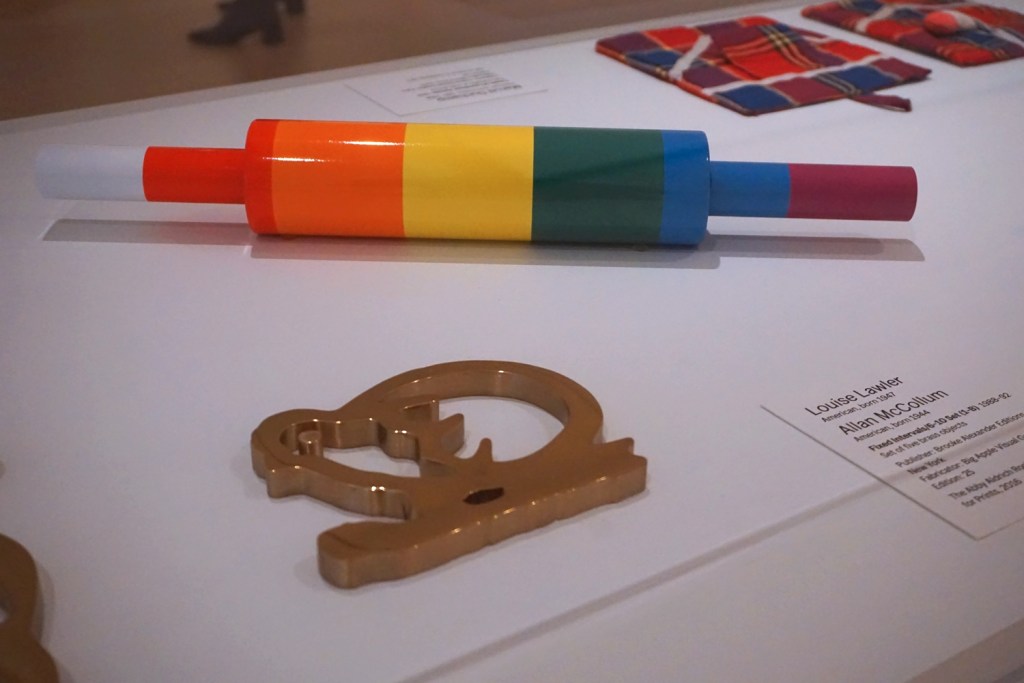 An experiment with color of a much lighter sort can also be found in a gallery devoted to artist Florine Stettheimer and her social circle, where this Cosima von Bonin sculpture appears. It’s a rolling pin–like form lined with bright tones spanning the color spectrum. The artist originally accompanied it with a sweet statement: “Take the pastry of a concept, roll it out with the colors of the rainbow, and serve it up with a dollop of debate.” 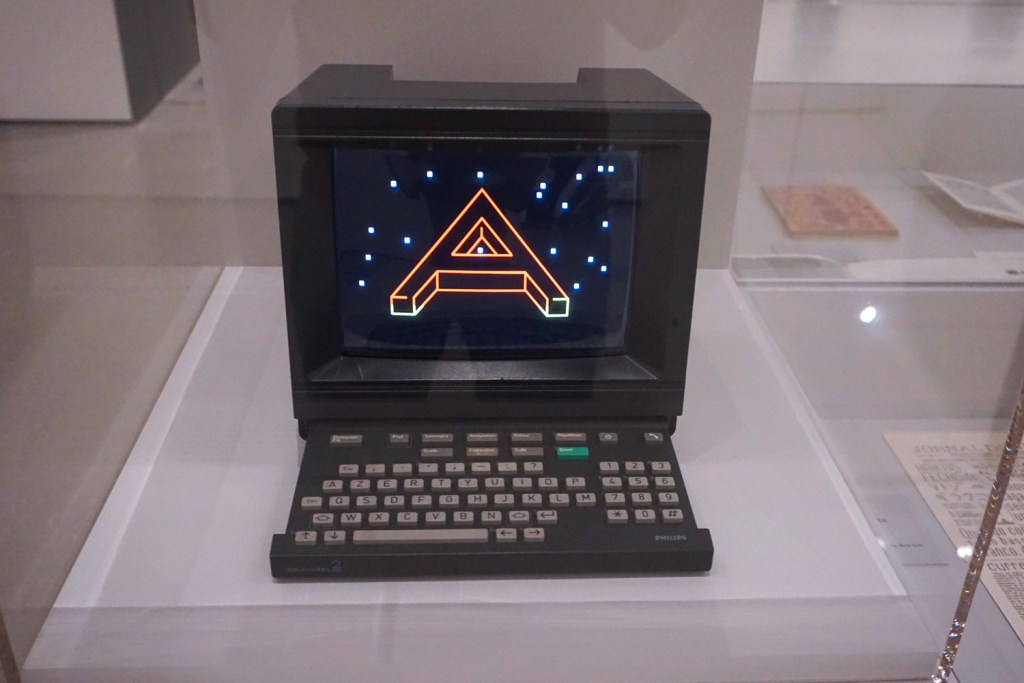 MoMA’s embrace of digital art is among the most jarring—and welcome—aspects of its rehang. A work by JODI, one of the essential net artists, is afforded a full room to itself, and the museum has also included this Eduardo Kac piece, which relies on Videotexto, a pre-internet technology from 1980s Brazil, to display a Neo-Concrete poem. On a computer screen appears a grouping of letters that dance around, suggesting a reconfiguration of the way we read text—and look at images—in the digital age.