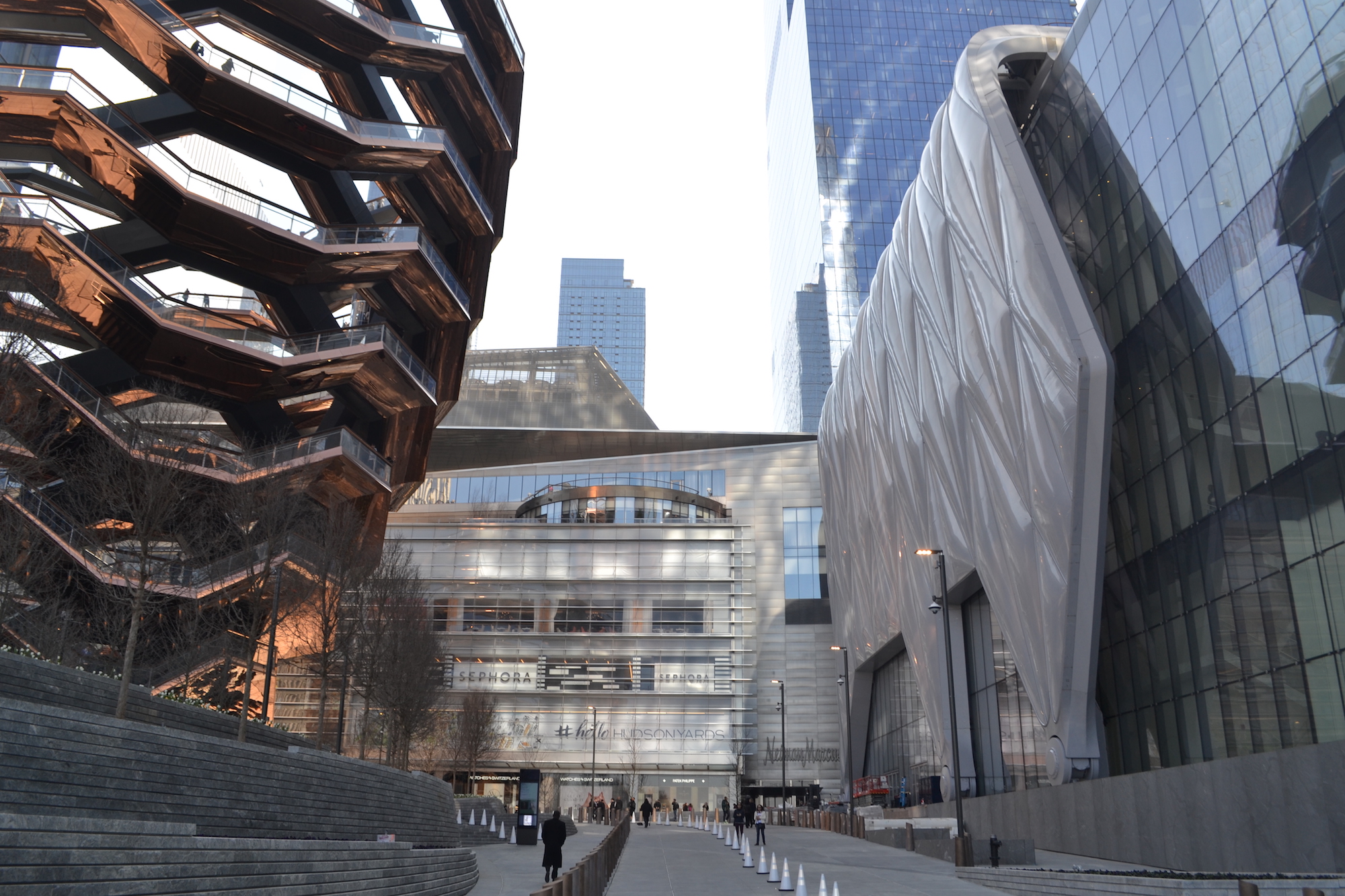 Vessel, the mall, the Shed.

These are strange days in New York. This morning, I voted by phone to weigh in on the city council’s Participatory Budgeting Cycle, deciding whether some $1 million allocated to my district should be spent on street-safety improvements, bathroom renovations at public schools, or other things that did not sound like they should be optional.

Then I got on the subway, which often does not work well but did today, and headed over to Hudson Yards to have a first look inside the Shed, the $500 million arts center—designed by Diller Scofidio + Renfro with the Rockwell Group—that certain civic leaders have built right next to a luxurious mall, pricy condos, office towers, and Thomas Heatherwick’s absurd $150 million Vessel.

It has never been exactly clear why Manhattan, so filled with arts institutions, needed a new one, much less one with 200,000 square feet and a half-billion-dollar price tag. But after more than a decade of planning that grew out of a failed attempt by the Bloomberg administration to lure the Olympics, the Shed has arrived—with a vigorously multidisciplinary program, overseen by Alex Poots, set to begin on Friday.

At a press conference on Wednesday morning, a few of the big movers behind the initiative assembled to explain it all in the McCourt, the Shed’s hallmark space—a cavernous 17,000-square-foot hall covered by a soaring, retractable roof resembling bubble wrap or a rippled garbage bag that moves on wheels that are six feet in diameter. Sadly, the rolling roof was not activated today. (The space’s name comes from Frank H. McCourt Jr., the businessman who put $45 million toward the project.)

What, precisely, is the Shed? Its chair, Dan Doctoroff, who came to the initiative as an investor and then became a deputy mayor under Bloomberg, delivered a straightforward answer. “A shed is defined as an open-ended structure with tools,” he said. “That’s what the Shed is designed to be—a platform, a uniquely adaptable building, able to liberate artists to fulfill their dreams.” (Bloomberg himself gave $75 million to the project and the building bears his name.)

The Shed is also, per Doctoroff, a “dynamic, one-of-a-kind structure” and “an accessible and adaptable arts organization with global reach,” and the McCourt “is a spectacular space that can do almost anything artists can imagine.” McCourt, the man, described the Shed as “a bold, daring, and now-living example of what I mean by civic imagination: an idea that has been put into action for the greater good.”

In town from London, where he directs the Serpentine Galleries, Shed artistic adviser Hans Ulrich Obrist likened the enterprise to visionary architect Cedric Price’s Fun Palace, a never-built multiuse building aimed at providing entertainment and education to large numbers of people. Architect Liz Diller has also cited the Fun Palace as an inspiration, and thinking back a decade, to when she and her team were working on a design for a building without a clear mandate, this morning said she and her collaborators conceived of the Shed as “an anti-institutional institution that would house all the arts under one roof in a building responsive to the ever-changing needs of artists in all media, at all scales, indoors and out, into a future we could not predict.” She also termed it “a perpetual work in progress.”

Poots, for his part, called the Shed “a place for invention, for curiosity, for risk-taking.” He spoke of wanting it to be “decentered” and able to go “beyond binaries, of art and the sacred, East and West, public and private.”

Businessman Jonathan Tisch, the Shed’s vice chair, offered the most piquant remarks. “There are many cultural institutions that are truly world-class in our town, but some of them tend to be about the past,” he said. “The Shed is about, once again, the future.”

That future involves presenting new commissions in a number of quite-impressive spaces. Besides the McCourt, which can house 2,000 standing people and will debut with performances of African-American music organized by artist and director Steve McQueen, there’s the 11,700-square-foot Kenneth C. Griffin Theater (named for the hedge-funder who recently snapped up a $238 million penthouse in Midtown and gave $25 million to the project). That space will first be used to present Norma Jeane Baker of Troy, a theatrical work by poet Anne Carson with Renée Fleming and Ben Whishaw in starring roles. Then there are two column-free gallery spaces (without donor names, as of yet), one of them a home for an ambitious-looking production involving Gerhard Richter, Arvo Pärt, and Steve Reich. (The other will showcase work by the great Trisha Donnelly but, regrettably, it was not yet on view.)

Escalators along one side of the Shed provide views of nearby towers as they lead up to the Tisch Skylights—an open space on the top floor, where, during my visit, some pretty awesome sword-fighting practice was underway for Dragon Spring Phoenix Rise, a “futuristic kung fu musical” by director Chen Shi-Zheng and screenwriters Jonathan Aibel and Glenn Berger (the latter two of Kung Fu Panda fame) that will be staged at the Shed in June.

I will admit to not being entirely sure what to make of all this—this hulking palace for new art that espouses a desire to please every kind of artist and audience.

It’s too soon to begin to hazard what the legacy of the Shed might be, or even to assess the general tenor of its programming. But it does feel a bit like a fever dream from another time, out of step with a moment when the city’s government is working concertedly to increase funding for institutions throughout the five boroughs, and beyond the monied sections of Manhattan.

That said, Tamara McCaw, the Shed’s chief civic program officer, spoke about the organization’s commitment to collaborating on projects with its neighbors and low-income residents throughout the city. And, aiming to attract diverse audiences, the institution is setting aside reduced-price tickets for every show. Poots emphasized that he’s committed to commissioning work not only from the famed and lauded but also from emerging talents. As Zachary Woolfe has written convincingly in the New York Times, a key measure of the Shed’s success should be how well it supports artists—and the city needs “significant investment in artistic development, over years and years.”

The danger, as Woolfe notes, is that the Shed becomes just another venue (the largest and priciest one yet) for what we might call Prestige Art: big-ticket productions by well-worn names that have brief runs and then disappear from memory. These are top-down initiatives: art spawned by huge deployments of capital.

But the most exciting, and most memorable, cultural experiences I’ve had in New York have been precisely the opposite: they’ve been built from the ground up, born of necessity, sometimes improvised, and often barely pulled off. I’m talking about ramshackle art shows in apartments and studios, and concerts in out-of-the-way lofts and bars. It cannot be said often enough that such productions are becoming more and more difficult to create in a city that is growing increasingly expensive.

Can the Shed leadership help foster work that is similarly vital, under-seen, and—to use a word favored by Obrist—urgent? Can it build a wide and deep audience for its many ambitions—and a wide and deep array of funders? It would be crazy not to root for it to succeed at all of that.

Today, however, 10 years into a slow and uneven growth cycle that has seen the city become even more of a gleaming shopping mall, the comments that stuck with me, uncomfortably, amid all the talk of the future and flexibility and platforms, came from Diller as she described the start of her work on the Shed. “It was 2008,” she said. “It was the height of the recession. And the project seemed improbable. As we all know, art is the first to get cut when there’s an economic crisis.”

Vessel, the mall, the Shed.

Ready to roll: the Shed.

In the lobby. A number of flower bouquets grace the Shed right now, worthy of La Grenouille.

Hans Ulrich Obrist inside the McCourt, a cavernous hall with a retractable roof, ready for any occasion.

Looking down into the McCourt.

Looking to the ceilings in the McCourt.

Inside the Shed, escalators connect the lobby to even-numbered floors, which are home to most of the public areas.

The Shed: up close.

A full wall of Richter.

From the top floor Tisch Skylights, a view of Vessel—and the mall.

Nearby train yards, where an expansion of Hudson Yards is scheduled to be built.