Spanning several decades’ worth of epochal African-American and African-diasporan art, including work by Norman Lewis, Jack Whitten, Sam Gilliam, Melvin Edwards, Theaster Gates, Lorna Simpson, Julie Mehretu, Kevin Beasley, and more, the collection of Pamela J. Joyner and Alfred J. Giuffrida will be the subject of a traveling exhibition starting in September 2017 and running into early 2020. The five locations on the itinerary thus far are the Ogden Museum of Southern Art, in New Orleans; the Nasher Museum of Art, at Duke University in North Carolina; the Snite Museum of Art, at the University of Notre Dame in Indiana; the Baltimore Museum of Art; and the Berkeley Art Museum and Pacific Film Archive, in California.

Joyner, who along with her husband Giuffrida was named an ARTnews Top 200 collector last year, will also be honored by the Brooklyn Museum at a benefit next week for the museum’s Fund for African American Art. The event will kick off with a series of “rapid-fire conversations,” open to the public for $25, in which artists including Simone Leigh, Hugo McCloud, Mehretu, and Whitten will hold forth on the influence of an older artist of African descent with curator Rujeko Hockley. After that, the event turns into a reception and dinner for patrons paying $1,000 to $25,000 to support a fund focused on acquisitions of African-American art from before 1945.

Four Generations: The Joyner/Giuffrida Collection of Abstract Art, published last year by Gregory R. Miller & Co., surveys the duo’s holdings with lavish illustrations and momentous texts by international museum directors and curators working in the energetic milieu of African-descended art from the present and the past. The volume’s editor, the curator and art historian Courtney J. Martin, was recently named deputy director and chief curator of the Dia Art Foundation in New York. Christopher Bedford, a contributor to the book as well as the director of the Baltimore Museum of Art, worked as co-curator—along with Katy Siegel—of the exhibition. 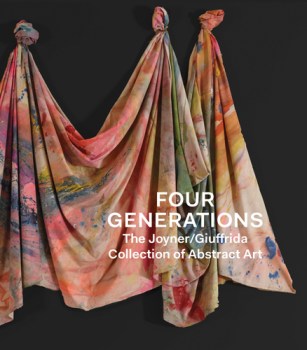 About the provenance of artworks in the show, to be titled “Solidary and Solitary: The Pamela J. Joyner and Alfred J. Giuffrida Collection,” Bedford told ARTnews, “Pamela has committed herself to correcting very specific aspects of the American canon, which entails the contribution of black Americans to the rise and development of modernism and postmodernism into contemporary painting and sculpture. Her narrow range of address and discipline as a collector have permitted her to develop an account of that tendency that no museum in the country is able to present.”

The couple’s “creative thinking and financial activism,” Bedford said, have influenced certain museums’ approaches to historical corrections collectively underway—and the show has been conceived to continue the activity. “When I imagine the collection at the Baltimore Museum of Art in 10 to 20 years, I imagine an inclusive history, to integrate white Americans with black Americans and the contributions of Latinos, Asians, and others. We do a very poor job of that as a museum community. This exhibition shows everything that is missing.”

A 5,000-square-foot iteration of the show will be the standard, to be toured with support from the Helis Foundation, an enterprise focused on initiatives for New Orleans and special projects beyond. A larger version is slated for Baltimore and at least one other locale—”an institution I can’t disclose quite yet,” Bedford said—that would scale it up considerably, to 10,000 to 12,000 square feet.

“If one’s objective is to turn an institution inside-out to face a different constituency with a different tenor of show,” Bedford said, “this prospect would be perfect for that aspiration.”

UFC 276 Live Stream: How to Watch Adesanya vs. Cannonier Online