A recent report from the National Endowment for the Arts (NEA) and the Bureau of Economic Analysis (BEA) shows how the arts industry was disproportionately affected by the coronavirus when compared to the overall U.S. economy.

According to the report, the arts industry shrank at nearly twice the rate of the country’s GDP between 2019 and 2020. Amid the rise of the highly contagious virus, museums, galleries, and entertainment venues were shuttered nationwide, leaving almost 1.4 million arts workers unemployed.

The industry has regained strength, the NEA reports, but it has not yet reached pre-pandemic levels. However, the organization expressed a positive outlook about the sector’s value, stating that its “size and diversity” helped it retain a significant role in the overall economy.

The report’s authors drew economic data from 35 segments of the art and cultural field. Performing arts understandably reported the most losses in the cultural industry, diminishing by more than 73 percent and joining oil drilling and air transportation as one of the steepest-declining areas of the U.S. economy. The film industry trailed not far behind, with 136,000 jobs lost amid sweeping shutdowns of productions; construction on new arts and cultural facilities also declined by a notable 24.3 percent.

Unemployment across the arts industry rose from 3.7 percent in 2019 to 10.3 percent in 2020, but fell last year to 7.2 percent. The study excluded self-employed arts workers in its data. 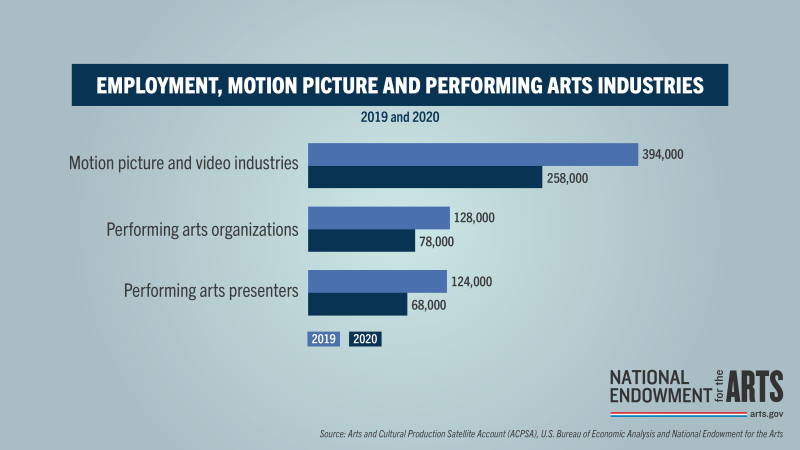 As the average daily number of Covid-19 cases continue to fall in the United States, and as hospitalizations appear to follow the same trend, the arts industry is estimated to recoup some losses this year.

Within one year, the performing arts segment doubled its revenue in the third quarter, rising from a devastating $834 million in 2020 to $1.7 billion in 2021—a far cry, still, from the $12.7 billion earned in 2019. Several areas of the industry even expanded during the pandemic. With most in-person events cancelled, companies heavily invested in web publishing and streaming; 12,000 jobs were added in the field and revenue leapt by 14.3 percent, accounting for the $876.7 billion in value contributed by the arts sector to the national economy in 2020.

“While arts and cultural industries and workers nationwide have sustained heavy losses, the sector continues to play an outsized role in the U.S. economy—as the new data demonstrate,” NEA chair Rosaria Jackson said in a statement. “The NEA is committed to participating as a key partner in the recovery of this sector, recognizing not only its economic value, but also the arts’ capacity to transform the lives of individuals and communities in other ways, contributing to health and well-being, and overall resilience.”