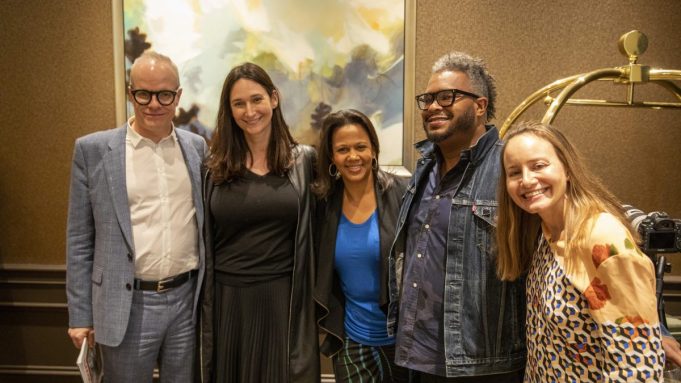 During the panel the Whitneys spoke about their interest in patronage of such institutions as CalArts, getting to know artists as individuals, and how they got involved in the art world in Los Angeles and beyond. “All this art we live with, there’s an energy emanating from it,” said Tina. “It is a privilege to get to buy this work and live with it.” Since 2012, the couple—Ric is a music publishing and talent management entrepreneur, and Tina is president of Oprah Winfrey Network—have been building a collection that is diverse not only in terms of the artists’ ethnicity and gender, but in medium, comprising sculpture, installation, painting, and photography. Among the artists whose work they hold are Charles Gaines, Genevieve Gaignard, Joe Goode, Henry Taylor, Sadie Barnette, David Shrigley, Thinh Nguyen, and many others.

Engström depicts surreal landscapes textured with whimsical flora and fauna. Atmospheric brushstrokes punctuate canvases brimming with bright Fauvist colors. Husa makes an appearance here, but she has receded to a background character, thereby allowing Engström to explore deeper feminist and sexualized themes. Engström’s work draws in the viewer with beautiful expressions of color and form while simultaneously challenging the perception of nature and gender.

The Four Seasons hosted a reception at the on-site restaurant Culina to celebrate the partnership with Engström and Leatham, who both attended. Four Seasons Chef Luca Moriconi served a menu of canapés and cocktails inspired by the art. At the center of the outdoor celebration was an igloo pop-up with nitrogen ice cream handmade to each guest’s preference.