Get gluing! A must-have for all kinds of crafting and DIY projects, a hot glue gun is a great addition to any tool kit. While hot glue guns with cords limit your mobility and can get tangled, a cordless model gives you maximum flexibility as you work. Invented in the late 1940s, the glue gun was developed after Boston native George Schultz watched shoemakers burn themselves while scooping hot glue out of a pot. His first model, a simple and bulky affair, was called the Polygun. Shultz would hardly recognize today’s sleek and capable versions. To choose a model that’s right for you, browse our roundup of the best cordless options below.

This cordless hot glue gun checks all the boxes: It melts glue in little time, feels comfortable in the hand, and has an ultralong run time, with its 4-amp-hour battery able to operate for up to three and a half continuous hours without having to be recharged. It also has safety features, such as an LED indicator light that lets you know when the device is switched on. For ease of use and extra control over the glue stream, the trigger is large enough to support two fingers, and the rubber grip ensures a secure hold. The tool comes with three glue sticks. 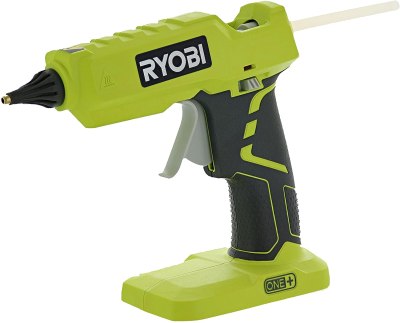 If your projects mostly involve gluing in tight spaces or on small surfaces, consider getting a glue gun that uses mini glue sticks. This one heats up in just two minutes and zippily dispenses glue at a rate of 5 grams per minute. Best of all, a two-hour charge gets you nearly the same amount of working time. It’s available in blue and pink, and if you buy the pink model, 20 cents of your purchase goes to the National Breast Cancer Foundation. The gun comes with 20 mini glue sticks and a USB charging cable.

This cordless glue gun prioritizes safety. As its name suggests, it is a low temperature gun less likely to burn inexperienced users or children. It comes with 12 specially formulated mini glue sticks that melt at a lower temperature, making it ideal for securing lightweight or delicate craft materials (think paper, fabric, and other common scrapbooking supplies) that need a cooler adhesive. Note that this gun is not suitable for jobs requiring the stronger bond provided by high-temperature glues.

This handy device isn’t shaped like a glue gun, but it essentially works just like one. It features a penlike metal body that holds dried pellets of glue, melts them down, and gradually feeds them through a nozzle that resembles a nib. This design allows you to keep your hand extra close to the target area, making the device more controllable than a traditional glue gun, The glue comes out waxy and soft and dries quickly, and the nozzle dispenses fine, even lines. It’s powered by a 2.2-amp-hour rechargeable battery that keeps going for up to two hours on a full charge. 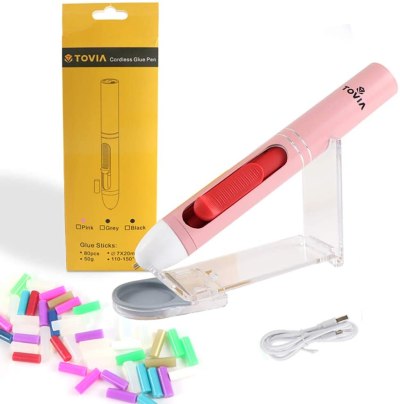 Yes, this is an expensive glue gun, but it will meet the needs of your most demanding jobs. With 60 watts of heating power, it reaches a high melting point in minutes and is compatible with glue sticks as small as 0.43 inches in diameter to 0.5 inch in diameter. Since it operates with 50 percent more power than a standard glue gun, this tool can put out more than a pound of glue per hour and cover large areas of nonporous materials. Using a 4.0-amp-hour battery, it runs up to three and a half hours per full charge. It comes with its own charging station, and the long, easy-squeeze trigger and handle design makes for a comfortable hold. 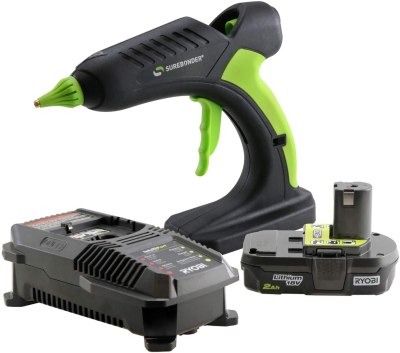 Sports Power Attorneys Tied to Boehly, Tepper and Others Jump to New Firm