The comedian Groucho Marx once said, “I refuse to join any club that would have me as a member,” as apt a summary of Dada (which took its name from the French for “hobbyhorse”) as any. Tristan Tzara, the movement’s cofounder, put it somewhat differently in his Dada Manifesto. “The true dadas are against DADA,” he wrote. “In principle I am against manifestos, as I am against principles.” Along with Hugo Ball, Tzara was leader of a tiny band of poets and artists who gathered during February of 1916 at a nightspot in Zurich called the Cabaret Voltaire. There, over several weeks, they mounted evenings of performative mayhem that often involved preposterous costumes and nonsensical recitals. Europe was at war, and an entire generation of young men was being fed into the wood chipper that was the Western Front. The old order was crumbling, “ruined” as Ball put it, “by the filthy hands of capital,” and for Tzara and company, the only sane reaction was to revel in the absurd, for which Cabaret Voltaire provided an outlet. Soon what began as a series of nihilistic pranks would spread to become a set of precepts that redirected the course of art history in the 20th century and beyond. Just how that happened is the subject of our list of recommended books below. (Prices and availability current at time of publication.)

1. Francis M. Naumann, New York Dada 1915–23
Although Dada originated in 1916 in Zurich before spreading to Hanover, Berlin, Cologne, and Paris, no city echoed its anarchic spirit like New York. “Dada [is] . . . no match for the wild and chaotic streets of New York,” the artist Man Ray once wrote. “All New York is Dada and will not tolerate a rival.” As Francis M. Naumann notes in this seminal history on the subject, Man Ray was one of a group of American and European avant-gardists working in the city who were retroactively assigned the New York Dada label because they shared a similar iconoclastic attitude. Chief among them was Marcel Duchamp, whose Nude Descending a Staircase and Readymade urinal, Fountain, created an uproar at the 1913 Armory Show and the 1917 Society of Independent Artists exhibition, respectively. Originally published in 1994, Naumann’s book is based on interviews with surviving members of the scene; it also contains rare newspaper clippings and photographs, including archival images of exhibitions and collections.
Purchase: New York Dada 1915–23 from $13.17 (used) on Amazon 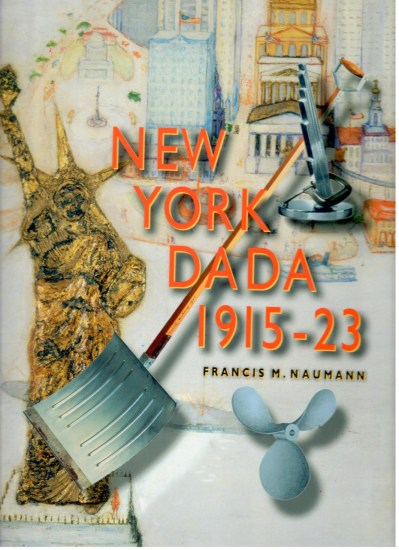 2. Hans Richter, Dada: Art and Anti-Art
Originally published in 1964, Dada: Art and Anti-Art offers a lively first-hand history of the movement by one of its notable participants, the German artist Hans Richter (1888–1976). A painter and a graphic designer, Richter was best known for his avant-garde films, such as his abstract animation Rhythmus 21 (1921); in the book, he follows the course of Dada from its origins in 1916, in Zurich, to its dissolution during the following decade when it was superseded by Surrealism. Richter recalls Dada’s various manifestations in Zurich, Berlin, Hanover, Paris, and New York, focusing on the work and interactions of its key players, which included Hugo Ball, Tristan Tzara, Francis Picabia, Jean Arp, Kurt Schwitters, Raoul Hausmann, Marcel Duchamp, Max Ernst, and Man Ray, among others. Richter’s account is bolstered by documents, illustrations, and texts by fellow Dadaists, making the book a primary source on this fascinating chapter in modern art.
Purchase: Dada: Art and Anti-Art $23.95 (new) on Amazon

3. Dadaglobe Reconstructed
In 1921, the poet Tristan Tzara planned to publish Dadaglobe, a definitive compendium on the movement he was so instrumental in creating. The plan was to include more than 100 artworks by some 30 artists from seven countries, with the idea of documenting Dada as an international phenomenon. Dadaglobe was also something of a swan song, since by then many of its artists had defected to André Breton’s Surrealist circle in Paris. Tzara was aided by Francis Picabia, but a lack of funding forced them to abandon the project. Based on extensive research by art historian and curator Adrian Sudhalter, Dadaglobe Reconstructed accompanied a 2016 exhibition of the same name that opened at the Kunsthaus Zürich before traveling to the Museum of Modern Art (MoMA) in New York. This posthumous realization of Tzara’s ambition to codify Dada comes complete with the drawings, photographs of artworks, self-portraits, and layouts that had been submitted for the original.
Purchase: Dadaglobe Reconstructed from $63.90 (used) on Amazon

4. Leah Dickerman, et al., Dada: Zurich, Berlin, Hannover, Cologne, New York, Paris
Dada was poorly understood in mid-century America, where art critics dismissed it as an avant-garde lark. This was due, in part, to the Dadaists themselves, who never intended their work to be co-opted by the establishment. That began to change in the 1960s when the rise of both Pop Art and the counterculture took Dada’s tone of absurdist anarchy mainstream. Yet no museum in the United States hosted a Dada survey until 2006, when a major exhibition organized by the Centre Georges Pompidou in Paris traveled to Washington’s National Gallery and MoMA. This companion catalog to the show follows the latter’s exhaustive approach to unpacking Dada’s development in the titular cities, giving each its own chapter featuring essays and color plates. There’s a section devoted to artist biographies, and another providing a chronology of the movement, making this volume the most comprehensive of its kind.
Purchase: Dada: Zurich, Berlin, Hannover, Cologne, New York, Paris $29.95 (new) on Amazon

5. Robert Motherwell, ed., The Dada Painters and Poets: An Anthology
The youngest member of the postwar New York School, Robert Motherwell (1915–1991) is generally remembered as the Abstract Expressionist painter behind the monumental “Elegy to the Spanish Republic” series. Yet he was also a writer who published this book on Dada in 1951, at a time when it was still considered something of a sideshow to other modernist movements such as Cubism and Surrealism. It was also when some of the major figures of Dada—Marcel Duchamp, Jean Arp, and Max Ernst among them—were still alive and able to collaborate with Motherwell on gathering material for this study, one of the first of its kind. The result is a primary-source compendium of essays, manifestos, and illustrations including photographs of Dada’s key participants—poets and artists alike—along with reproductions or facsimiles of their efforts. Motherwell’s book remains a landmark in divining the art-historical significance of Dada.
Purchase: The Dada Painters and Poets: An Anthology $41.29 (new) on Amazon

6. Jed Rasula, Destruction Was My Beatrice: Dada and the Unmaking of the Twentieth Century
A professor of modernism at the University of Georgia in Athens, Jed Rasula frames the story of Dada as unique among the avant-garde movements of the 20th century in that it has remained relevant to contemporary art in ways that other modern isms have not. According to Rasula, this is because its participants refused to have their efforts pigeonholed, which effectively inoculated Dada against becoming an officially canonized genre. Rasula’s account begins with Dada’s beginnings in Zurich, but much as Francis Naumann does in his book, Rasula cites the key role New York played in providing a nurturing environment for the movement—noting, for example, how the improvisational structure of American jazz may have influenced Dada’s own freneticism. He covers developments on the Continent as well, exploring how Dada differed in France (where it was more sensationalized) and Germany (where it was more politicized). As his book’s title suggests, Rasula contextualizes Dada as an ur-expression of creative destruction.
Purchase: Destruction Was My Beatrice $26.66 (new) on Amazon

7. Rudolf Kuenzli, Dada
Rudolf Kuenzli, a professor of English and comparative literature and director of the International Dada Archive at the University of Iowa, teamed up with art book publisher extraordinaire Phaidon Press for this introductory survey on Dadaism, which will bring any reader up to speed on the significance—and continuing impact on culture today—of this revolutionary, avant-garde movement. It provides a comprehensive examination of Dada’s myriad activities in writing, performance, social experimentation, and (of course) art. The artworks are particularly well served by the book’s oversize format, which accommodates lavish reproductions, each with an accompanying description that explains the work and its place within the larger framework of Dada. Kuenzli himself provides an introductory essay on the movement and the larger social and political context from which it sprang. He writes in a style that’s easy to follow, making this book a must-have for anyone interested in 20th-century art.
Purchase: Dada from $51.63 (used) on Amazon