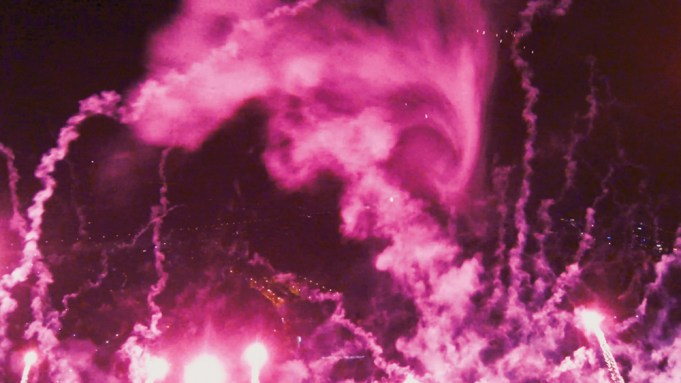 Divided into four chapters, Nightlife begins and ends in Cleveland, a city recently in the news for its systemic police brutality against African Americans. It was also the site of a 1970 Weather Underground bombing, which took place outside the Cleveland Museum of Art, partially destroying a copy of Rodin’s Thinker. Nightlife opens with Gaillard’s camera circling around a digital rendering of the sculpture, slowly revealing its full form. The next chapter is perhaps the most dazzling; shot in Los Angeles, it opens with birds-of-paradise flowers seen in close-up, amid almost strobelike flashes of color. Gaillard lingers lovingly on the flowers, which bob back and forth in unison, as if caught in a breeze. The footage is sped up and slowed down, by turns, so that the flowers’ movement is synced to the music, a looping track that samples Alton Ellis’s 1969 song “Blackman’s Word,” with his lyrical refrain “I was born a loser” repeated like a mantra. Later LA scenes show trash-pocked, razor-wire roadside fences, against which juniper plants sway and unfurl as if animated. Occasionally they release bursts of pollen that glitters and disappears into the night. The cinematography here is exceptionally lush.

Chapter 3 pivots to the Olympiastadion in Berlin, which was built by the Nazis for the 1936 Summer Olympics and is now a multipurpose venue. Gaillard’s camera floats above the stadium during a fireworks festival—a celebration whose frivolity is complicated by the venue’s Fascist history—swooping this way and that as plumes of color and smoke shoot around it. The specter of state-sanctioned violence and Nazi Germany also haunts Nightlife’s final chapter. We see a helicopter from below, its bright searchlight ominously illuminating a building and a large, skeletal tree. The building is in fact the James Ford Rhodes High School, where black Olympian Jesse Owens trained; and the tree was one of four oak saplings that Hitler gifted Owens after the track-and-field athlete won four gold medals at the 1936 games.

It would be easy to assume Gaillard was filming a police helicopter search, the instantly recognizable sort of event in which spotlights scour cityscapes and often housing projects, typically in search of a black suspect. It’s a chilling finale that casts Nightlife’s more buoyant aspects in a sinister light. It leads us to consider how power manifests in the built environment, as well as what kind of power we can call fascist. Of course the Nazi regime is one example, but an American police state is another. And what about the everyday incursions we make into the natural landscape? Gaillard’s “dancing” vegetation is contrasted with blight and human development, as the peppy bushes and flowers are snarled with trash and corralled at the side of the road. Our built world relies on various repressions that we might never blink an eye at. By stringing this chapter together with the others, the artist makes salient parallels. Although sugarcoated, Nightlife is a very bitter pill.