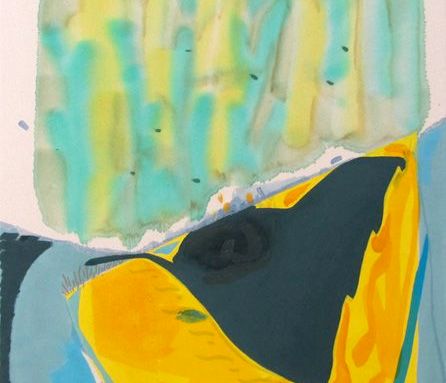 This week we check out the latest in Amy Wilson’s subversively cheery text-heavy paintings and drawings at BravinLee Programs, John Chamberlain’s retrospective at the Guggenheim and a historical survey of the “happenings” at the Pace Gallery.

Amy Wilson at BravinLee Programs, through Mar. 24
“We Dream of Starfish and Geodesic Domes” may be Amy Wilson’s best show yet. Working with the evergreen theme of utopias and the building of new worlds, she offers works in various media from drawing to sculpture and Flash animation. Some of the richly colored acrylic-and-pencil-on-paper works are aptly described by the gallery’s John Lee as “Grandma Moses meets Indian miniatures.”

Benjamin Cottam at Klemens Gasser & Tanja Grunert, through Mar. 17
You may find yourself thinking of, say, John Constable’s or Edward Steichen’s studies of skies when you look at the tiny paintings in Benjamin Cottam’s latest solo show. But they harbor sinister content: these are tear gas canisters bursting in air. Downstairs is a continuation of his ongoing theme, nearly invisible monochrome portraits of his artist colleagues. Don’t walk through and think they’re just fields of color; wait for the faces to emerge.

John Chamberlain at the Guggenheim, through May 13
The jury is still out on the crumpled aluminum sculptures John Chamberlain made in his last years, which appear in the museum atrium and in the final displays, bookending this retrospective. In between, however, is a dazzling array of the crushed auto parts sculptures for which Chamberlain is internationally renowned, serving as a powerful tribute to one of the key figures of post-war American art.

Cindy Sherman at the Museum of Modern Art, through June 11
Whether photographer Cindy Sherman is inventing a unique character or reinforcing a stereotype, hers is always a tour-de-force performance. Organized by Eva Respini in association with Lucy Gallun, both MoMA curators, this exhaustive survey contains some 170 works spanning Sherman’s remarkable 30-year career.

Terry Winters at Matthew Marks, through Apr. 14
Matthew Marks’s large space on 22nd Street is filled with Winters’s latest oversize colorful paintings that, like much of his previous work, mine the mathematical and scientific worlds (think tessellations and knot theory). However it is his mysteriously layered, small-scale collages, on view down the street, that really pull you in. Sometimes, the source material trumps the final product.