Books abound, and many good ones at that. Here are some favorites from 2017, as selected by the editors and writers of ARTnews, with an eye for variety in mind.

The Anti-Museum, eds. Mathieu Copeland and Balthazar Lovay (Fri Art and König Books)
No one would expect an anthology about institutional critique to be easy reading, but The Anti-Museum, in all its 800-page glory, is an engaging tome. It opens with what editor Mathieu Copeland calls “A Retrospective of Closed Exhibitions”—a look back at shows that involved shutting down a space, the most recent of which was a 2016 Maria Eichhorn project for which the Chisenhale Gallery in London closed for nearly a month and all its employees were sent on paid vacation. Reaching as far back as the workings of the 1950s Japanese avant-garde collective Hi-Red Center, The Anti-Museum intelligently draws a line between institutional critique of yesteryear and work by younger artists in the present, among them Zach Blas, Mai-Thu Perret, and Pussy Riot. Let’s hope for a second edition that includes Hannah Black’s open letter about Dana Schutz’s Open Casket, some of Hito Steyerl’s essays, and other more recent efforts. —Alex Greenberger

Druga Grupa: We’d Done All That Was to Be Done (Okreg Krakowski/Cricoteka)
One of my favorite shows of the year was a retrospective of Druga Grupa, a ‘70s-era Polish art group that mixed heady conceptual gambits with a wily sense of farce and play. Among the works in the show I saw in Krakow were an elaborate array of documentation for a Land Art project that turned out to be fake (what an idea!) and an empty mattress covered with projections of sprawled-out body shapes under sheets beamed from an overhead lens onto the bed below. After wandering around the show in a state of fruitful confusion, I asked a museum attendant about some of the particulars to make sure I wasn’t mistaking what seemed to be so smart but also so expressly funny and strange. “Well, their name translates as Second Group,” the attendant said. “But there was no First Group.” A lot of what I’ve come to love about the wry black-comic sensibility I’ve gleaned from so many Polish people I’ve met during travels there was baked into that one interaction. It’s in the exhibition’s catalogue too, which—as published by Cricoteka, a museum devoted to the storied Polish theater director Tadeusz Kantor but home to other exhibitions too—charts the history of Druga Grupa in English and Polish both. —Andy Battaglia

Pissing Figures 1280-2014, Jean-Claude Lebensztejn (David Zwirner Books)
What kids—and former kids—haven’t delighted in the spectacle of little statues and paintings of putti captured mid-piss, in fountains, lawns, the margins of manuscripts, and even on stacks of books? As Jean-Claude Lebensztejn relates in his charming book Pissing Figures 1280–2014, “Not just anyone makes a good pisser.” Also: “If I asked somebody to do an Oxidation painting, they just wouldn’t think about it and it just would be a mess.” And: “Head and cock have to be in agreement: it’s not enough to just piss, you need to know how to move the instrument and direct the stream.” Here’s to art history and fun projects for the family! —Barbara A. MacAdam 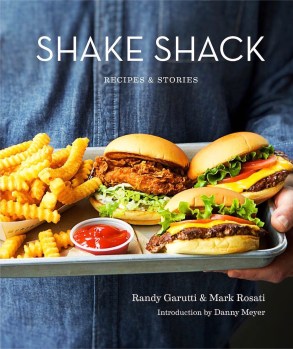 Shake Shack, Randy Garutti and Mark Rosati (Clarkson Potter)
The redoubtable burger and custard company Shake Shack currently has more than 130 locations globally and a market capitalization north of a billion dollars, but it got its start in 2001 as a humble hot dog stand in New York’s Madison Square Park that was part of a Public Art Fund project by the artist Navin Rawanchaikul, as Ben Davis noted earlier this year. Fittingly, this book reads like a superb artist monograph or exhibition catalogue, rich with insights into the history, influences, and process of the Shack. There is a sketch of the original menu (names mercifully vetoed for the company include Custard’s First Stand and Parking Lot) as well as features on collaborators like Paula Scher of Pentagram, which has handled its graphic identity, and James Wines, the founder of architecture firm SITE, which designed its original home, plus beloved bakers and artisans like the folks from Brooklyn piemakers Four & Twenty Blackbirds and the Los Angeles donut specialists Cofax. And then there are the inimitable recipes—for burgers, custards, shakes, concretes, and, of course, the famed dog treat, the Pooch-ini. A must-have. —Andrew Russeth

Duty Free Art: Art in the Age of Planetary Civil War, Hito Steyerl (Verso)
Reading Hito Steyerl occasions all sorts of fits and starts for the unceasing ways I find myself pausing to gape and then try to process gut-punch truths and aphorisms that come across like transmissions from a future that snaps into the present as soon as her identification of it is done. Page by page, line by line, and phrase by phrase, Duty Free Art is a real and disquieting treasure. On the manner in which polyglot online images have migrated out from the internet into offline world: “Images become unplugged and unhinged and start crowding off-screen space. They invade cities, transforming spaces into sites, and reality into realty. They materialize as junkspace, military invasion, and botched plastic surgery.” And then a few lines down: “Artworks are emailed to pop up in bank lobbies designed on fighter-jet software.” All that is laid out on just page two. —Andy Battaglia 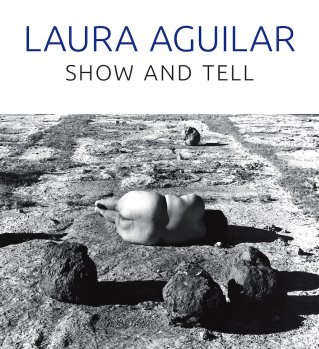 Laura Aguilar: Show and Tell, Rebecca Epstein, editor (University of Washington Press)
Perhaps the breakout show of Pacific Standard Time: LA/LA, the exhibition series focusing on Latin American and Latinx art in Southern California this fall, has been the career retrospective of Laura Aguilar, whose photographs position what many might not consider important, noteworthy, or beautiful as all three of those and more. In a catalogue essay on Aguilar’s “Latina Lesbians” series, curator Sybil Venegas writes, “Intending to combat negative stereotypes both within and outside of the Chicano/Latino community, Aguilar used both image and text to document the women of this unrecognized community with statements of their beauty, strength, and dignity.” One striking photograph, Will Work For #4 (1993), shows the artist standing in front of a wall emblazoned GALLERY as she holds a piece of cardboard reading “Artist Will Work For Axcess.” This image shows what’s at stake with PST: LA/LA: Chicanx artists who have long been marginalized by the mainstream finally getting a moment of recognition. If it lasts, the change will be in part thanks to scholarship provided by catalogues like this one. —Maximilíano Durón

Metaphors on Vision, Stan Brakhage (Anthology Film Archives/Light Industry)
“My eye, tuning toward the imaginary, will go to any wave-lengths for its sights,” Stan Brakhage wrote in his 1963 book Metaphors on Vision. It’s a grandiose statement, but one that is typical of Brakhage and his colorful experimental films, which nobly set out to answer a basic but complex question: what is vision? Metaphors on Vision is secretly one of the filmmaker’s great works, but before this year, it had been out of print for nearly four decades. Thankfully, New York’s Anthology Film Archives and Light Industry remedied that with a lovingly re-printed volume that comes with extra goodies, among them P. Adams Sitney’s introduction to a previous edition of the book in French, old interviews with Brakhage, and a corrected version of the original manuscript. I recommend using the cold weather as an excuse to curl up with the book, preferably as a companion piece to the Criterion Collection’s essential set “By Brakhage: An Anthology,” which brings together 56 of his films, including all five parts of his 1961–64 series “Dog Star Man.” —Alex Greenberger 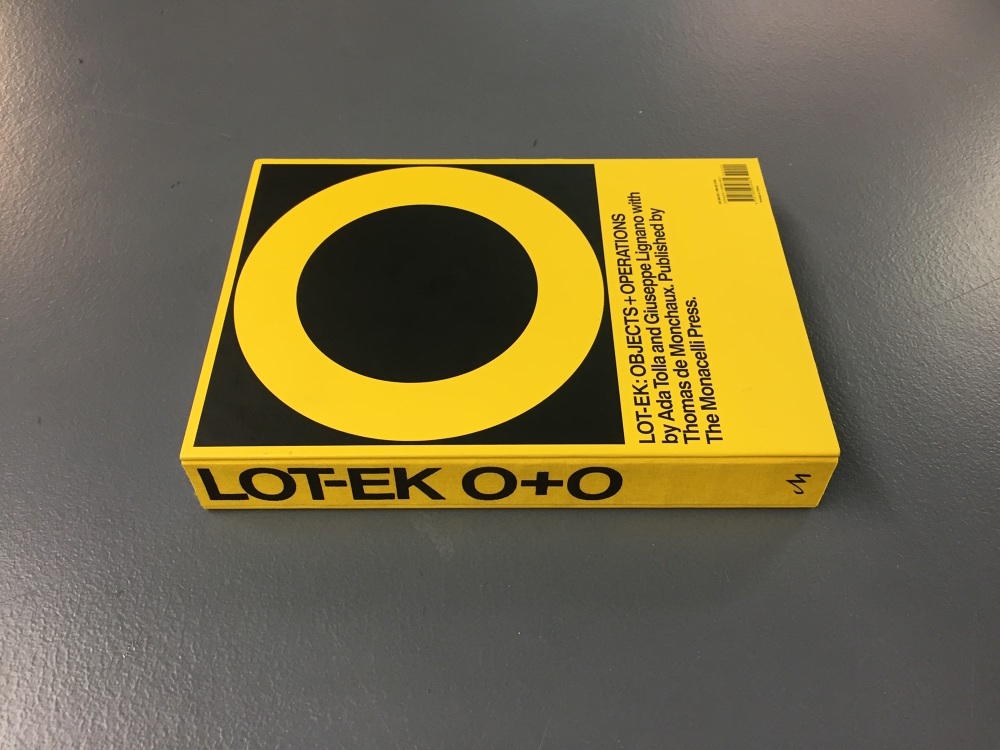 LOT-EK: Objects + Operations, Ada Tolla and Giuseppe Lignano with Thomas de Monchaux (Monacelli Press)
The Naples-born, New York-trained and -based architect duo known as LOT-EK chronicle their habit for cutting up, assembling, and stuffing a world of ideas and Arte Povera–style scraps into shipping containers in this delightfully talky book. Ada Tolla and Giuseppe Lignano, suffering no shortage of intellect or imagination, lay it all bare through chatter and argument. (Lignano: “We bicker all the time.” Tolla: “We don’t bicker that much.”). Then there’s philosophical discussion and talk of process; according to Tolla, “You have to look at things from the wrong side.” Coursing through it all are wry and wise ideas (high and low, folksy and academic) as well as homages to artists, designers, architects, and novelists on pages made of stiff cardboard—a fitting base for showcasing substantial work with a healthy dose of slapstick in the process. As Tolla says, “There is something about the purity of an idea and the impurity of an object.” —Barbara A. MacAdam 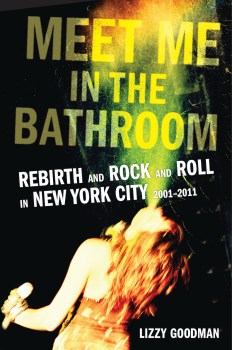 Meet Me in the Bathroom: Rebirth and Rock and Roll in New York City 2001-2011, Lizzie Goodman (Dey Street)
By 1989, the white-hot circuit of galleries in the East Village, most of them nestled in storefronts between Avenue A and Avenue B, had all disappeared. Artists nurtured there had moved on to bigger galleries, and the galleries that survived held their noses and joined the masses in SoHo and, by the late ’90s, Chelsea. From the ashes rose a music scene in the neighborhood that brought about something of a rock renaissance, as surveyed in Meet Me in the Bathroom, a rip-roaring oral history of how the Strokes, Yeah Yeah Yeahs, Interpol, LCD Soundsystem, and other outfits became very important to a very particular set of people. This ain’t no mash note or riff-filled hagiography—no band is spared, no one comes out looking great, and the nasty gossip and name-calling comes from all directions. Even if you’ve never owned any of the records mentioned, it’s a wonderful glimpse at how art was created and consumed in a moment right before we all had computers in our pockets, and before dens for day drunks on the Bowery were turned into branches of TD Bank. The book shows how—after a slow migration of galleries and clubs and artist studios over the course of four or five decades—a perfect storm of rising real-estate prices and evolving ways of cultural consumption can change so much in so little time. —Nate Freeman

Chicana/o Remix: Art and Errata Since the Sixties, Karen Mary Davalos (NYU Press)
In her long-awaited volume, Chicano and Latino Studies scholar Karen Mary Davalos focuses mainly on Los Angeles, a city that has been a locus of many internationally recognized Chicanx artists whose work “is exhibited, collected, documented, and archived, although not at the level of other midcareer American artists.” What makes Chicana/o Remix so groundbreaking is Davalos’s repositioning of her historical focus through interdisciplinary analysis that allows for a more capacious reading of Chicanx art. In her introduction, she writes, “My goal is to question art history’s structures, methods, and institutions. If I am successful, my narration will draw attention to the ways Chicana/o art is a decolonial practice. This book is itself a function of the decolonial imaginary and ‘a form of reparation.’ ” —Maximilíano Durón

How to Watch ‘House of the Dragon’: Stream the ‘Game of Thrones’ Prequel Online

The Best Bookshelf Speakers for Your Bedroom, Office or Den