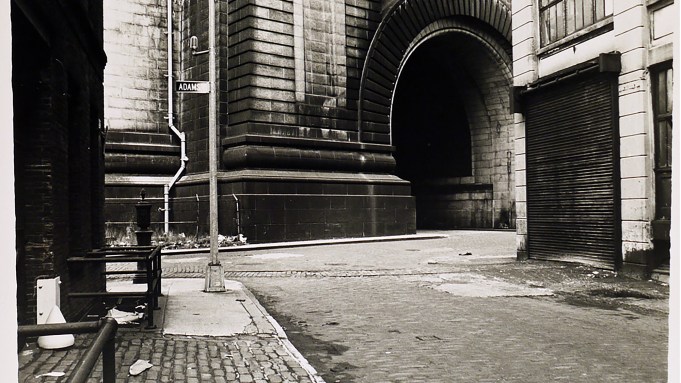 The bustling streets, bars, subways, and tourist attractions of New York City have largely gone quiet over the past few weeks, as residents across the five boroughs have stayed indoors to prevent the further spread of Covid-19. Some left the city for the suburbs and the country. Most businesses, except for those deemed essential, have closed indefinitely. The ongoing pandemic has brought the city that never sleeps to a grinding halt. In a word, New York is empty.

It’s eerily poignant, then, that one of the century’s most important photographers envisioned a vacant Big Apple more than five decades ago. Around 1964, Duane Michals produced a suite of photographs called “Empty New York.” He shows the city’s streets, parks, bars, subways and buses, butcher shops, and coffee shops all devoid of people. Michals photographed these scenes early in the morning, just before the city seemed to rouse from a short cat nap.

Referring to the artist’s approach to photography in the catalogue for Michals’s 2014 career retrospective, titled “Storyteller: The Photographs of Duane Michals,” at the Carnegie Museum of Art in Pittsburgh, the show’s curator, Linda Benedict-Jones, wrote, “Michals often poses big questions that have no easy answers. His images provide a pathway to our own thoughts and fears, our own recollections of growing up, our own dreams and desires, our own concerns about the passage of time and death. He takes us to places we hadn’t planned on visiting; yet when we go there with him, the surroundings are strangely familiar.”

Michals did not formally train in photography, so he was quick to break with conventions that were already established over the course of the medium’s short existence. Disregarding Henri Cartier-Bresson’s influential idea of a “decisive moment,” Michals is best known for creating sequences of photographs that hint at narratives. Two men simply passing each other in an alley becomes a scene of gay men, likely closeted, cruising each other. The evolution of their glances gives away in a single picture what otherwise might have gone hidden.

“Empty New York” is unlike a large part of Michals’s oeuvre, then, in that it offers memorable images that stand on their own. Taken together, these pictures suggest a more sinister and more beautiful New York than the one that was captured by modernists like Alfred Stieglitz, Berenice Abbott, Paul Strand, and Garry Winogrand.

In 2014, Michals’s New York gallery, DC Moore, presented an exhibition of the series, and also showed examples from it in its booth at the Armory Show in New York in February—days before New Yorkers slowly began sheltering in place. Michals took inspiration for the series from Eugène Atget’s attention to the streets of Paris, which he learned about through a book of the 19th-century French photographer’s images.

“Everything was theatre; even the most ordinary event was an act in the drama of my little life,” Michals said in a press release accompanying the 2014 show at DC Moore. “Everywhere seemed a stage set. I would awaken early on Sunday mornings and wander through New York with my camera, peering into shop windows and down cul-de-sacs with a bemused Atget looking over my shoulder.”

Michals has said he considers his approach to photography a failure, in a way. Printed on the front endpaper of the “Storyteller” catalogue, in his typical handwritten scrawl, is Michals’s views on his own artistic efforts: “A FAILED ATTEMPT TO PHOTOGRAPH REALITY / How foolish of me to believe that it would be that easy. I had confused the appearances of trees and automobiles and people with reality itself and believed that a photograph of these appearances to be a photograph of it. It is a melancholy truth that I will never be able to photograph it and can only fail. I am a reflection photographing other reflections within a reflection. To photograph reality is to photograph NOTHING.”